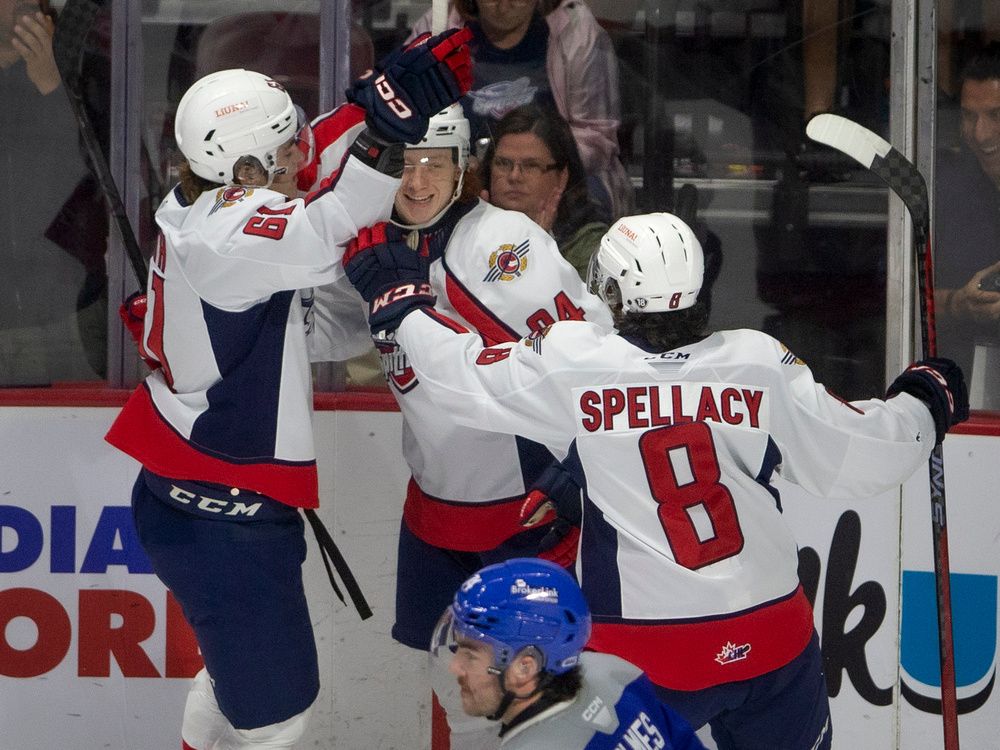 A quick start to the season by the Windsor Spitfires has been boosted by an offence scoring beyond expectations.

“I think, like I said earlier, we have a good team this year and I think we can do just as well this year,” Spitfires’ centre Oliver Peer said. “A lot of guys are stepping up and filling some roles. I feel really confident in our group.”

At the team’s current pace, the Spitfires are on course to score 302 goals. That’s just three back of last year’s league-leading total of 305 goals, which was the first time the club had exceeded 300 goals in 11 years.

“We like scoring goals and our players are generating offence and capitalizing,” Spitfires’ general manager Bill Bowler said. “It’s been a bonus and helped us win games early.”

It’s an impressive feat considering 180 of the 305 goals scored by last year’s team (59 per cent) are from players that are no longer with the club. However, Bowler cautions that nine games is too small a sample to predict how things will play out over 68 games.

“It’s way too early to look at,” Bowler said. “It’s just too small a sample to look at goals for.”

But in many ways, offence is in the blood of the Spitfires. Bowler is the Ontario Hockey League’s career assist leader and third in career scoring. Head coach Marc Savard was a two-time league scoring champ and is seventh in all-time scoring while assistant coach Andy Delmore was the league’s top-scoring defenceman in his final year of junior.

“I think we’re a very motivated group,” said Peer, whose 10 points in nine games have already surpassed his total of nine points in 50 games last season. “I think we’re doing something special with how we’re performing right now at the beginning of the season.”

Unlike a year ago when Savard would load up with Wyatt Johnston, Will Cuylle and Matthew Maggio when the team was in search of offence, the Spitfires have found a little more balance in recent games.

“We seem to have found some lines here,” Savard said. “You’ve got to love Peersy, (Alex) Christopoulos and (Colton) Smith. They’ve got a great mix going and love playing together.

“(Ethan) Miedema, (Ryan) Abraham and (rookie) A.J. Spellacy, I haven’t seen speed like that on a big man like that in a long time and what a line they’ve seemed to form. Mailler (Jacob Maillet), Maggio and (newly acquired Thomas) Johnston, they’re just getting a little bit of chemistry and getting used to each other. (Johnston) hasn’t played a lot of minutes, so he’s getting into the mix. You’ll see some stuff here from him.

“The fourth line, with (Noah) Morneau, is you can put him anywhere on the ice. We’ve got a nice thing going with (Christopher) O’Flaherty, (Jackson) McLlwain and (Liam) Greentree, (Ethan) Martin, whoever is there. They’re doing a good job, too.”

The Spitfires still do not know if Wyatt Johnston, who was the league’s scoring leader a year ago, will ever be returned to the club this season by the NHL’s Dallas Stars, but thus far his absence has not slowed the club.

“They’re believing in there already,” Savard said of his group. “I think, as a group, there’s a good mindset. Guys are pushing and it’s good to see.”

Goalie Ian Michelone had a successful debut with the LaSalle Vipers on Wednesday.

The 18-year-old Michelone was acquired by the Windsor Spitfires on Tuesday from the Flint Firebirds and assigned to the Vipers.

Michelone stopped 29-of-33 shots in the Vipers’ 5-4 win over the Komoka Kings in Western Conference play in the Greater Ontario Junior Hockey League.

Lee Knight, Adriano Tonin, Brady Hamlin, Ashton Anderson and Cole Davis, who is also a Spitfire prospect, provided offensive support for Michelone with a goal each.