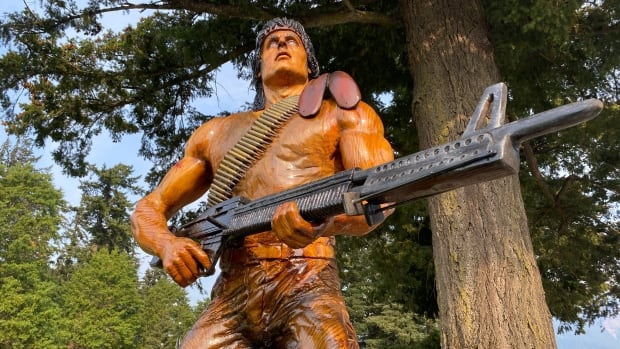 In a famous scene from the 1982 film First Blood, protagonist John Rambo, played by Sylvester Stallone, finds himself surrounded by police and soldiers in the small town of Hope, Wash.

“Nothing is over!” Rambo shouts. “Nothing!”

Decades later, the love affair between First Blood and the B.C. town where it was filmed is definitely not over.

The town of Hope, B.C. served as the fictional setting for the first Rambo film. First Blood was released 40 years ago this month, and the town is going all-out to mark the occasion. The CBC’s Liam Britten was there.

Fans of the film are expected to flock to Hope, B.C., about 150 kilometres east of Vancouver, this weekend to honour the 40th anniversary of the film’s release.

Activities include a skateboard competition, a showing of Rambo-related art, and a three-hour walking tour of locations where the film was shot. A tank is expected to roll over a number of cars on the town’s main street on Sunday.

The film, which became an international smash and spawned several sequels, has Canadian roots. It was directed by Canadian Ted Kotcheff and adapted from a novel written by Canadian author David Morrell, who blasted the most recent Rambo sequel — 2019’s Rambo: Last Blood — calling it “a mess” and saying he was “embarrassed to have my name associated with it.”

The bulk of First Blood was filmed in Hope, something that has become a point of pride for residents.

A large wooden statue of Rambo stands in the middle of town. Ryan Villiers, who carved the statue, is back for the anniversary to create another carving.

“Hope is the culture of Rambo,” he said. “It’s pretty insane to see … the legacy lives on.”

Tracy Paynter with the Hope Visitor Centre and co-organizer of the First Blood event estimates around 15,000 people come to Hope each year because of First Blood.

“It’s important not just to the people of Hope but to the fans all over the world,” she said. “They’re the ones who keep this movie alive and they keep coming back to this town because they love the movie, they love this town.”

It’s been 40 years since the world was introduced to the battle-scarred Vietnam vet John Rambo, when the film First Blood was released. It was filmed in the District of Hope, and no one from Hope will let you forget it. They’ve got a whole weekend of events lined up, and CBC reporter Liam Britten is taking it all in.

Film crews spent around $1 million locally to make the film, which was great for Hope’s economy at the time, and also for B.C.’s.film industry. Decades later, film productions generated $4.8 billion in direct spending for the province’s economy last year, according to the Vancouver Economic Commission.

“This was kind of the birthplace of Hollywood North,” Paynter said. “After First Blood, the rest just followed.”

Sylvester Stallone’s Rambo: Last Blood opened in theatres on Friday. Meanwhile, Hope, B.C., the town where the series’ first film was shot, is still dining out on First Blood.