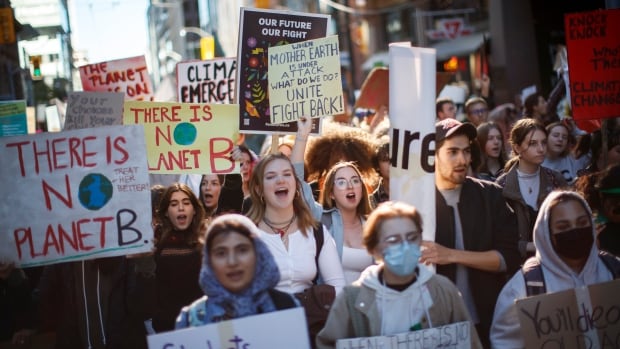 Cora Young was eight years old when she learned in class that polystyrene foam, the clamshell packaging for some fast-food hamburgers, was one of the products containing chemicals responsible for eating away at the Earth’s ozone layer.

“I went home and told my parents we were no longer allowed to eat at fast food restaurants,” said Young.

It was 1989, just two years after an international agreement called the Montreal Protocol was signed, and there was growing awareness of the dangers some products posed to the ozone layer, compromising its ability to shield us from cancer-causing UV radiation.

Aerosols in hairspray and deodorant, along with chemicals in refrigerators and air conditioners, were some other culprits.

Thirty-five years later, the Montreal Protocol has started to heal the ozone layer, although experts say it will take decades longer to restore it.

Today, Young uses it as an example with her own students as an associate professor of atmospheric chemistry at York University in Toronto.

For her students, “it tends to make them, I think, more optimistic that we could do better for other environmental issues going forward, the fact that we’ve been so successful in the past.”

The Montreal Protocol on Substances that Deplete the Ozone Layer was adopted on September 16, 1987 and would eventually set the course for the world to stop manufacturing and using chlorofluorocarbons (CFCs).

It included the ability to adjust the agreement according to new evidence and science, and has averted greenhouse gas emissions, offering lessons for international climate action today.

Getting to international agreement required more than just firm scientific consensus to prompt industry and governments to act.

In 1974, two scientists, Sherwood Rowland and Mario Molina, published a paper arguing that chemicals from aerosols were reaching the stratosphere and eating away at ozone. While their work eventually won them the Nobel Prize in chemistry in 1995, it was not enough to catalyze governments around the world into action.

That happened when the hole in the ozone layer over the Antarctic was discovered in the mid-1980s.

A group of countries met in Vienna in 1985 to discuss the issue, but established they needed more conclusive evidence.

While Rowland and Molina had identified chemicals damaging the ozone layer, how that was happening was not entirely clear. Scientist Susan Solomon would help solidify the picture of what was happening.

She hypothesized that CFCs were reacting on icy, polar stratospheric clouds which formed at very cold temperatures, creating the ozone hole above the Antarctic.

Addressing her theory in a scientific meeting, “people laughed,” she said.

“I didn’t let it worry me because I just was pretty confident that we had the right answer and [it] turned out we did.”

She moved ahead and in 1986, working for the U.S. National Oceanic and Atmospheric Administration, led a team of researchers to the Antarctic to conduct field experiments and successfully verified her theory.

As member countries of the United Nations met in Montreal in September 1987, chemist Bob Watson, then with NASA’s jet propulsion laboratory, was in Chile, leading an experiment to see if he would get the same results as Solomon and her team.

After about a half dozen flights, it was clear to Watson that Solomon was correct. Without a doubt, “we humans were destroying the ozone layer,” he said.

He knew that science alone was not enough in itself to effect change.

The striking satellite images shown on the evening news, combined with increased risk of getting skin cancer if ozone depletion continued, made it easy for people to care.

Even before the Montreal Protocol, individuals were taking action, following campaigns to swap out deodorant, from aerosol spray cans to roll-on styles, for example.

“I can remember, get on the stick to save the ozone layer,” said Solomon.

She describes a few factors that encourage people to act on environmental problems – what she calls the “three Ps.”

“It needs to be personal, perceptible, and you need to have practical solutions,” she said.

When it comes to climate change, coordinated international action has been harder to achieve despite scientific consensus, but Solomon thinks those “three Ps” are coming into focus.

The impacts of global warming might have seemed far off to people in North America for many years, but increased intensity of heat waves, forest fires, and floods have made it both personal and perceptible, she said.

“When those conditions are met, then you’ll have citizen engagement.”

Now the solutions – renewable energy to replace fossil fuels – are getting cheaper and therefore more “practical,” she said.

According to the International Energy Agency, in most cases it’s cheaper to invest in onshore wind or solar panels than it is to make a new fossil fuel power plant.

What On Earth25:51What working together to save the ozone layer tells us about climate action today

What On Earth producer Molly Segal takes a look back in time, when the world agreed to phase out chemicals that were eating away at the Earth’s protective ozone layer.

Getting industry to switch

When the Montreal Protocol was signed, it set up a system for CFCs to be gradually phased out and replaced by other chemicals.

“That sent what I like to call a policy-forcing signal to the industry, that was huge,” said Solomon.

While there was some resistance, ultimately it was clear to companies they would need to adjust. What made that easier, said Solomon, was the same companies that had to stop manufacturing CFCs for, say coolants in refrigerators and air conditioners, could still profit by making the alternatives.

“To be honest, the private sector was probably more on board on the ozone issue than the climate issue,” said Watson.

He said with entire sectors dedicated to extraction of fossil fuels, power generation from fossil fuels, and their use in transportation and agriculture, it’s more challenging to get industry on board compared to regulating a segment of the chemical industry.

What’s at stake financially for fossil fuel companies is much greater than it was for the chemical industry when the Montreal Protocol was signed, said Solomon.

“The companies that produce fossil fuels have massive reasons to stand pat. They own mineral resources that are worth trillions of dollars,” she said.

Although experts estimate the ozone layer’s recovery is slow, continuing at least into the middle of the century, “the Montreal Protocol is widely regarded as one of the most successful international agreements ever,” said Young.

According to the United Nations Environment Program, the protocol is the only UN treaty to date that’s been ratified in all UN member states.

As a legally binding agreement, it has “very explicit goals” of reducing certain chemicals, and by what amount over what period of time, said Bob Watson.

Internationally, governments have struggled when it comes to climate change.

The 1997 Kyoto Protocol on climate change was only signed by industrialized countries, and while it did have “explicit reductions of greenhouse gases on the industrialized world,” said Watson, many countries “ignored it.”

After years with no new agreements, getting countries to sign on to the 2015 Paris Agreement on climate change was a relative success. However, it leaves that power of setting emissions reductions goals – called nationally determined contributions – up to individual countries.

If Watson had his way, the Paris Agreement would have also placed binding targets on every country, with more obligations on industrialized countries.

But, he laments: “There was zero chance, and I mean zero chance it could ever have been negotiated.”

The Montreal Protocol focused on equity to get other countries on board — making wealthier countries with a bigger CFC contribution responsible for supporting less wealthy countries by paying the difference for substitute chemicals.

A peer-reviewed paper estimates the protocol might prevent between 1.2 and 2.7 C of extra warming by 2100. The paper’s author, Paul Young, said in an email this warming would have been caused by more UV light damaging plants’ ability to store carbon, and continued pollution from CFCs left in production

Part of the success of the Montreal Protocol has been its ability to adapt to new science. As countries reduced the use of CFCs, a new family of chemicals called hydrochlorofluorocarbons (HFCs) were subbed in. It turned out, both CFCs and HFCs were contributing to another growing environmental problem: climate change.

The 2016 Kigali Amendment phased out HFCs, and the efforts to lower the impacts of air conditioning, refrigeration, insulation and other products is not over, said Pam Chasek, executive editor of the International Institute for Sustainable Development.

When member countries meet again in Montreal on Oct. 31, they will discuss how the protocol can evolve to promote energy efficiency and alternatives like heat pumps for cooling, while also phasing out HFCs, “especially in developing countries,” wrote Chasek in an email.

For atmospheric chemist Cora Young, who researches the environmental impacts of replacement chemicals, the protocol has made “huge strides in terms of climate protection.”

“That effect will continue and continue on into the future, ultimately preventing multiple degrees of warming of our planet.”