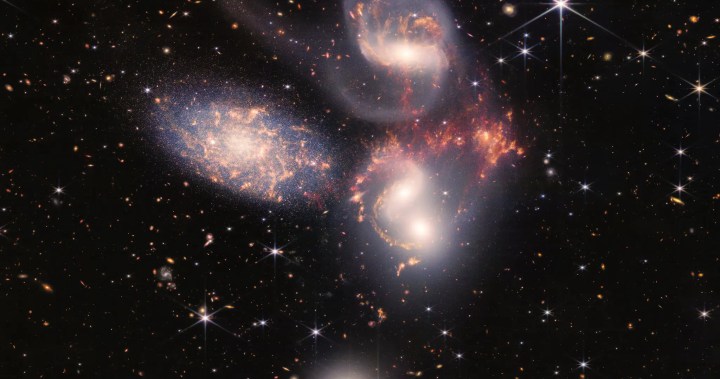 This week, people across the globe were in awe as they received the first images from the James Webb Space Telescope, capturing the deepest view of the cosmos to date.

It was a particularly special moment for astronomers.

Mircin Sawicki is a professor of astronomy at Saint Mary’s University in Halifax. He’s also a Canadian researcher with the Webb telescope team.

Seeing the images released by NASA on Tuesday was a long-awaited moment, he said. It did not disappoint.

“They’re beautiful,” said Sawicki. “They’re better than what we expected.”

The images include a view of a giant gaseous planet outside our solar system, two images of a nebula where stars are born and die in spectacular beauty, and an update of a classic image of five tightly clustered galaxies that dance around each other.

Sawicki is on a team that ensured the Webb could capture these images.

“I’ve been on the so-called ‘instrument science team’ for one of the instruments on Webb that is made in Canada,” he said.

The team began its work more than 20 years ago.

Sawicki said it started off small, but has since grown to more than 20 people, including post-doctorate and graduate students.

The Webb telescope also took pictures of Jupiter. Here’s why you probably missed them

The photos released this week were just a “preview” for researchers, said Sawicki. The main data will start coming out in October.

‘The story of our origins’

There are two main objectives in this research. The first is to find the most distance galaxies in the universe.

“These are the first galaxies that are formed after the Big Bang, and see them as they are being assembled, as they are forming.”

About 13 billion year ago, soon after the Big Bang, researchers theorized the first galaxies were formed.

The Webb telescope was built to discover these, said Sawicki.

Another goal of the research team is to follow these galaxies over cosmic time, and see how they became what they are today.

“Light travels very fast, but it travels at a finite speed. When you look at the moon, you don’t see the moon as it is now, but as it was a second ago.”

The closest star to Earth outside of the solar system is four light years away, said Sawicki, so when we look at it, we see it as it not as it is now, but as it was four years ago.

“You can look at more distant objects, and those are even further away and it took light longer to get to us. Therefore we see them as they were a long time in the past.”

Those galaxies that were formed 13 billion years ago, emitted their light back then – but it’s just reaching us now.

“We’re seeing their images, their appearance as they were back then,” Sawicki said.

As time goes on, researches will be able to compare images of those galaxies and see how they change over time.

The Canadian researcher’s team has a program to observe five massive galaxy clusters, similar to the ones seen in NASA’s photo.

The group is set to receive more photos and data in October.

“This is the story of our origins. This is how we learn about the earliest past of humanity.”

“We were all made in stars, all of the chemical elements in our body were made in distant generations of stars that exploded long ago,” he said.

“When we look at distant galaxies in these images, we are looking at galaxies that made oxygen and nitrogen and iron, that now exists in abundance in our universe. It’s our history.”

— With files from Alicia Draus and Sarah Do Couto.