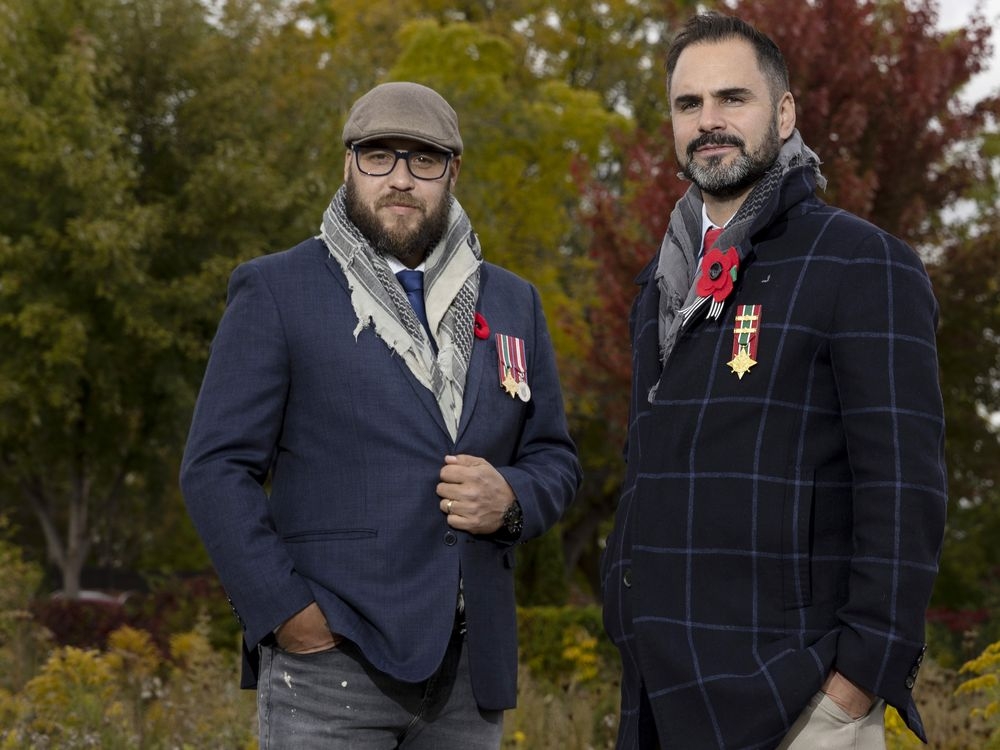 OTTAWA — Two veterans running for municipal council north of Toronto have run afoul of the Royal Canadian Legion for using the image of the poppy on their election campaign signs.

Nickolas Harper and Chris Dupee, both veterans of the war in Afghanistan, say they decided to use the iconic symbol of remembrance so voters in their respective communities would know that they served in uniform.

Dupee, who is running for council in Newmarket, where he lives and owns a mental-health clinic for veterans, said being a veteran is a key part of his identity. It is also an important selling point on the campaign trail as he seeks elected office later this month.

“I’ve got one shot to introduce myself to my community and convince them that I’m the right guy,” he said. “I believe it reflects my commitment to service and that my service never stopped. I just want to shift fire a little bit and serve my community.”

It was only after the legion ordered them to remove the image that they learned the veterans organization owns the trademark to the poppy image, which allows it to control its use in Canada.

The two candidates have covered the poppy on their signs under threat of legal action, but are questioning why the legion has sole control over the image — and why Canadians who have served in uniform aren’t allowed to use it freely.

“If this is how outlandish we have to get in this country, come on,” said Harper, who is running to be a councillor in Bradford. “The poppy is internationally known — it’s a symbol that recognizes veterans and the sacrifices that we’ve made.”

The poppy was adopted as a symbol in Canada and other Commonwealth countries in 1921. But according to legion spokeswoman Nujma Bond, it does not represent all veterans; it represents those who died in service to the country.

It is also central to the legion’s annual fundraising campaign, which generates millions of dollars to support veterans across Canada each year around Remembrance Day.

The poppy image was trademarked by the legion in 1948 following an act in Parliament, which Bond said bestowed sole responsibility for protecting the symbol upon the organization.

That guardianship includes making sure the poppy is not disrespected or used for profit or personal gain — including as a tool for political candidates, no matter their backgrounds or affiliations.

“Poppies and politics do not mix,” Bond said in a statement. “The poppy is a symbol of remembrance of Canada’s fallen and not a tool for political candidates to use on campaign signage — no matter the level of government.”

She added: “We ask that they please find other ways to reflect veteran status during a political campaign.”

Harper and Dupee aren’t the first to be warned against using the poppy without permission; a fundraising campaign also came under the legion’s guns for using the image in 2017.

The legion has also called on online retailers to clamp down on unauthorized sales of the image.

Dupee and Harper say they have complied with the legion’s order by covering the poppies on their signs with stickers, and that they fully respect the importance of remembrance in Canada.

But they are questioning whether it is time to revisit the legion’s sole ownership of the poppy.

“Veterans should be able to use the poppy for any purpose,” Dupee said. “They’ve earned that right beyond anybody else, in my opinion.”

He also knows there are some who will disagree with him — and he welcomes that conversation.

“I think it’s a great opportunity to heighten awareness, update certain policies and have a discussion,” Harper echoed. “If we can make the policy changes, that’s great. If we can have an open dialogue about it, I think that’s great, too.”

The call for an end to the legion’s control over the poppy comes months after supporters of the “Freedom Convoy” were accused of trying to co-opt the Canadian flag for their own purposes.

Asked who would be responsible for making sure the poppy was used in a respectful manner, Dupee suggested that could fall to veterans as well.

“It would be called out at a peer level,” he said. “Not at a legal level, right? … So if somebody’s over the line, I would expect others to call him out or her out, including myself.”