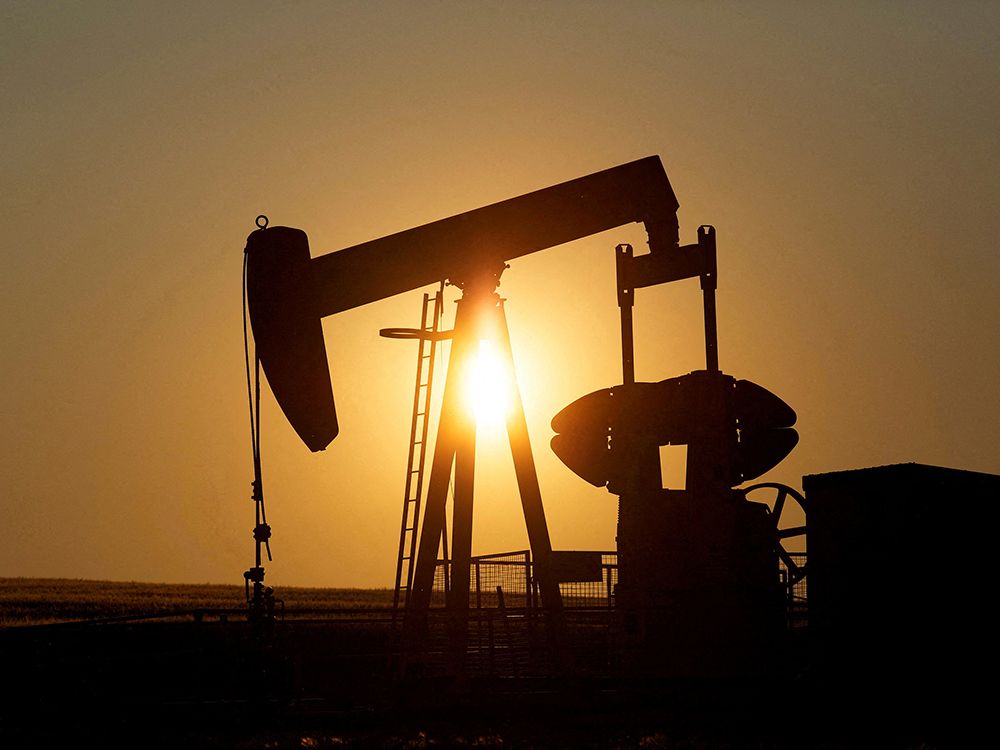 The annual season of Canadian petroleum producers crafting their spending plans for the coming year is now underway and it’s arrived with two conflicting forces at play: dropping oil prices and the fallout from a declining loonie.

Benchmark U.S. crude prices have retreated from early June highs of US$120 a barrel to fall below $80 recently, amid mounting concerns of a looming global recession that could cut demand. West Texas Intermediate crude closed Friday at US$79.49 a barrel, down $1.74.

Analysts say the dip has taken some of the steam out of expected budget increases for 2023.

“This volatility in the markets with oil prices and stock prices is putting a lot of increased capital budgets on hold,” said analyst Jeremy McCrea of Raymond James.

“There’s just increasingly less confidence on where commodity prices are going here over the next year.”

On the flip side, the loonie is falling against a rising U.S. greenback.

A lower Canadian buck bolsters the return for domestic crude and natural gas that’s sold in American currency — and it’s helping producers absorb some of the turbulence.

Earlier this week, Whitecap Resources became one of the first Canadian producers to release its spending plan for next year, announcing a capital budget of $925 million.

It expects to drill about 250 wells in Saskatchewan, Alberta and British Columbia, following Whitecap’s blockbuster $1.9-billion acquisition of XTO Energy Canada in June.

The takeover makes apples-to-apples comparisons between this year’s budget and 2023 tricky; Whitecap’s capital expenditures are pegged at $680 million in 2022.

However, a five-cent drop in the loonie to 73 cents against the U.S. dollar recently has “cushioned” the company from falling oil prices, improving its cash flow levels by $135 million, he said. 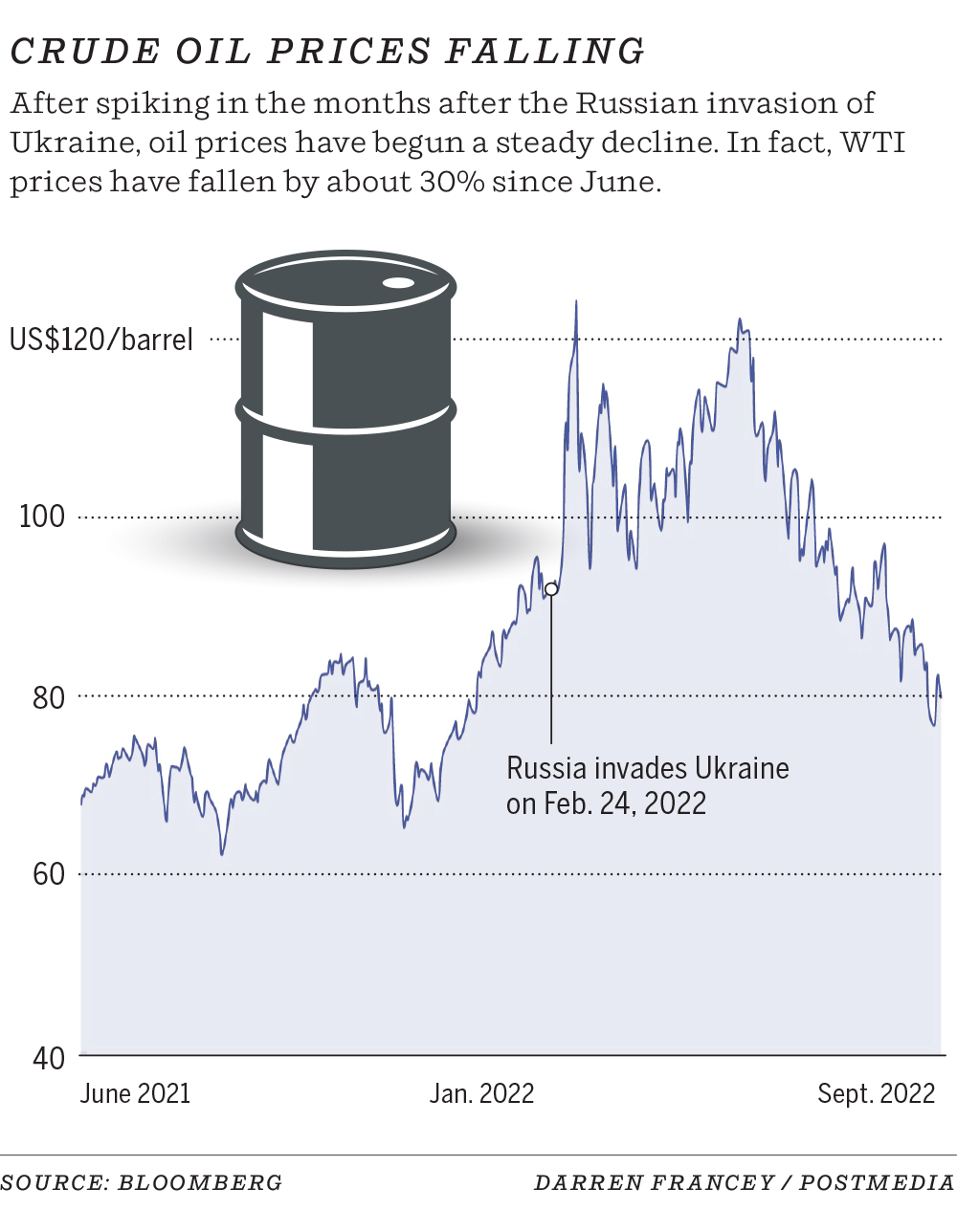 On Friday, executives with Birchcliff Energy gathered in Lake Louise for a planning session, including the preparation of its 2023 activities.

“We have more computer runs of different scenarios than you can shake a fist at. You just have so many variables,” Birchcliff CEO Jeff Tonken said in an interview.

Analysts say volatility is the order of the day — and for the coming year — given the pressures from rising inflation, labour constraints, uncertain geopolitical forces and fears of a global recession.

Overall industry spending has climbed in 2022 with strong commodity prices, although it’s still well off 2014 levels when crude prices previously topped $100 a barrel and major oilsands projects charged ahead.

During the second quarter of the year, industry capital spending on extraction hit $9.3 billion, its highest point since 2018, according to Statistics Canada.

The province estimates oil and gas investment in Alberta this year will increase almost 35 per cent from 2021 levels.

“Our (provincial) budget is based on $70-a-barrel oil and our industry is profitable at even prices much lower,” Savage said in an interview.

“I don’t expect the oil price to remain under 80 bucks. I’m pretty sure it’s going to (move) up and I’m not worried about the capital spend, either. The industry is pretty optimistic.”

Precision Drilling Corp. CEO Kevin Neveu pointed out the Calgary-based company had 67 rigs working in Canada this week. That’s just off the peak of 72 rigs active last winter, typically the busiest season for the sector.

He anticipates strong drilling activity will occur in the Montney formation and Clearwater heavy oil play next year. While oil prices are down, customers have “headroom to work with” as they’ve underspent their cash flow levels.

“We’re expecting to see drilling and services demand picking up into 2023. I’d say it’s kind of a minimum five per cent, maybe as much as 10 per cent,” Neveu added.

While spending in the sector is projected to increase, part of that is being driven by inflation. Even if companies wanted to invest significantly more money, they are facing bottlenecks due to labour and equipment constraints.

“We are not expecting a step-change in activity,” said oilfield services analyst Tim Monachello of ATB Capital Markets. “It’s just a sort of modest growth.”

And there’s a positive force assisting the sector this fall — the rapidly declining Canadian dollar. The loonie fell to a two-year low earlier this week and dipped to 72.96 cents US on Thursday.

Even with oil prices declining, WTI crude prices are sitting near $110 a barrel in Canadian dollars, while Western Canadian Select heavy oil remains around $80, a report by Eight Capital said Friday.

“In Canadian dollars, oil prices are almost 40 per cent higher than what you would see in U.S. dollars, so it’s quite significant,” said Eight Capital analyst Phil Skolnick.

At Birchcliff, Tonken noted the company sells 87 per cent of its natural gas in U.S. dollars. He also anticipates natural gas prices will remain healthy next year.

As well, the company expects to be debt-free later this year, reducing some of the risks from unpredictable commodity markets and currency rates.

Tonken expects spending across the Canadian sector will be “measured and balanced” in 2023.

“I don’t think you’re going see a ton of growth. You will see some growth from some companies,” he added.

“We are full of optimism … but we don’t see giant drilling programs that are going to increase production materially.”