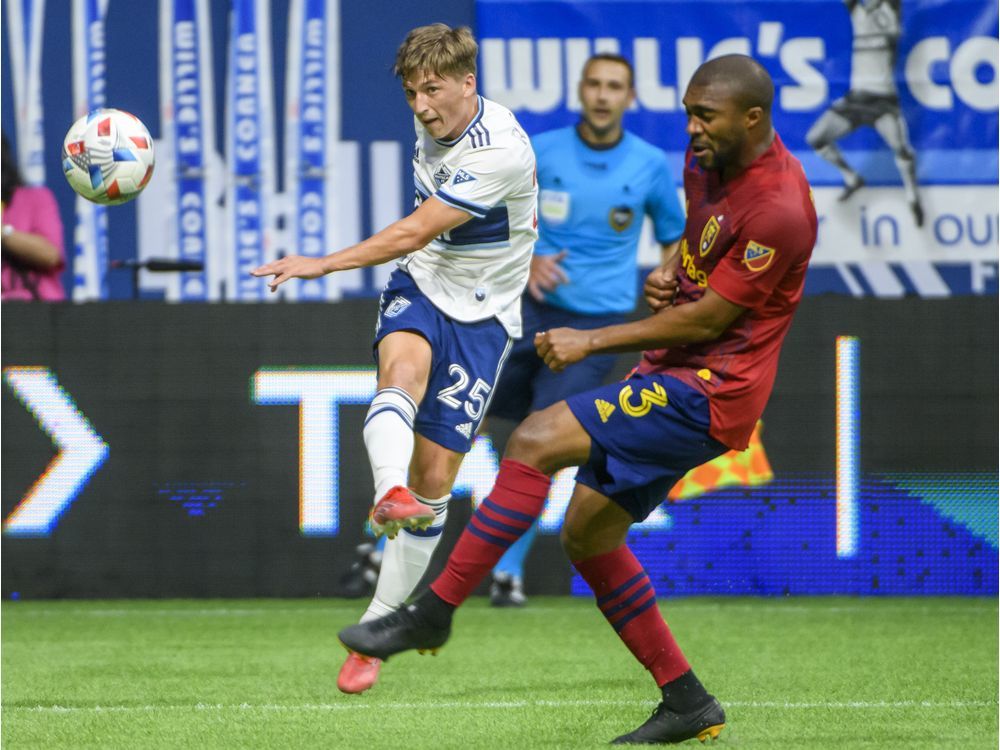 For long stretches this season, the Vancouver Whitecaps have been without:

• Their other best defender.

And with those gaping absences, it’s not surprising the Caps have been at or near the bottom of Major League Soccer’s Western Conference for most of the season. Their win over Sporting Kansas City dropped KC into 14th and bumped the Caps up to 12th in the West. They’re just a single point ahead of bottom-feeding Sporting, but also just four points out of a playoff berth.

The question was posed to head coach Vanni Sartini on Wednesday: Would the Caps be higher in the standings if the players mentioned off the top — Gauld, Brian White, Erik Godoy, Tristan Blackmon and Hasal— had been healthy?

“I don’t know,” he said. “In Italy, we say ‘if my grandmother had wheels, she would have been a bike.’ So we don’t know.

“We have never been … all fit to go. That’s true, but it’s also something that most of coaches dream a lot of … to have everyone ready. It rarely happens.

Vancouver took just one win and four points from its first four games, but has reversed its fortunes recently with a 2-0-1 run at B.C. Place Stadium to start the month and winning last weekend in Kansas City. The only blemish in the month of May was a 2-1 loss at Charlotte FC, a game in which they were tied until the 85th minute.

Three of the Caps’ four wins this season were by 1-0 scores, the other a 2-1 game. Sartini knows they’ll need to put forth the same kind of organized and compact defensive performances should they want to get a positive result on Saturday against RSL. The Claret and Cobalt come into the game having won three in a row and outscoring opponents 7-2 over that stretch.

“If we keep doing that, the chances of winning are very high because in every game, we’re always building at least three, four or five chances. So if we limit the chances for the opposition, the the possibility for us to win is really high,” said Sartini. “We’ve been much more intelligent lately in our choices in adapting our approach to the game according to … the players that we have, because we have a very good depth of players. Not every player is the same and we need to adapt a little the way that we play according to who’s on the field every week.”

Last week, that was inserting centre-back Florian Jungwirth into his favourite position as a defensive midfielder. This week, there will be more tweaking. White may be back from his bout with COVID-19, but he still isn’t 100 per cent.

Snake-bitten midfielder Caio Alexandre, who hasn’t played in nearly 10 months due to two separate injuries, will be available off the bench, but not for very long. Blackmon is also available for selection, but hasn’t had any game action since injuring his knee against Austin in April.

If they continue the pattern they’ve shown in bringing Godoy back to the lineup — minutes with WFC2, restricted to one game per week — both will see scant action on the weekend.

Sartini was cagey about how they’d line up against RSL, only conceding that they’d start with a three-man back line, and the rest was a surprise. But with the team’s league form and two wins in the Canadian Championship added in, he struck a confident tone when speaking with media on Wednesday.

“Everyone is really pumping up,” he said. “I think the fact we played a lot of games and actually everyone started at least once (in May), everyone was an integral part of the success the month. No one has been relegated on the sideline.

“We need to keep building, we need to keep working and keep getting results because good results feed this kind of environment and mood.”