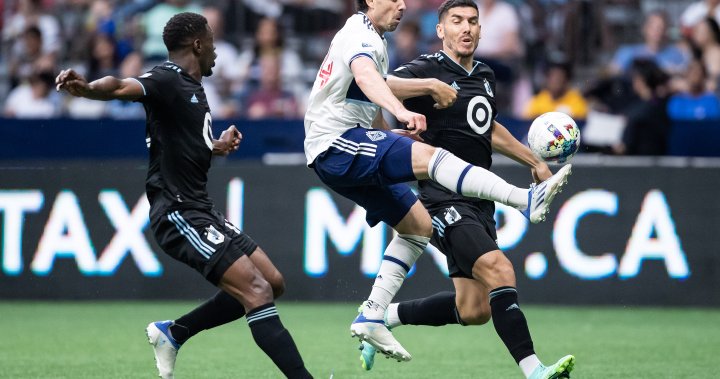 The Vancouver Whitecaps know onlookers have counted them out for weeks.

Losses to Nashville and San Jose and Colorado appeared to snuff out the club’s playoff hopes last month.

Heading into the final game of the regular season, though, the ’Caps (12-14-7) are still alive — a win on the road against Minnesota United (13-14-6) on Sunday and they clinch a post-season berth.

“We worked hard to get to this point,” said defender Jake Nerwinski. “We put ourselves in a great position, and now we get to go play free.

Making Sunday’s game count hasn’t been easy. The ’Caps not only had to win three games in a row against opponents that beat them handily earlier in the season, but had to get a lot of help on the out-of-town scoreboard, too.

“It kind of seems like the stars are aligning a little bit,” said striker Brian White. “Not to jinx it, because, obviously, it’s going to be a big test, a big challenge in Minnesota.”

Nerwinski admitted that the stretch has been “improbable.”

“It’s s almost impossible and it’s something that we need to take advantage of,” he said. “Everything went our way to get to this point. Now, hopefully, we can continue to make the most of it and make it worth it.”

Finishing the job in Minnesota won’t be easy.

While the Whitecaps need all three points from a victory to secure a post-season berth, United simply needs a draw.

The road has been a struggle for the ’Caps all season. The club’s away record is a woeful 2-10-4, with the last win coming on June 18 when Vancouver blanked Dallas FC 2-0.

Recent wins against the L.A. Galaxy, Seattle Sounders and Austin FC show, though, that the Whitecaps have what it takes to complete the task, Nerwinski said.

“We have to play the same that we’ve been playing the last three games,” he said. “We continue what we’re doing, we’re defending well, we’re attacking with speed and with purpose, we’re scoring goals. I think that’s the key.”

United already has a win over the ’Caps this season, taking a 3-1 victory at B.C. Place on July 8. The game saw Vancouver cough up a 1-0 lead late in the second half.

Playing all 90 minutes on Sunday will be crucial, said head coach Vanni Sartini.

“I think (the July 8) game, for 75 minutes we were the best team and we were up 1-0, deservedly so,” he said. “But they have very high-quality players up top and if you stop playing, if put your level of intensity and application tactically a little down, they’re going to be dangerous.

“So we need to be even better than we were in the first 75 minutes at B.C. Place.”

While Vancouver comes into Sunday’s game on a three-game win streak, Minnesota is winless (0-5-1) in its last six outings.

The ’Caps have confidence after fighting their way back into playoff conversation, White said.

“The discussions we had in the locker room were about playing for pride, playing for wins, playing for everything we can to the last moment,” he said. “And we’ve clawed our way back.

“We’ve had fortunate results go our way, so we’re in a good position now where we win and we’re in. And I think everyone’s really excited and motivated going into the weekend.”

INS AND OUTS: The Whitecaps will be without defender Cristian Gutierrez (abductor) and winger Deiber Caicedo (season-ending knee surgery). Minnesota midfielder Kervin Arriaga will miss the game due to suspension for yellow card accumulation and United forward Bongokuhle Hlongwane is out with a knee injury.

HISTORY BOOKS: Minnesota holds a 4-3-3 all-time edge over Vancouver in MLS play. While United is unbeaten (2-0-2) in four home matches against Vancouver, neither side has defeated the other twice in a single season.

GOLDEN GAULD: Ryan Gauld has been clutch for the ‘Caps offence recently. The 26-year-old Scottish attacking midfielder has factored into seven of the club’s last 11 goals, scoring four and assisting on three others.