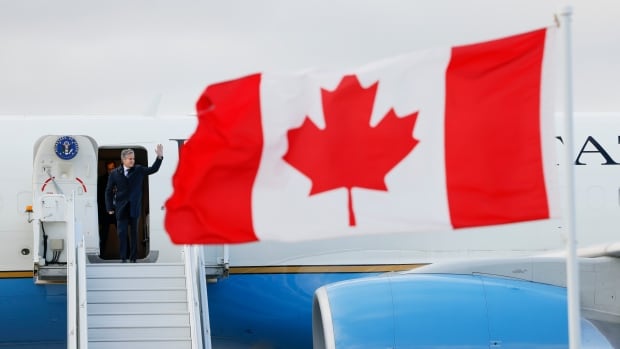 U.S. Secretary of State Antony Blinken is in Canada today to meet with senior officials about the deteriorating situation in Haiti — a country that is in a state of anarchy as it grapples with marauding gangs, food and fuel shortages, and a resurgence of cholera.

The poorest country in the Americas has been effectively leaderless for more than 15 months after the last president, Jovenel Moïse, was assassinated.

Criminal gangs have seized control of some parts of the country, which has further exacerbated the already-acute situation in a country that has faced a series of crises over the last decade.

Haiti’s current crop of leaders have called for foreign intervention to restore a semblance of stability.

Ariel has also been pleading for assistance so the country can reopen airports and ports to normalize the flow of goods — most importantly, food.

According to the United Nations, nearly half of Haiti’s 11 million people face acute hunger, including 1.8 million at risk of a food emergency. In Cité Soleil, a sprawling slum in the capital of Port-au-Prince, some 19,000 people face a food “catastrophe,” the UN said.

The U.S. has been trying to cobble together some sort of international stabilization force — which could include police officers and military personnel — to help restore order. It wants Canada to play a role.

The goal is to have something in place by November to bring some much-needed relief to a country paralyzed by hunger and crime.

The Miami Herald has reported that the U.S. is struggling to get a military force deployed amid widespread reluctance from potential contributing countries. Canada is among those reluctant countries, the newspaper said, but it is still seen as the most likely to lead a rapid deployment.

Bloomberg and the Herald both report that the U.S. is also reluctant about a troop deployment.

In a background briefing with reporters on Wednesday ahead of Blinken’s visit, an official with the U.S. State Department said the Americans are “very optimistic that the international community and the [UN] Security Council will come together around another resolution that will create a multinational force for Haiti.”

“I think the composition of that effort will be something we discuss, given that Haiti is a priority for both countries,” the official said of Blinken’s talks with Canadian officials.

“Canada is an incredibly capable partner across a whole host of areas,” the official said, pointing to Canada’s past experience in humanitarian missions and foreign development. “Those are important skills.”

“The country that will be the lead in that effort has not been determined. I don’t want to give the impression that that is a predetermined decision. But I do believe that there are a number of countries that have the skills to do that — and among those countries is Canada. But it’s not the only country that can do that,” the official said.

To that end, Foreign Affairs Minister Mélanie Joly said Thursday that Canada will be “conducting an assessment mission” in Haiti in the coming weeks.

According to Global Affairs Canada, a Canadian government delegation will be carrying out consultations with regional partners, the United Nations, the Caribbean Community — the intergovernmental group of 15 countries from the region — and other partners to find a way to resolve the humanitarian and security crisis, and how Canada can contribute to the international response.

“Canada and the international community are concerned about the violence in Haiti, in particular against women and girls. Canada will not remain idle while gangs and those who support them terrorize Haiti’s citizens, and we will continue to support law-abiding Haitians to put an end to the crisis in their country,” Joly said in a statement.

Earlier this month, a Canadian military plane delivered armoured and tactical vehicles from Canada to Port-au-Prince, in support of Haitian police locked in a conflict with armed gangs.

Like that September meeting, the country’s top diplomats are also expected to discuss the situation in Iran — where activists are demanding an end to the oppressive regime — the West’s posture in the Indo-Pacific region after Chinese President Xi Jinping recently consolidated power, and how best to deal with an increasingly erratic Russian President Vladimir Putin.

On Friday, Blinken will travel to Montreal with Joly and visit a lithium-recycling facility, among other possible stops. Lithium is one of the key components in electric-vehicle batteries. Canada has emerged as a key supplier of this and other critical minerals at a time when automakers are ramping up production of electric cars and trucks.