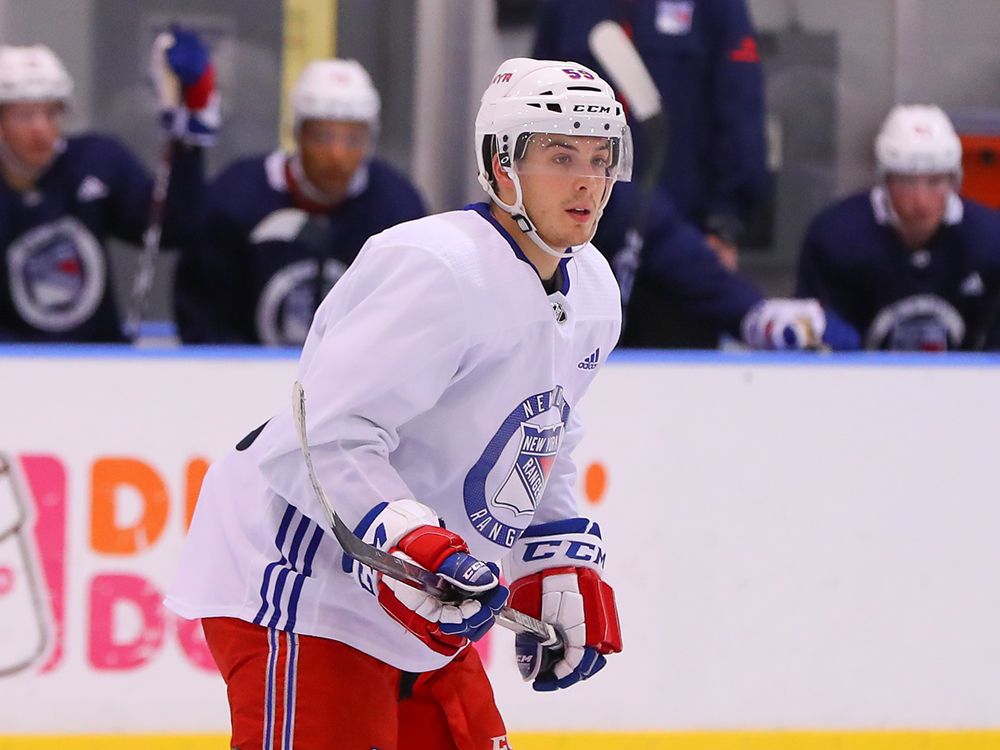 Ty Ronning and Vancouver Canucks seemed like a fit in the late going of the 2016 NHL Draft.

The Canucks had two picks in the seventh round. Ronning, a 31-goal man that Western Hockey League season with the Vancouver Giants and the son of longtime Canucks fan favourite Cliff Ronning, was there for the taking.

The Canucks instead opted for Portland Winterhawks centre Rodrigo Abols at No. 184 and North Bay Battalion forward Brett McKenzie at No. 194. The New York Rangers took Ronning, a winger, at No. 201.

Abols and McKenzie never caught on with the Canucks. Ronning scored a team-record 61 goals with the Giants in 2017-18 and signed on with the Rangers.

Fast forward to 2022 and Ronning, now 24, became a free agent on Monday when the Rangers opted not to tender him a qualifying offer after four seasons in their farm system.

Ronning is saying all the right things. He’s intrigued by the idea of being a part of the Canucks organization. He would love to help be a part of building something with the AHL’s Abbotsford Canucks. He also knows that he needs to be open minded and check out opportunities.

We will get an idea of what the Canucks think of Ronning soon enough, with the free agency opening on Wednesday at 9 a.m. PDT.

“I know the fan base here. What a fan base it is and it would be pretty cool to play here in my hometown,” said Ronning, who grew up largely in Burnaby. “I’ve been speaking with some KHL and European teams as well. As of right now, I’m just trying to weigh out my options.

“This is my first time being a free agent. I’m trying to understand the whole process of it and enjoy it at the same time.

“In the end, I have to do what’s best for me. Signing with the hometown team would obviously be nice. I’ll speak with my agent and see what’s the best fit.”

He’s on the small side, at 5-foot-9 and 185 pounds, but he’s shown an ability to score and to be tenacious on the forecheck. He’s also someone with a story that resonates in these parts and is familiar with the area and the brand.

“I’ve learned a lot. I’ve been through a lot,” said Ronning. “It’s a roller-coaster sport. I feel like I’m more mature and I’ve grown as a player and a person.”

Ronning is skating once again this summer at Planet Ice Delta with a group that regularly includes NHLers Brendan Gallagher, Ty Smith, Troy Stecher and Kyle Burroughs. He’s still very much aiming at sticking in the NHL one day.

“I’m my dream,” he said. “I want to play at the highest level overall.

“Skating with these guys in the summer and seeing the work ethic drives you. I understand what the (NHL) level is and it’s a matter of getting that opportunity. And I know that opportunity will need to be earned.”

Ronning maintains that he’s “completely different,” than the one that graduated from the Giants and WHL after that record-setting season.

“I’m a pro now. It’s maturity,” he said. “I remember watching my father and everything he did to get ready for games and take care of his body. Now I understand the why.”

Asked it he was surprised about the Rangers cutting ties with him, Ronning says simply that “It’s a business.”

“I know I had a good season,” he continued. “I put in my work every day on ice and off ice and set out to be as professional as I could.”