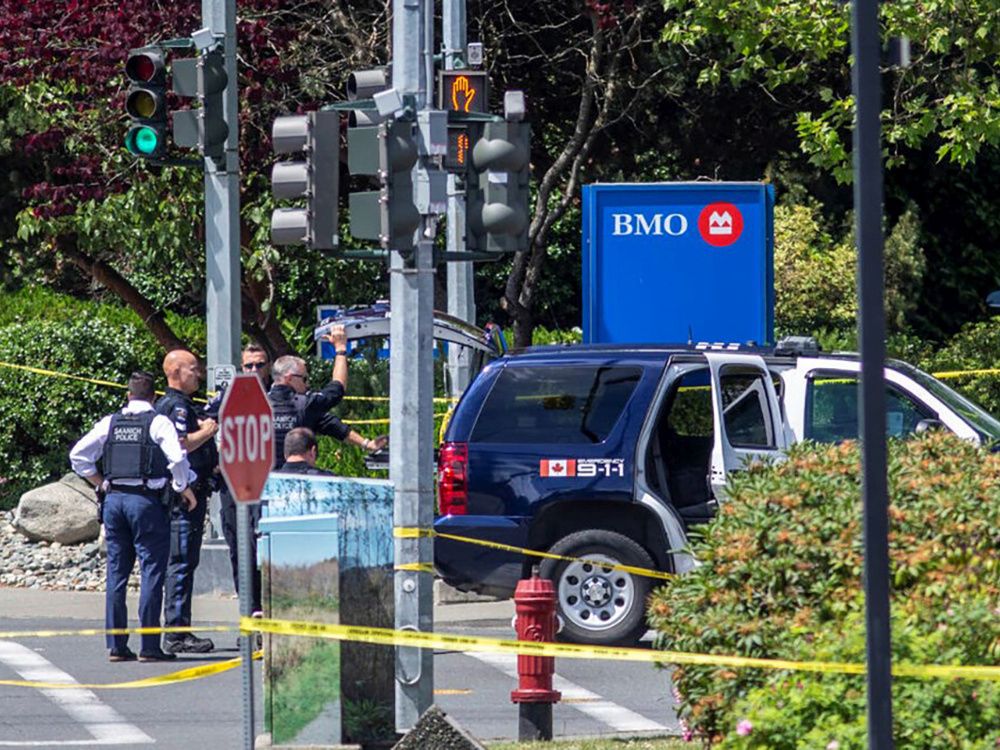 Police in Saanich kept an area near a bank evacuated overnight as they continue to investigate a possible explosive device linked to a deadly gunfight with two suspected bank robbers.

Both suspects were shot and killed as police responded to the robbery and six officers were wounded.

Duthie said the Greater Victoria Emergency Response Team was not far from the Bank of Montreal when the armed robbery call came in and were on scene in time to confront the suspects.

Social media videos show dozens of shots were fired and police have set up an online site to gather videos taken by witnesses.

The incident, described as “chaotic, tragic and violent” by Duthie, began about 11 a.m. when officers responded to a report that two heavily armed men had entered the bank in the 3600-block of Shelbourne Street, just south of Cedar Hill Cross Road.

Numerous officers from Saanich, Victoria and the GVERT responded and encountered two suspects who fired at police. Police returned fire and both suspects died at the scene.

Three Saanich officers and three Victoria officers, all members of GVERT, were wounded. Three officers were expected to be released after treatment, said Duthie. The other three sustained much more serious injuries and were taken into surgery.

“This is a very difficult day for us here at the Saanich Police Department, for the Victoria Police Department and for the whole community of Saanich,” Duthie said at a late afternoon press conference Tuesday. “We are keeping their families updated and we are doing everything we can to support them, as well as supporting all of our staff.”

Acting Victoria Police Chief Colin Watson said the officers put their lives on the line and the department has been significantly impacted.

“There’s a sense of sadness and frustration about what’s happened, but also a sense of resolve about doing the best job they possibly can under very difficult circumstances,” said Watson. “This is the type of event we hope we never see. But this is also why we provide training and prepare our officers for the very worst day — and this is one of those days.”

Both police chiefs emphasized that officers would continue to respond to calls for help.

It’s amazing no citizens were injured, said Duthie. GVERT was deployed and close by and their quick response was invaluable, he said.

Police did not say why GVERT were already deployed or whether they had received information in advance about the bank robbery.

Homes and businesses near the bank were evacuated when police discovered a “potential explosive device” in a vehicle. The B.C. RCMP explosives disposal unit was called in to deal with the device but has since left the scene.

Police received “vague information” about a third suspect and searched the area with police dogs and a helicopter, but a shelter-in-place order for nearby residents was lifted at 6 p.m. after officers found no further evidence of another suspect.

Police had no information on the men who were shot and killed, said Duthie.

A man with dark hair, wearing motorcycle boots, body armour, hockey pants and a military jacket with a Canadian flag on the shoulder, was seen lying motionless in the parking lot outside the bank. His body was surrounded by what appeared to be discarded tactical police gear.

Just after 12:30 p.m., about 25 people who had been in the bank during the robbery were escorted by armed officers to a waiting bus. Some were crying. The witnesses were taken to police departments for care and to give statements.

Charlotte Priest, an assistant at Lifeline Animal Clinic across Shelbourne Street from the bank, said a few of the clinic’s clients heard the shooting and took shelter in the building. “That’s when we realized there’s something going on. So we just closed our blinds and just took cover and are staying away from the windows.”

A passerby also took shelter in the waiting area, said Priest, noting a police van was parked at the clinic’s driveway.

“There’s a lot of businesses in the area. It is kind of shocking for it to happen here.

“Everybody is a little bit shaken up.”

Saanich Mayor Fred Haynes posted on Twitter: “Our hearts go out to our officers, bank staff and residents. … No words can describe how horrendous this is.”

At nearby St. Michael’s University School, a woman said the school was in “hold and secure” mode, with all external doors locked and everyone inside.

Jacqueline Niemann, who was managing the office on Tuesday, said she heard noises but did not immediately recognize the sound as gunfire. Police cars arriving at the scene alerted their office to the situation.

Everyone is safe, she said. “It is pretty scary.”

Hannah Young, a pharmacy assistant at Heart Pharmacy in Shelbourne Plaza, across the street from the bank, said she heard “what was definitely gunfire.” “And it kept going. I looked out and I could see people ducking by their cars in the parking lot.”

Young said she wasn’t afraid but was concerned for the safety of people in the area.

“Do we need to close the door? Pull the customers inside? Shut down? It was more of a fight or flight response,” said Young. “We saw they were elderly people sitting outside and we told them they needed to come inside.” They brought everyone inside away from the windows into the back half of the pharmacy.

Jeff Roman, BMO bank spokesman, said in a statement that the company is “deeply saddened” by the incident. “The safety and security of our customers and employees is our priority and our thoughts are with every person impacted by today’s events.”

Roman thanked emergency responders for their fast assistance and for helping to keep the public safe.

Saanich police are leading the investigation, with assistance from the RCMP and an emergency response team from the Lower Mainland, among others.

An Island Health official said health-care teams at Royal Jubilee and Victoria General hospitals stepped up to respond to the incident. The Jubilee’s emergency department was briefly under restricted access to ensure safety, but neither hospital was under a code orange, which refers to mass casualties, the official said.

“In situations like this, we quickly redeploy staff as necessary and implement contingency plans to ensure our hospitals and staff are best positioned to respond,” Island Health said.

As with all officer-involved shootings in British Columbia, the Independent Investigations Office is investigating.

— With files from The Canadian Press