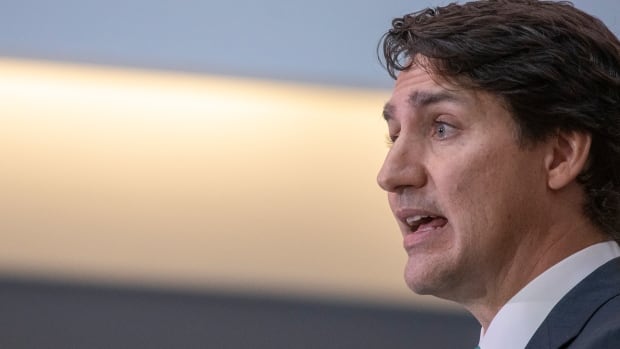 Prime Minister Justin Trudeau is defending his government’s decision to return turbines used in a pipeline to carry natural gas from Russia to Germany.

The turbines — which had been sent to Montreal for scheduled repairs — were caught up in the economic sanctions Canada imposed on Russia following its invasion of Ukraine.

The federal government said Saturday that it will grant “a time-limited and revocable permit” to Siemens Canada to allow for the return of the turbines used for Nord Stream 1, a set of natural gas pipelines connecting Germany and Russia.

Prime Minister Justin Trudeau says the decision to return the turbines does not affect Canada’s support for Ukraine.

Speaking at a press conference in Kingston, Ont. on Wednesday, Trudeau said the decision to return the turbines was “difficult” but necessary, given the need to support Germany and other European allies in the face of threatened natural gas shortages.

“We have seen Russia consistently trying to weaponize energy as a way of creating division amongst the allies,” he said.

European countries have vowed to move away from Russian energy sources but the transition will take time. Trudeau said returning the turbines will help shore up European energy supplies as they make the transition.

“We took this difficult decision to be there for our allies, to ensure that in Europe, not just governments but populations stay steadfast and generous in their support of Ukraine,” he said.

Ukrainian President Volodymyr Zelensky blasted the Trudeau government earlier this week, calling its decision to return the turbines “absolutely unacceptable” and warning that Moscow will see it as a sign of weakness.

“If a terrorist state can squeeze out such an exception to sanctions, what exceptions will it want tomorrow or the day after tomorrow? This question is very dangerous,” Zelensky said in his nightly address on Monday.

CBC requested a statement from the Ukrainian embassy in Ottawa but was referred back to statements issued by the government in Kyiv.

Trudeau said his government is continuing to pressure Russia through other measures.

On the day the decision to return the turbines was announced, the federal government unveiled a new round of sanctions on Russian agents and organizations, with a focus on Russian disinformation efforts and industrial manufacturing.

“The sanctions that Canada is leading on, that we continue to push harder and harder, are aimed at [Russian President Vladimir] Putin and his enablers and aren’t designed to harm our allies and their populations,” Trudeau said.

The Ukrainian World Congress says it and the Ukrainian Canadian Congress have been urging the federal government to reconsider its decision to return the turbines.

In a media statement, the Ukrainian World Congress says it filed a notice of application for a judicial review of the decision with the Federal Court.

“Russia seeks to undermine the Canadian and global sanctions and is using the turbine issue to blackmail Canada and Europe,” the application reads.