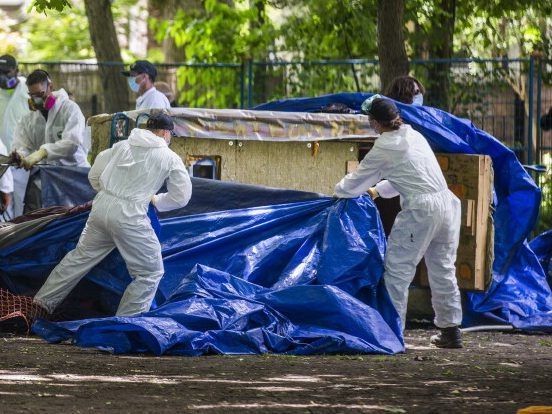 The ombud recommends that consultations be held with the public including people with lived experience in encampments.

The City of Toronto needs to take immediate steps to ensure it’s treating people with fairness and dignity when clearing homeless encampments from parks and other public property, ombudsman Kwame Addo says.

Addo has been looking into how the city removes encampments — an on-going undertaking — and Thursday released early recommendations including the need for a transparent and consistent protocol and more resources.

“Clearing encampments is extremely disruptive and in some cases traumatizing to the people living in them,” Addo said in a statement. “Given how important this issue is, and the fact that the city is continuing to clear encampments, we are releasing an interim report with early recommendations that we believe the city must act on immediately.”

Toronto has an outdated encampment protocol and no plan to consult with the community on this issue, the report says.

The report recommends that consultations be held with the public including people with lived experience in encampments.

The Encampment Office, which has been handling the clearing of parks, is under-resourced and lacks a clear mandate, the ombudsman also notes.

“I believe the recommendations in this interim report will improve the fairness and accountability of the city’s actions and will have a positive impact on those living in encampments today,” Addo said. “There is more work to do, though. We will release our final report with further recommendations at the earliest opportunity, understanding that this is an important issue for all Torontonians, but especially for those living in encampments.”

The report can be found at ombudsmantoronto.ca.