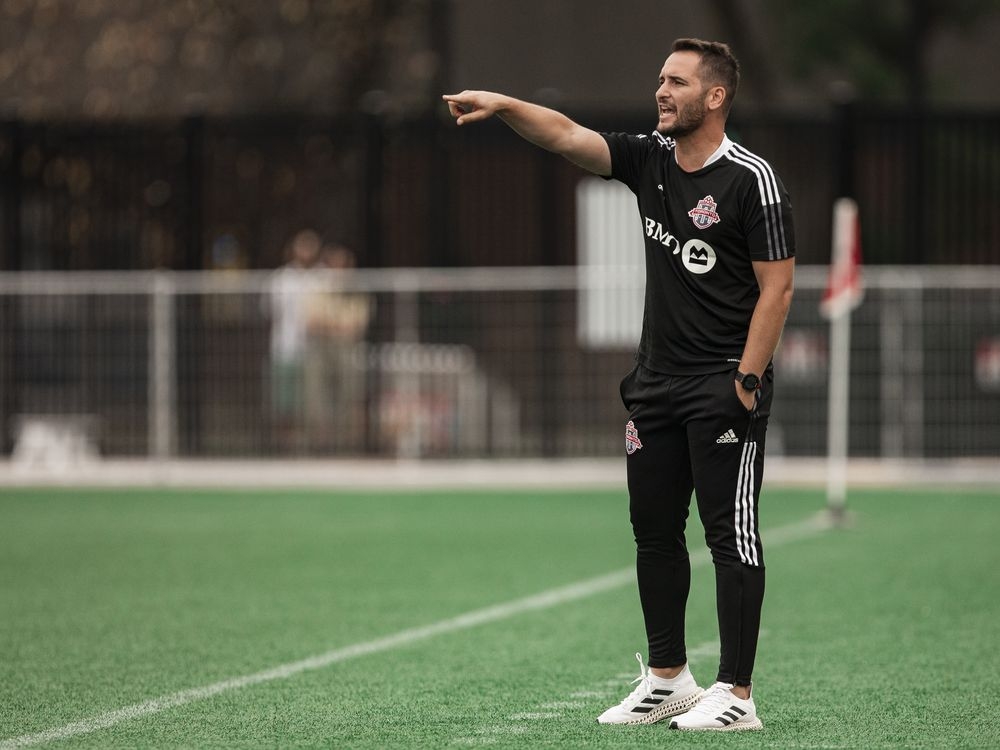 TORONTO — While Toronto FC is out of playoff contention with two games remaining in the MLS season, TFC II is embarking on its first-ever foray into the post-season.

The young Reds host the Philadelphia Union II at BMO Field on Saturday in the MLS Next Pro Eastern Conference semifinal.

“We’re happy where we’re at,” said head coach Gianni Cimini. “We believe we’re a team that can go all the way.”

TFC II (12-9-3) finished atop the Northeast Division and in second place in the Eastern Conference, one point ahead of Philadelphia (11-9-4). It’s the inaugural season of MLS Next Pro, which features 21 teams — 20 MLS reserve sides and the independent Rochester New York FC.

Whitecaps FC 2 (7-9-8) finished out of the playoffs, in seventh spot in the Western Conference. Montreal does not have an entry in the league.

Since its formation in 2015, playing in the USL and USL League One, the TFC second team had never reached the post-season.

It came down to the wire this year with Toronto securing its place in playoffs with a 2-1 victory at Orlando City B on the final day of the regular season Sept. 18. Toronto had lost 4-3 to Inter Miami II and 1-0 to RNY FC before that.

Toronto would have advanced to the playoffs with a tie in Orlando. The late winner assured them of a home playoff date.

“It should give us a little bit of an edge here going onto the (playoff) game because it was difficult,” Cimini said of the fight to get into the post-season. “Especially after losing two games, to come back and get that result.

“So we hope we can carry that forward into this playoff game.”

Of the 20 players that dressed for TFC II in the regular-season finale in Orlando, six players made appearances for the first team this season — Kobe Franklin, Steffen Yeates, Themi Antonoglou, Paul Rothrock, Jordan Perruzza and Kadin Chung.

Adam Pearlman was signed to short-term deals with the first team but remained on the bench for TFC matches against the Philadelphia Union (April 16) and Orlando City (May 14).

Fourteen different players have scored for Cimini, with Rothrock leading with seven goals while Hugo Mbongue, recently signed to a TFC homegrown contract, and Reshaun Walkes have six each and Julian Altobelli has five.

Walkes turned it up as the season wore on, making an impact off the bench.

“Every match he plays in, it looks like he’s playing his last match ever,” Cimini said of Walkes, taken in the third round (59th overall) of the 2022 MLS SuperDraft. “That’s how much effort he gives. And that’s why he gets the results that he does on the field.”

Toronto beat Philadelphia twice during the regular season, 1-0 at home June 11 and 2-1 July 18 in Philadelphia.

Last season, Toronto (10-10-8) just missed out on the USL League One playoffs, after FC Tucson (11-10-7) defeated the visiting Richmond Kickers 4-2 to drop Toronto into seventh place, just below the playoff line. It was a disappointing end to a marathon season for TFC II, which started play in Arizona due to the pandemic, before shifting to Florida and then returning home.

St. Louis City 2, the Tacoma Defiance, Houston Dynamo 2 and North Texas SC are battling it out in the West.

The inaugural MLS Next Pro Cup is set for Oct. 8.

Russell-Rowe, a former member of the TFC academy, won the MLS Next Pro Golden Boot Award by scoring 21 goals in 19 games.

TFC II’s Luka Gavran was a finalist for goalkeeper of the year, won by Patrick Schulte of Columbus Crew II.

This report by The Canadian Press was first published Sept. 23, 2022.