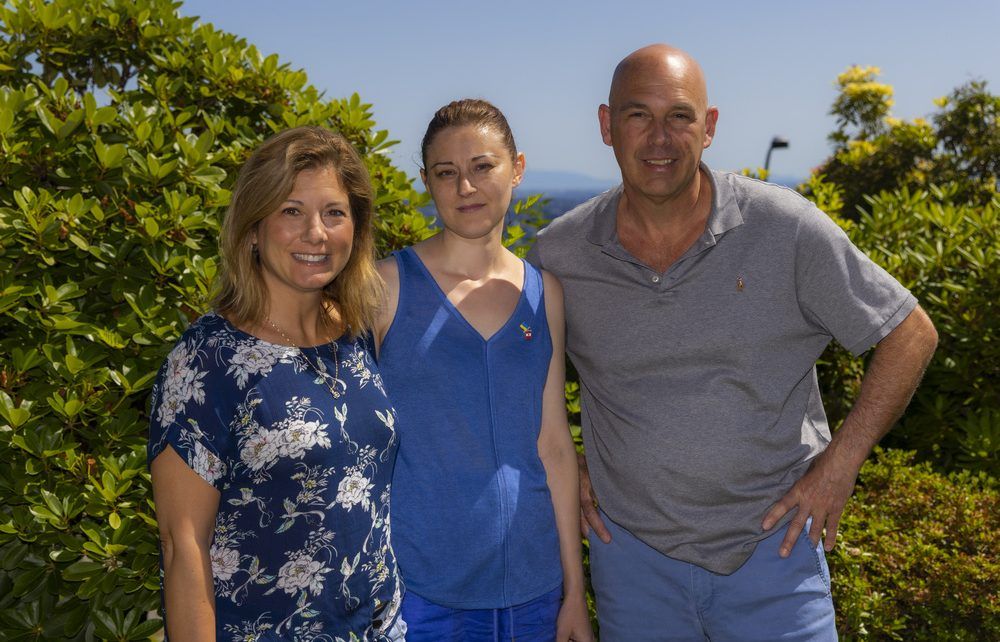 Tetiana Hrabovska’s new living quarters on the edge of a forest in the British Properties where she takes regular walks couldn’t be further away literally and figuratively from the home she left in war-torn eastern Ukraine.

“I left Kharkiv because it was being constantly bombed and shot, and every 15 minutes we would wonder if our place was going to be bombed or not,” said Hrabovska, 41, one of the estimated 4,000 Ukrainians who have arrived in B.C. since Russian started bombing Ukraine on Feb. 24.

“We would sit in the bathroom because it was the only safe place, waiting for the next bomb or the next shot that came in,” she said in a Zoom interview during which she spoke Russian through an interpreter.

Like many of the 20 to 30 Ukrainians who continue to arrive in B.C. each day, finding a place to stay is the biggest challenge.

After leaving behind her mother and brother on March 5 and travelling two and a half months via Berlin to to Vancouver, Hrabovska stayed in the Ramada hotel for about a month, as many arrivals do before finding a place to stay.

Settlement agencies, such as those run by the Ukrainian Canadian Congress, Mosaic and SUCCESS, are desperately trying to find enough rooms, suites or apartments, temporary or permanent, for the thousands who have arrived and those expected in the coming months.

“We are still in a very big shortage,” said Iryna Shyroka of the UCC.

She said the UCC is triaging requests to put mothers with children, the elderly and people with disabilities at the top of the list.

Women have been allowed to leave Ukraine, many of them leaving husbands, brothers and uncles between the ages of 18 and 65 behind to help fight the war.

The United Way, which has been supporting the settlement agencies to find accommodations for the arrivals, is urging British Columbians to open up their homes if possible to temporarily house the arrivals.

“We are supporting those that are providing direct client settlement and we support all of them,” said Alzbeta Sabova, food security initiative manager for the United Way.

The charity is holding an information session for any locals who have space in their homes but unsure how to connect with the Ukrainian arrivals. It is on Monday, at 6 p.m. via Zoom and registration is online or by email.

Fred Vertone is a homeowner who offered Hrabovska a suite in which he installed a fridge, microwave and hot plate.

“It’s not a perfect kitchen, but it’s got everything she needs,” he said.

Vertone said he and his wife support the notion of helping those in need but had never done anything like this before.

“I was just feeling guilty that we’re not doing anything because have some extra room.”

He said his two children, 15 and 20, balked at first, but have accepted the new addition to their home. And he hopes he and his wife have shown them the importance of helping others.

Hrabovska, who found full-time work as a seamstress and buses to her job in Gastown, is hardly ever at home, he said.

“I thought we should be doing more with her — she’s pretty independent,” Vertone said.

Vertone said his sisters have been inspired to follow his lead and open up their homes, too. Vertone said he’s considering converting some guest suites in rental buildings he manages to provide accommodation for other arrivals.

Hrabovska is grateful for the place to stay until she can find her own place.

“I am really happy in this place. It is next to the forest and I regularly go for walks in there and I like it a lot,” she said through the interpreter. “And not only did they (the Vertones) help me with housing and clothing, they also supported me a lot psychologically and that helped me a lot when I came.”

That is in addition to a one-time payment of $3,000 for each adult over 18 and $1,500 for each child for those arriving in Canada through the Canada-Ukraine Authorization for Emergency Travel program.

The United Way, Canadian Red Cross and the UCC are among the charities raising money for Ukrainians in B.C. and abroad. Volunteers who speak Ukrainian are urgently needed and there is information on how to volunteer your time and skills, as well as information at the Welcoming Ukraine website.