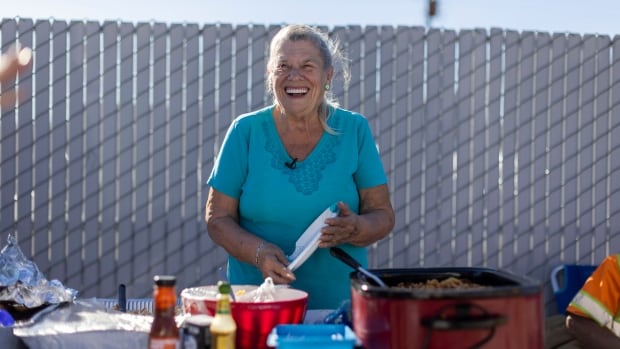 As It Happens6:40This woman was arrested for feeding homeless people. But she says it won’t stop her

Norma Thornton says she learned from a young age that it was important to help others when you can.

“If you have plenty, you share. If you can make one person’s life better for only a minute each day, you have accomplished a miracle. And that’s the way my grandma taught me,” Thornton, 78, told As It Happens host Nil Köksal.

But that lesson didn’t prepare her for what happened on March 8 at the Community Park in Bullhead City, Ariz.

Thornton was giving out home-cooked meals to the homeless, or whoever needed it, just like she had done many times. Then she saw a police car pull up.

She says it wasn’t that unusual to see a police car in the park. She didn’t even think it was odd when a police officer approached her.

The shock came when he told her she was under arrest for violating the city’s Food Sharing Event ordinance against handing out food in the park to strangers.

“At first I just thought it was kind of a prank,” said Thornton.

The officer, who Thornton said was very polite, put her in the back of the police car and took her to the police station.

She was fingerprinted, charged with a misdemeanor and given an order to appear in court at a later date, then brought back to her vehicle in the park.

“That was, I guess you’d say devastating,” said Thornton. “To be charged like a criminal … it’s still when I think about it, it’s pretty upsetting.”

Thornton pleaded not guilty. The city eventually dropped the charges, which carried a maximum fine of $750 US and four months’ imprisonment, according to the lawsuit.

She plans to sue Bullhead City and is accusing them of violating her human rights, with the help of a nonprofit law firm called the Institute for Justice. She wants the ordinance declared unconstitutional.

Thornton started giving out meals in the park when a friend from her church asked her to lend a hand. Thornton used to work in the restaurant industry, and was happy to help.

“I’ve been doing food for people in need for many, many years,” said Thornton. “Everywhere I live, any time, I share with anyone that needs.”

Thornton says she wouldn’t feed them anybody food that she wouldn’t serve her own children. Some recent meals have included turkey with stuffing and green beans, and chili dogs with dried beans.

As It Happens requested a comment from Bullhead City Mayor Tom Brady.

In an emailed response, a public information officer for the city asserted that the ordinance is lawful, and that the city is aware of the pending lawsuit and is represent.

“Bullhead City wants the public to fully understand its commitment to the homeless, including feeding of the homeless at the City’s new homeless shelter,” the city said in a press release.

That makes my heart feel good to see somebody happy, even if it’s only for a few moments.– Norma Thornton

According to the statement, the city adopted the ordinance after years of complaints from families who wanted to use the city parks. It also said people can distribute sealed, prepackaged food.

It added that the ordinance doesn’t apply to private groups or family gatherings that do not offer food to the public.

But Thornton says giving away prepacked food isn’t an option. She says she gets a small social security check, and wouldn’t be able to buy prepackaged food — even for herself.

“The way that I understand the ordinance … I would have to pay $250 to get a permit, and that would only allow me to do that once a month,” said Thornton.

She’s been doling out her meals in a private alleyway, but she says the people who come for food have to sit in a dark, uncomfortable alley, instead of the park.

Despite that, people are still lining up.

“That makes my heart feel good to see somebody happy, even if it’s only for a few moments,” she said.

Thornton buys some of her own ingredients, and friends, neighbours, and the food bank pitch in for the rest. The other day, she recalled, one person who had stopped by for a meal even donated $5 to go to the next day’s ingredients.

She says some people have told her that by giving out meals, she’s enabling homelessness instead of fighting it. It’s something she has thought and prayed about. But she says she’s just doing her best to help them survive.

Thornton hopes that by sharing her story, more people might be inspired to help those in need in their community.

“Maybe, just maybe, one other person will come forward and give a helping hand to someone to make someone else’s life better for just a few moments,” she said.