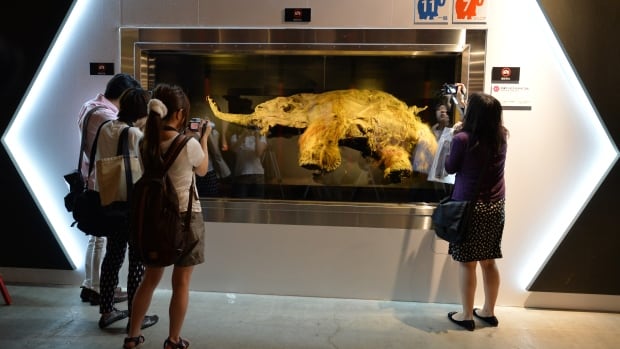 A near-perfectly preserved baby woolly mammoth in Yukon is just the tip of the iceberg, so to speak, when it comes to finding prehistoric creatures long buried in the Arctic permafrost.

But for scientists, those discoveries can feel like a double-edged sword — coming as climate change and human activities thaw and carve away the ground that’s been frozen for thousands of years.

In recent decades, many discoveries of ancient remains in North America, including that of the baby mammoth Nun cho ga, were made due to mining.

“Without the mining activities, it would be really difficult for us to study the permafrost,” said Thomas Opel, a climate researcher at the Alfred Wegener Institute in Germany, who was in the Klondike area last month to scope future research sites.

Mining carves out areas of permafrost that researchers such as Opel can study to better understand climate cycles going back 100,000 years. But if not properly maintained, those dug-up areas might be of no further use.

“Sometimes it breaks my heart a bit to see these wasted landscapes,” Opel said.

Similar prehistoric discoveries in Siberia have come as a result of crews blasting the permafrost and digging enormous tunnels to uncover mammoth tusks — many of them destined for China, where demand for mammoth ivory has soared since a 2017 ban on elephant ivory.

The tusk hunters, who are often excavating illegally, tend to discard other parts they uncover, said Love Dalén, a professor of evolutionary genomics at Stockholm University in Sweden.

“These tunneling operations tend to generate very large amounts of [ancient] bones and teeth that are simply just carried out because they’re in the way, and thrown in a big pile outside and left there,” he said. “So for us, it is valuable to be able to go there and sample [the bones and teeth] for DNA analysis.”

Dalén was part of the team that studied a pair of mummified prehistoric lion cubs found by tusk hunters in Russian permafrost four years ago. He also recently helped confirm that an 18,000-year-old puppy with fur and whiskers still intact was a wolf, not a dog.

He said the hunters’ tunnels can give geologists an opportunity to study permafrost from the inside, if they’re granted access — but they also cause great damage to the local environment.

“It basically removes the permafrost. After a couple of years, these tunnels will thaw to the extent that they collapse, and then the entire area where they have been doing tunneling will slump and then be washed into the river.”

Temperatures in the Arctic are rising much faster than the rest of the planet: Parts of Yukon and the Northwest Territories smashed heat records with temperatures above 31 C earlier this month, while a Siberian town topped 38 C in June 2020.

The heat is also causing the long-frozen ground ice to thaw, leading to erosion and slumping land that can damage buildings and infrastructure, especially around hillsides, lakes and coastal areas.

But that’s not the only cause for concern. Inside the permafrost is organic matter that, if thawed, will release billions of tonnes of carbon dioxide and methane that have been trapped in the ice for thousands of years — in turn, further accelerating climate change.

On Nunavut’s Ellesmere Island, far north of mainland Canada, paleobiologist Natalia Rybczynski is beginning to see some of those climate impacts first-hand.

In a once-forested area that beavers, bears, camels and other animals roamed three to five million years ago, when the climate was 18 C to 20 C warmer, the thawing permafrost now threatens a key fossil site known as Beaver Pond.

During a 2006 expedition, Rybczynski discovered “huge slope failures” on the hillside where the site — one of few in the Arctic containing mammal fossils — is located.

“Potentially, at some point, our whole little fossil site could just come down,” said Rybczynski, a researcher at the Canadian Museum of Nature and adjunct research professor at Carleton University in Ottawa.

“We just feel vulnerable — we feel that site is vulnerable to being lost, and it’s the only [site] that we’ve been able to find so much biodiversity, from the vertebrate perspective, so it’s one that we are a bit concerned about.”

While many scientists study the permafrost to understand the past climate and the creatures that lived in it, some others hope to save the permafrost itself.

On the edge of the Siberian tundra in Russia’s far northeast, Nikita Zimov and his father, Sergey, have dedicated the last 35 years to recreating the kind of environment where the woolly mammoth thrived until about 11,000 years ago.

Their vision is Pleistocene Park, a 14,000-hectare reserve with a fenced area slightly larger than Toronto’s Pearson International Airport, repopulated with wild grasses and about 150 animals, including bison, horses, moose, reindeer and, more recently, camels.

The animals, Nikita Zimov said, prevent the deep winter snow from acting as a literal blanket to the permafrost — lowering the ground temperature to reduce the risk of thawing and releasing greenhouse gases.

“If you have something tasty underneath the snow and you have herbivores, those animals will come to this place and they will dig through the snow looking for food, and by that, they will be trampling down the snow quite badly,” he said.

“Instead of half a metre to a metre of soft snow, which is a great heat insulator, you will have five to 10 centimetres of very compact snow cover, which loses its heat insulation ability.”

The Zimovs see a series of parks like their own as the solution to the permafrost’s problem — albeit one that would require millions of animals and many years to change the Arctic’s climate.

Time is not on their side, with a group of international climate scientists warning that close to 90 per cent of the Earth’s near-surface permafrost could be gone by 2100, if emissions continue at their current rate.

That would also force the permafrost to reveal more of the ancient life it hides — with or without the help of miners or tusk hunters.

“Sooner or later, we are going to find a human frozen in the permafrost that’s going to be 30,000 years old. And that is going to teach us a lot about the early humans, you know, what they were wearing, what they looked like,” Dalén said.

“It’s only a question of when.”