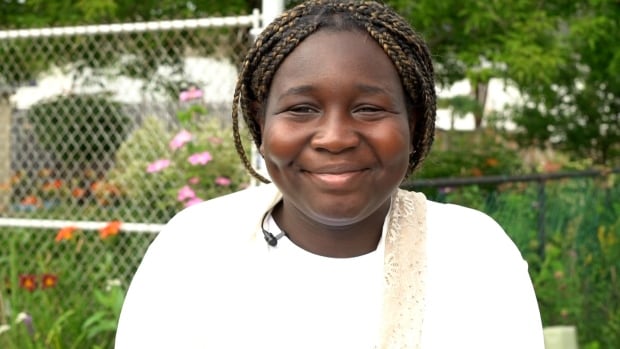 Greater Sudbury police are asking the public to refrain from taking matters into their own hands amid an investigation into an altercation at a gas station in the northern Ontario city that was captured on video.

The incident, which police are investigating as being racially biased, occurred Saturday around 10:30 p.m. ET at the Pioneer gas station on Lasalle Boulevard.

In the video, Tamba Baba, 18, steps between an angry customer who appears to be yelling at a convenience store clerk. Baba asks the customer to “be a little bit nicer” to the clerk.

The unidentified customer then turns on Baba, hurling a string of racist terms at the young Black woman.

The altercation continued into the parking lot, with the customer and Baba appearing to stand face to face before the customer leaves.

Baba, who was born in Chad and grew up in Sudbury and Montreal, said she was “shaking” even before she began recording the incident on her cellphone.

“I was really scared to say something because it could go really bad, it could go south so quickly,” Baba said. “I was shaking inside, but I knew it was the right thing to do.

“I just felt so angry that I even had to say something to begin with, because I don’t understand why everyday workers have to face rude customers like that.”

She said she’s heard horror stories from co-workers about irate customers and even dealt with a few herself, but the level of anger directed at the clerk was too much for her to witness.

“I don’t tolerate that because everyone deserves to be treated with respect,” said Baba.

Greater Sudbury police addressed the public’s concern over the incident, but urged people not to “take matters into your own hands.”

We appreciate the public’s concern regarding the incident that took place at a convenience store over the weekend; however, this is an ongoing police investigation. Do not attempt to take matters into your own hands. <a href=” <a href=”https://t.co/y0xLZRP99S”>pic.twitter.com/y0xLZRP99S</a>

Police are still attempting to identify the customer in the video.

It shows him turning his attention to Baba when she attempted to step in.

Baba said it’s just the second time in her life that she’s been referred to using that word.

“I’m really comfortable in Sudbury,” she said. “This town doesn’t make me feel like I don’t deserve to be here. Being a Black person, sometimes you can feel like that, especially when it’s a predominantly white town.

“But I’ve never felt like I was different than someone else just because I was Black,” she said. “Even at school, my friends have always included me in everything. Growing up, I never faced racism. I feel like I’ve always been treated with respect.”

In a statement, Black Lives Matter Sudbury said they didn’t believe this was an isolated incident.

“While Sudbury attempts to pride itself on being an inclusive, safe, and friendly community, the BIPOC (Black, Indigenous and people of colour) population and specifically Black community members continue to face attacks of this nature regularly and without hesitation,” the group posted on its Instagram.

The group said it was also taking issue with how police have handled the case.

“Police services were contacted, and no progress was made,” the statement reads. “We remain firm on our stance that the police do not aim to serve or protect the Black community. Even when incidents escalate to violence — and especially when incidents escalate to violence — the police do not look out for or protect Black bodies. This is not news to us, and we cannot stress enough the importance of community care and keeping each other safe.”

In a statement to CBC News, a spokesperson with Greater Sudbury police said the case has been assigned to an investigator specifically trained in hate crime and hate-bias/motivated incidents to ensure a thorough probe is done.

“The Greater Sudbury Police Service takes reports of hate-motivated crime and hate-bias incidents very seriously and we recognize the impact on and pain felt by community members when there is evidence of hatred,” the statement says.

“We want to assure you that we are committed to investigating these situations thoroughly.”