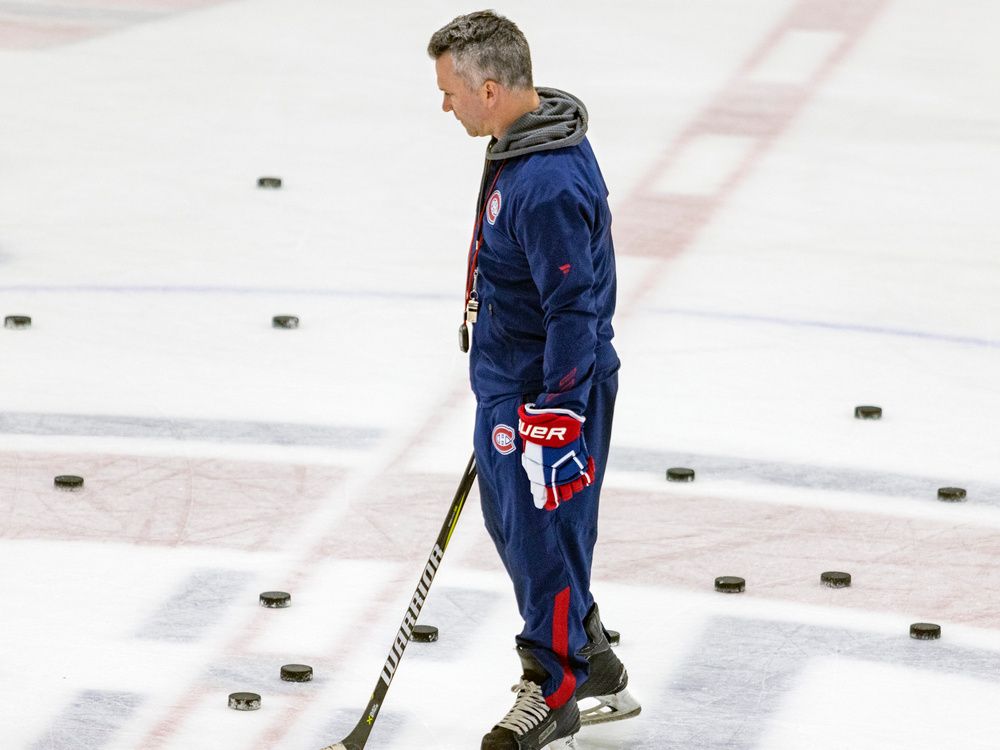 “Grow,” he said after the team’s morning skate Saturday at the J.K. Irving Centre. “Grow as a team.”

There are going to be a lot of growing pains along the way, as we already saw during the preseason as the Canadiens finished with an 0-6-2 record following Saturday night’s 3-2 overtime loss to the Ottawa Senators in a Kraft Hockeyville game.

It didn’t help that the injury bug has already hit the Canadiens again after they finished last season with an NHL record 731 man-games lost to injuries.

Forward Nick Suzuki and defenceman Joel Edmundson collided during an on-ice session a couple of days before the start of training camp, both suffering lower-body injuries. Suzuki made a brief appearance at training camp and played in one preseason game before being sidelined with an upper-body injury, while Edmundson missed the entire training camp with his back injury.

“We’ll get back home, get a day off (Sunday) and reassess,” St. Louis said after Saturday’s game when asked how the injuries will impact the 23-man roster to start the season.

The team flew home after Saturday night’s game and GM Kent Hughes is slated to speak with the media at 3 p.m. Monday about the roster.

Defencemen Kaiden Guhle and Jordan Harris both played well enough during the preseason to earn spots on the roster, while Justin Barron looks like he could use some time with the AHL’s Laval Rocket. That probably played into the Canadiens’ decision to claim defenceman Jonathan Kovacevic off waivers from the Winnipeg Jets on Saturday.

“I’ve played on the right side here and there throughout my career, but definitely the highest level I’ve had to play at right side,” Guhle said. “So it was good to get that and it’s something that’s good to have as a lefty is to be able to play on the right side.

“I would be lying if I said I wasn’t a little bit nervous and a little bit anxious to know what’s going to happen,” Guhle added about the final cuts. “But whatever happens, happens, I’ll support and take the most of it.”

Harris, another left-hand shot, also played some preseason games on the right side and said he enjoyed the experience of his first full NHL training camp.

“Getting to play in all situations — left or right — with different guys against different teams and just the experience,” he said about what he learned during training camp. “There’s going to be growing pains and you try to learn from mistakes — from positives, from negatives. Just getting those reps in. “

The Canadiens also need to decide what to do with Juraj Slafkovsky, the No. 1 overall pick at this year’s NHL draft. All the injuries at the forward position will probably open a spot for him to at least start the season with the Canadiens.

Harris said there were positives to take away from the preseason even though the Canadiens didn’t win a game.

This season is going to be all about development as the Canadiens try to rebuild after finishing with the worst record in the NHL last season. They have a lot of young, talented players, but that doesn’t mean there will be a lot of wins and this team has a better shot of having a good lottery spot to win the No. 1 overall draft pick again next year than of making the playoffs.

That wouldn’t be a bad thing considering that Connor Bedard is the top-rated prospect for next year’s draft and is considered to be a generational talent.

But are Canadiens fans willing to be patient during this rebuild?

“Patience is part of development and growth and I’m aware that sometimes results can test your patience,” he added. “But to me, it’s just sticking to what I believe in our plan and the plan is the growth of our young players.”