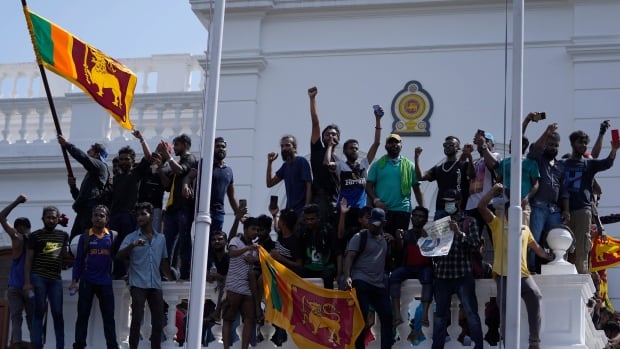 Aid agencies are warning the health and well-being of six million Sri Lankans could be in peril as the country contends with extraordinary political upheaval and a punishing economic collapse.

Ousted president Gotabaya Rajapaksa fled the country Wednesday, the day he was set to resign under intense public pressure to step down because of his handling of the country’s finances.

Several factors have caused Sri Lanka’s foreign currency reserves to dry up, leaving the government unable to pay for vital imports of food, cooking gas, fuel and medicine — all of which are in short supply.

Observers are warning that if the situation doesn’t improve soon, one-third of the country’s of almost 22 million people could plunge further into food insecurity as the country endures its worst financial crisis since gaining independence in 1948.

The World Food Programme (WFP) warned some 62,000 Sri Lankans are in such a dire situation they require urgent help.

Food insecurity is defined by the United Nations as the “lack [of] regular access to enough safe and nutritious food for normal growth and development and an active and healthy life.” Severe insecurity means a person has “run out of food” and may go a day or more with nothing to eat.

Hunger in Sri Lanka by the numbers

Food inflation rose 80 per cent in June, compared to a year earlier, according to Sri Lanka’s Central Bank, while the economy tumbled and food and fuel supplies continued to dwindle.

The UN said more than 60 per cent of Sri Lankans were already choosing to limit meals to stretch their food budgets. In one dire example of the lengths some vulnerable people need to go in order to eat, Britain’s Sky News reported some families travel nearly 10 kilometres on foot to get free meal from a community kitchen in Colombo.

In an appeal to donors, the charity Save the Children estimated last week 12 per cent of the country’s poorest households are taking “crisis level” steps to survive the food shortages and economic collapse. These measures include borrowing money, taking children out of school or selling belongings, the organization said, citing its own survey of more than 2,300 families.

There’s an acute concern for pregnant or breastfeeding women, and children, according to the WFP. The agency said a national school meal program that “provides nutritious meals to one-in-four schoolchildren” has faced disruptions, and a nutritional support program for nursing mothers and young children “has been cut.”

“Coupled with income losses, this could lead to higher rates of malnutrition among women and their children,” WFP said.

Domestic food production also took a hit by the Rajapaksa government’s April 2021 decision to ban the importation of chemical fertilizers and agrichemicals, including herbicides and pesticides, in an apparent shift to organic agriculture. But the move was abrupt, with no plan to import organic fertilizers and no boost in domestic production.

By the time the ban was partially reversed in November, farmers reported a 40 to 50 per cent loss in rice paddy crops, the UN’s Resident Coordinator in Sri Lanka, Hanaa Singer-Hamdy, told the Daily Mirror last month. Fruit, vegetable and tea crops also suffered.

“Low-income households are the hardest hit and [are] adopting negative coping strategies,” she said.

The cost of chemical fertilizer has also risen dramatically since that time, amid a global shortage, leaving farmers in the lurch.

Impact of war in Ukraine

Russia has been accused of weaponizing food exports in its war on Ukraine to middle and lower income countries, and Sri Lanka appears to be one of the casualties.

Ukraine is a principal exporter of grain to lower income countries; it’s the fifth largest source of food products imported to Sri Lanka, according to the World Bank.

Ukrainian President Volodomyr Zelensky placed blame for the crisis in Sri Lanka on Russia, in a video address to the Asian Leadership Conference in Seoul, saying it should serve as a warning about the global implications of Russia’s invasion and blockade of Ukrainian grain and food shipments.

“The shocking rise in food and fuel prices caused a social explosion. No one knows now how it will end. However, you all know that the same outbursts are possible in other countries affected by food and energy crises,” Zelensky told the conference.

Is there any relief in sight?

Prime Minister Ranil Wickremesinghe, appointed acting president by Rajapaksa before he fled, informed parliament of the government’s intention to host an international donor conference that will include major Asian donors like India, China and Japan. According to the Economic Times, that won’t happen until Sri Lanka can reach a bailout agreement with the International Monetary Fund, though the Central Bank’s governor cautioned the current political instability may delay talks further.

Sri Lanka’s parliament is poised to elect a new president on July 20.

Last month, the United Nations made an appeal for $47 million US in humanitarian aid funding, to assist 1.7 million Sri Lankans in need until September.

in a statement to CBC News last week, Global Affairs Canada said the federal government provided an initial $50,000 in humanitarian assistance in May through the International Federation of Red Cross and Red Crescent Societies.

On The Coast8:28Sri Lankan immigrant puts unrest in context

Raj Retnanandan, a Calgarian who immigrated from Sri Lanka in 1981, weighs in on the economic and political unrest in Sri Lanka, and suggests a path to stability, prosperity and trust in his former country.