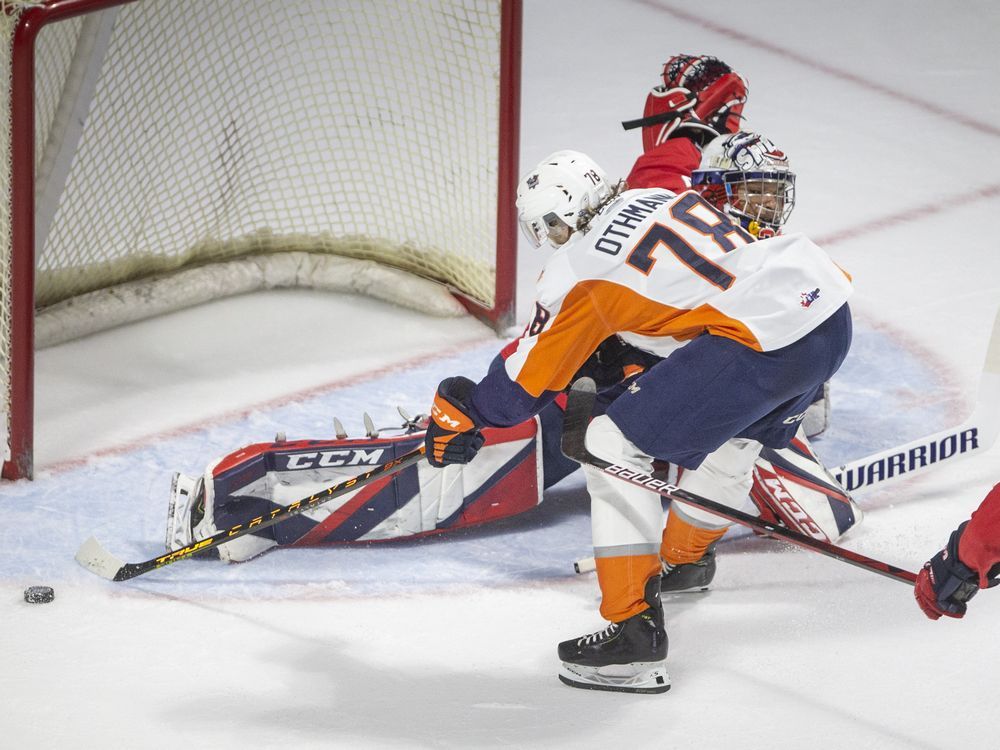 The Windsor Spitfires completed the comeback from the brink of elimination.

Facing elimination for a second-straight game, the top-seeded Spitfires instead punched their ticket to the Ontario Hockey League championship for the first time since 2010 on Wednesday.

Sparked by overage forward Daniel D’Amico’s two goals in the first period, the Spitfires beat the third-seeded Flint Firebirds 4-0 before a season-high crowd of 6,335 at the WFCU Centre on Wednesday to take the best-of-seven series 4-3 and claim the Wayne Gretzky Trophy as Western Conference champs.

Windsor will now advance to the OHL final to face the Eastern Conference champion Hamilton Bulldogs, who have yet to drop a playoff game. Game 1 of the best-of-seven series is Friday in Hamilton.

Windsor took seven-of-eight meetings with the Firebirds in the regular season to overtake Flint for the top spot in the Western Conference, but it was a far bigger challenge in the conference final.

The Spitfires dropped the series opener and from there played chase against the Firebirds, who held series leads of 1-0, 2-1 and 3-2.

Windsor found a few heroes in erasing the deficit against the Firebirds. Goalie Xavier Medina started the season as the club’s No. 1 man in net, but was overtaken by Matt Onuska for the top spot.

But Onuska went down with an injury in Game 5 on Sunday and the Spitfires turned back to the 20-year-old Medina, who had not appeared in the team’s first 16 playoff games. In his first start since April 16 on Tuesday, Medina made 31 saves in the crucial Game 6 overtime win on the road to send the series back to Windsor. He followed the effort with a 38-save effort on Wednesday to record his first career OHL shutout in 70 career games combined between the regular season and playoffs.

Offensively, D’Amico, who was not only facing playoff elimination, but the end of this junior hockey career, found a new level of play in keying back-to-back wins for the Spitfires to capture the series.

A 32-goal scorer during the regular season, D’Amico produced just two goals in the club’s first 13 playoff games, but potted seven in the last five games of the Flint series. That included back-to-back multi-goal performances in must-win games.

D’Amico got Windsor rolling less than eight minutes into the game on Wednesday. Jacob Maillet forced a turnover and fed D’Amico, who stepped over the blue line and ripped a shot past Firebirds’ goalie Luke Cavallin.

D’Amico again took advantage of another turnover forced by a teammate. Matthew Maggio got position on a Flint defender to take the puck away and fed D’Amico, who quickly whipped it past Cavallin to give Windsor a 2-0 lead after 20 minutes.

Flint had its chances to get back in the game with three power-play opportunities through the first 40 minutes, but Windsor yielded few high-end scoring chances and Medina handled whatever came his way.

Late in the second period, Alex Christopoulos gave the Spitfires some breathing room as he finished off a nice three-way passing play with Ryan Abraham and Oliver Peer.

Flint pulled Cavallin with nearly five minutes left to play in the third period, but that just opened the door for D’Amico to complete his hat-trick and seal the victory.

After missing eight games, forward Pasquale Zito celebrated his 19th birthday on Wednesday by returning to the Windsor lineup for the first time since Game 3 of the conference semifinal series with Kitchener on May 10th.

Zito, who has been sidelined with an upper-body injury, took the pre-game skate before Game 5 of the Flint series, but did not dress until Wednesday’s game. He started on the fourth line, but the Detroit Red Wings’ draft pick finished the game on the club’s top line with Wyatt Johnston and Will Cuylle.