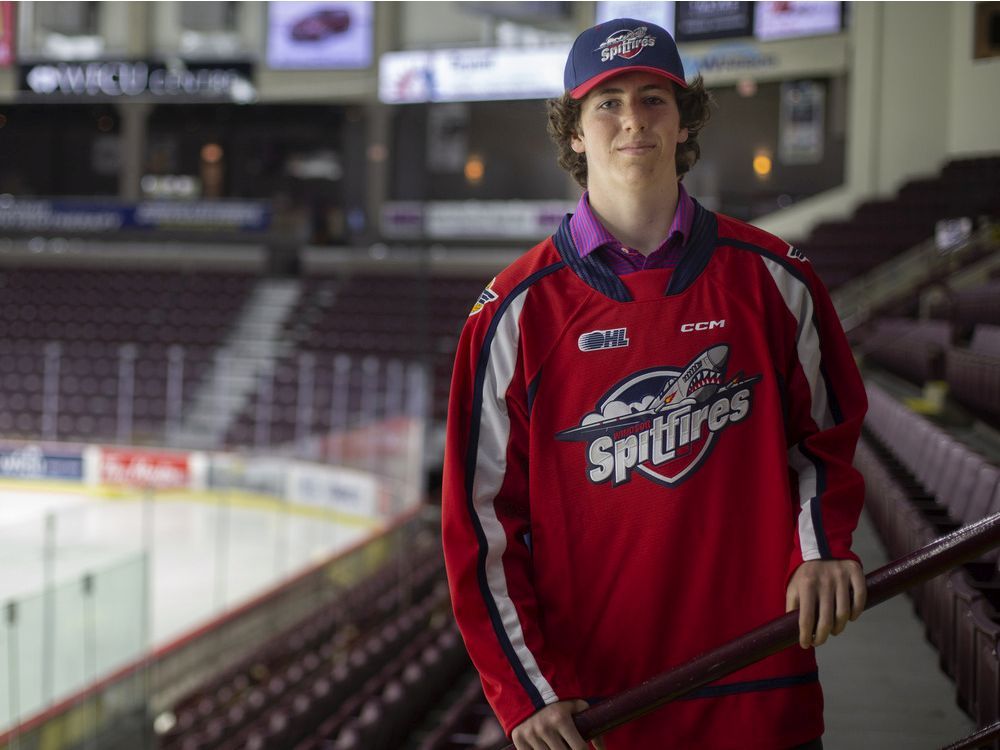 A.J. Spellacy had five NCAA Division I football scholarship offers on the table and that number was only going to grow with another two years of high school ahead of him.
Instead, the 6-foot-3, 195-pound Spellacy officially walked away from football on Wednesday and signed a standard player and education package to join the Windsor Spitfires.
“I’ll miss football a little, but I’m focused on hockey,” the 16-year-old Spellacy said. “I thought about it for a long time. It was pretty easy, once I got all the information, which one I love and want to take farther and that was hockey.”
Spitfires’ general manager Bill Bowler rolled the dice in a big way by using a third-round pick to take Spellacy in the third round of April’s Ontario Hockey League Draft.
“There were no assurances, but it was a calculated risk,” Bowler said.
The Spitfires hoped the city’s proximity to his home in suburban Cleveland would make the move a little easier. The club also had a connection with Spellacy’s agent. More than a decade after helping the Spitfires to a Memorial Cup title, Kenny Ryan, who serves as Spellacy’s agent with the Kaizen Sports Agency, drew another assist for Windsor.
“With myself playing in Windsor, it was a phenomenal organization,” Ryan said. “It’s a first-class organization where a lot of players would want to play, but for me it was what (Spellacy) would want to do? It was what he wanted to do and what his passion was going forward.”
Had Spellacy been committed to the OHL from the start, Ryan said he would have been a first-round pick in this year’s draft.
“There’s a team that said it would have taken him in the first round, but only if he was committed and he wasn’t ready to commit,” Ryan said.
Still, Ryan gives credit to the Spitfires for rolling the dice early on Spellacy with most teams waiting to take a flyer on a player not committed to the league later in the draft. The Spitfires did that with Ryan in 2007 when the club took him in the seventh round of the OHL Draft. The former Toronto Maple Leafs’ second-round pick played two years with the United States National Team Development Program before heading to Boston College, but left in his freshman year to join the Spitfires.
“Drafting American players, there’s always risks,” Ryan said. “Will he sign or come to camp? That’s where Billy, being the GM he is, it was a selection he felt he had to make there.
“Windsor drafted him, but there was nothing set he was going there. After he was drafted, it was more recruiting. A.J. was not ready to commit and it was not just to Windsor, but to hockey or a USHL team or colleges.”
Spellacy and his family made a pair of trips to Windsor to talk and catch a couple of playoffs games and the Cleveland Barons 15’s product quickly fell in love with everything about the team.
“The fans were awesome,” Spellacy said. “All the facilities are top of the line and the city’s awesome. That played big role.”
His father John Spellacy played linebacker at Marshall University and his older brother John Spellacy Jr. played centre on East Carolina University’s football team.
“They both talked to me about it, but ultimately it was my decision to do what I want to do,” said Spellacy, who noted his dad and brother both also played hockey growing up. “I probably would have gotten a lot more (football scholarship offers), but to me hockey’s a lot more fun and less stress on your body.”
With Spellacy, the hockey potential is just scratching the surface at this point. A free safety and wide receiver in football, he often didn’t get into hockey until late November each year.
“I’ve never really trained for hockey,” Spellacy said. “I’m putting in a lot of work. Hopefully, my potential is high.”
A right-handed centre that can play the wing, Bowler and Ryan both refer to Spellacy as an elite skater.
“He’s a (two-sport) athlete and for him to choose hockey and the Windsor Spitfires, we’re ecstatic,” Bowler said. “This is a raw player with unlimited potential and unlimited ability.
“We just see a potential huge talent for our hockey club. Just an athletic kid with determination and drive. For a guy that size, his skating is already elite. A big frame that covers a lot of ice. A real good player who, with more reps, we just see the future is so bright.”
He attended the U.S. NTDP camp in March, but the fact he didn’t make the cut, or his decision to weigh his options might have cost him a first-round selection in the OHL Draft, do not weigh heavily on his mind.
“I don’t care at all,” Spellacy said. “I’ve signed. It doesn’t matter what round you get taken; you still have to show what you can do.
“I got picked by the Spitfires, so that was pretty awesome. I know where I’m going to play and you just keep moving forward. The other stuff doesn’t matter anymore.”