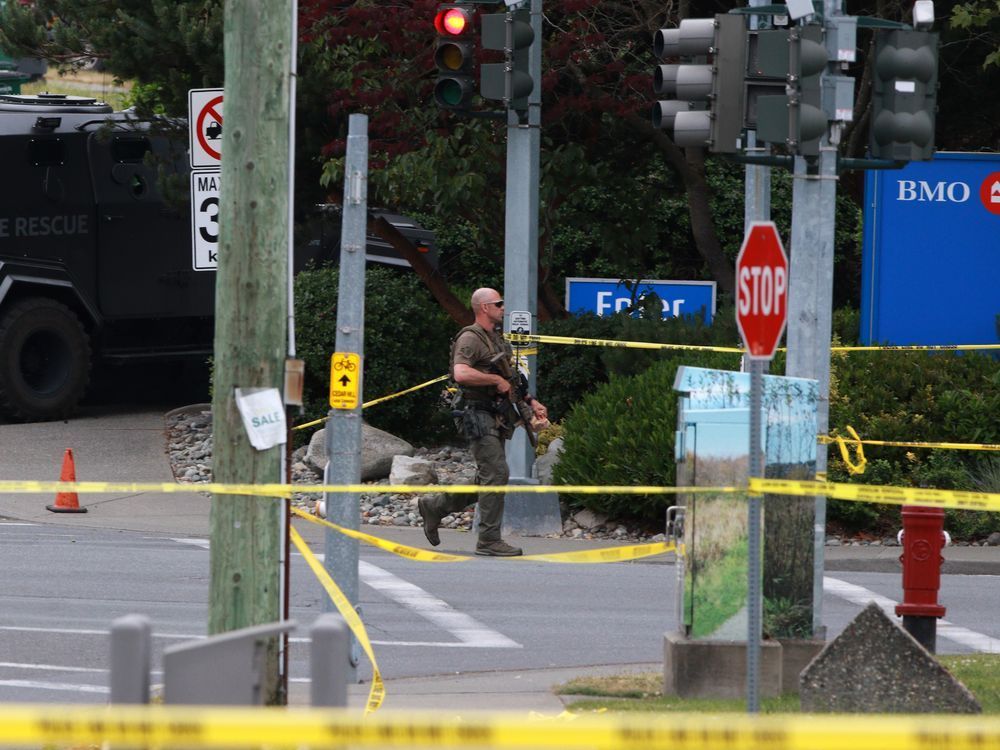 New details have emerged from last month’s bank robbery and shootout on Shelbourne Street, as one of the injured police officers moves out of intensive care.

The two 22-year-old robbery suspects from Shawnigan Lake were killed in a gunfight with police outside the Bank of Montreal branch in the 3600 block of Shelbourne Street.

A Victoria woman who was inside the bank when it was robbed said Monday that as she entered the bank with another woman, she heard a man yelling. Later, she realized he must have been trying to warn them not to go in.

Lesa, who did not want her last name used, said when she walked in, she noticed an older woman sitting on the floor. She said a young man carrying what appeared to be a  rifle approached her and stopped less than two feet away.

“As soon as I came in, he walked toward me and said: ‘Get down.’ ” She sat on the floor in the closest office and later moved into the doorway of the vault near those already in the bank. Both of the men were “so calm, so composed,” Lesa said, describing the situation as eerie and surreal. “There was no agitation in their body language.”

While the men were waiting, “it was dead silent,” she said.

The door to the vault was open, she said. She does not know if they took any money out of it. One of the men had money in his hand, she said, adding they had a black bag that was about a quarter to a half full.

Bank staff told the men there was no more money, she said.

The two did not immediately leave, but waited in the building. Lesa does not understand why they remained inside the bank. “They could have just left.”

The group then heard someone call out “police,” followed by the sound of gunfire. She and one man ran into the vault, which had a cage door that locked, while others went to another area.

Lesa was terrified that her husband, who had been waiting for her outside, might have been hurt in the gunfire, but he turned out to be safe. A police officer found him to say that Lesa was unhurt, she said.

When the shooting ended, police came into the building and took everyone to the Victoria Police office to take statements. A bank staffer opened the cage to the vault.

Lesa was further shaken by a neighbourhood lockdown a few days later when someone reported seeing a suspicious man. At the time, police suspected that a third person might have been involved in the robbery. Lesa said she has found herself shaking and experiencing panic attacks. She said she is very thankful to police.

Six Greater Victoria emergency response team officers — three from Victoria police, three from Saanich — were taken to hospital after being injured in the shootout outside the bank. Three were treated and released. Staff and customers in the bank were unhurt.

Brothers Mathew and Isaac Auchterlonie, part of a set of triplets, were later identified as the suspects killed at the scene. The brothers had been employed by Pacific Energy Fireplace Products in Duncan between November 2021 and June.

“While employed with us they gave no indication of the behaviour they were capable of,” the company told the Times Colonist. The company said it wants to thank the police officers who responded to the call. “We wish those wounded in the line of duty a full and speedy recovery.”

Pacific Energy said it is fully co-operating with authorities.

The brothers graduated from Frances Kelsey Secondary School in Mill Bay. Those who knew them said they were reserved and kept to themselves. Isaac Auchterlonie’s Instagram account showed photos of the two shooting guns and included anti-government and anti- vaccine statements.

The Vancouver Island Integrated Major Crime Unit and the Independent Investigations Office are handling the case.

A re-integration program has been set up for officers affected by the incident, to reduce the chances of long-term psychological injury. Officers and staff are taking part in critical-incident debrief sessions with peer support and a psychologist.

The Saanich Police Association and the Victoria Police Union have set up an online fundraiser at gofundme.com to assist officers in their recovery and future needs. As of Monday evening, 1,400 donations totalling just over $254,000 had been raised.