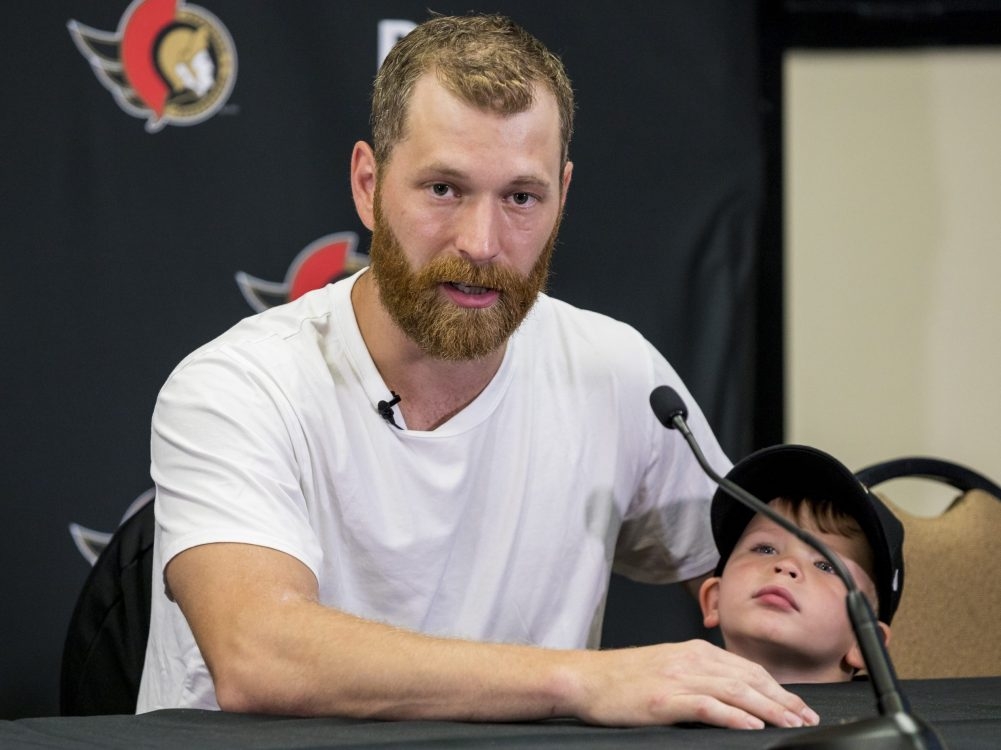 BELLEVILLE — Claude Giroux has made his presence felt at Ottawa Senators training camp.

Fans of the Senators will get a first-hand look Saturday night when he suits up at the Canadian Tire Centre for the first time since signing with the club in July. The Senators will be playing against the Montreal Canadiens in the only 2022 pre-season game Ottawa has at home.

“What people don’t know about him is he’s a really quiet guy and he wants to win,” coach D.J. Smith said. “He’s competitive and he didn’t just come here to come home and play games. He wants to win, he wants to be a part of this team being better.

The expectation is Giroux will start the on the right side of centre Tim Stutzle and winger Alex DeBrincat. Trying to get the special teams units ready for the season, Smith made a bit of switch by taking Stutzle to face the Leafs.

Stutzle will be part of a power play unit with captain Brady Tkachuk and winger Drake Batherson, so the coaching staff wanted to see them together. As a result, they all made the trip here. Shane Pinto was in the middle of the other unit with Giroux and DeBrincat, and that trio will face the Habs.

“Everybody is comfortable with the position that we’re in right now,” Giroux said. “At the end of the day, we’re here to win hockey games. Whoever is putting the puck in the net is going to be on the ice and there’s nobody upset with where they’re at and who they’re playing with.

“We’re just happy that we’re going to be pushing each other.”

Giroux is doing his part to make the players around him better. He has spent time during skates working with the young players on taking draws.

Radio analyst Gord Wilson noted Thursday that Giroux has taken 17,390 faceoffs in his career and has won 55%. That’s an incredible stat, because a big part of this game is about having the puck, and winning draws is key.

Giroux said he’s trying to do whatever he can to help and Stutzle sought some advice. The likes of Josh Norris and Pinto also have been able to get some knowledge.

“Timmy asked me to help him about and I told him to close his eyes and go as hard as he can,” Giroux said with a smile. “With experience and with a lot of years, you’re able to learn some tricks that you’re good at.”

Giroux suited up for 1,000 games with the Philadelphia Flyers. He had the chance to play with the likes of Mike Richards, Daniel Briere and Chris Pronger to learn about leadership.

“I want to win some hockey games,” he said. “That’s why we’re teammates, that’s why we’re in it together. They help me as much as I help them. We’re all in this together and anytime you have a chance to help a teammate out or give him a little tip, whether they listen or not it doesn’t really matter because we’re just trying to help each other.”

Forward Derick Brassard will get a good opportunity to show the Senators what he’s got with Montreal in town. He’ll skate between DeBrincat and Giroux in this one.

The 35-year-old Brassard is trying to earn a contract in a fourth-line role, but Smith wants to see what he can contribute while playing a few more minutes. He was with the Senators from 2016 to 2018, and would like to finish his career here.

“As an aging player, he just has to continue to show that he can play at the same pace that he’s always played at,” said Smith. “I think he’s gotten better in every scrimmage and every game. (Saturday) will certainly be the biggest test.

Smith will use Brassard with the man-advantage. Why? The guy has played 951 games in his NHL career, he has played in that role before, and if the Senators run into injury trouble, he’s a good safety net to have.

“He has that ability to help in all scenarios,” Smith said. “With split squads with one group going to (Belleville) and another going (in Ottawa) it’s an opportunity for him to get a chance at doing that.

“He’s good at it, he’s done it before and it gives him another check mark in his box if he proves that he can do it.”

Goaltender Cam Talbot was scheduled to play 60 minutes against the Habs, but that won’t happen. He’s day-to-day with an undisclosed injury and Mads Sogaard will play. “(Talbot) should be back after that. It’s nothing serious, but you wouldn’t make him play in this kind of scenario,” Smith said. “He just got a puck under his equipment (Thursday) and if this was the regular season he could play with no problem. There’s just no point.” … Toronto forward Wayne Simmonds on playing in Belleville. “I only played one game there. The only thing I remember is the Olympic-sized ice and it wasn’t the best thing for me,” Simmonds said with a chuckle.