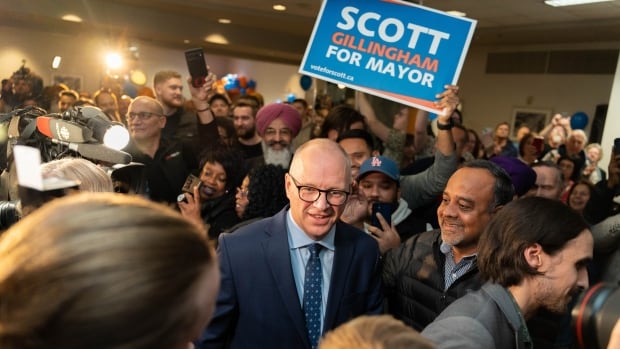 Scott Gillingham never came close to surpassing Glen Murray in any of the opinion polls throughout Winnipeg’s 2022 mayoral campaign.

But in the end, the two-term councillor with the fully costed platform defeated the former Winnipeg mayor with a grandiose vision, but a work record that raised questions.

In an election campaign that offered voters an array of ambitious and even innovative ideas to solve the city’s problems from 11 candidates, voters chose the one who appeared to offer the most realistic and meticulously detailed platform on Wednesday night.

The chair of the University of Winnipeg’s politics department says he was “not entirely surprised by the results.”

“The few polls that were made public” in the campaign’s last weeks “suggested that Glen Murray had sort of hit a plateau, and we saw other candidates that were surging,” said Aaron Moore.

“There were so many undecided voters too, that there was a possibility for a candidate like Scott Gillingham to pick up and surpass Glen Murray.”

From the moment Murray — who served as Winnipeg’s mayor from 1998 to 2004 — entered the mayoral campaign, he remained the odds-on favourite to win, according to polls.

The earliest poll in the campaign, released in the middle of summer, gave Murray a seemingly insurmountable lead, with 44 per cent of decided voters saying they favoured him — 28 points ahead of Gillingham, who sat in second place.

That lead appeared to erode over the course of the campaign, as Murray fell to 28 per cent in an October poll commissioned by Gillingham’s campaign.

According to unofficial results from the City of Winnipeg, Gillingham ultimately pulled in the support of 27.54 per cent of voters on Wednesday to Murray’s 25.29 per cent — a split of just 2.25 percentage points, making it the closest mayoral race since 1977.

Gillingham’s share of the vote is also the lowest popular vote percentage of any mayor in recent memory. Susan Thompson had the second-lowest percentage, with 38.3 per cent in her 1995 win.

And with voter turnout at 37 per cent, Gillingham has one of the weakest mandates in modern Winnipeg history.

Murray’s fall in the polls followed a series of critical stories about his time as leader of the Pembina Institute, an Alberta-based clean energy think-tank. Former employees alleged sexual harassment, poor management and chaotic behaviour by Murray, who worked with the institute in 2017 and 2018.

“I’m sure some of the allegations against Glen Murray impacted his support,” said Moore. “It may be that voters didn’t go to Scott Gillingham. They might have gone to another candidate, but I’m sure that did have some impact.”

“At one point he said he’s going to freeze taxes, and then he said, ‘I’m going to increase the business tax,'” he said.

“Scott Gillingingham was, I think, out of all the candidates except for maybe Shaun Loney, providing the most concrete platform and actually explaining how he was going to pay for it going forward.”

Murray said he’d push the province for an entirely new provincial funding arrangement by replacing the city’s operating grant with one percentage point of the provincial sales tax.

Gillingham, meanwhile, called for a tax increase and linking the operating grant to growth in the PST or urban gross domestic product.

Klein wanted to use cadets in police stations and sheriffs in hospitals in order to put more uniformed officers on the street, while Gillingham proposed using statistical analysis and reinstating a criminologist-in-residence position with the police service.

And while Loney wanted to experiment with social enterprises to leverage the private sector to deal with social problems like homelessness, Gillingham said he’d use existing city land to provide temporary shelter.

Fiscal issues became one of the clearest dividing lines between candidates in this election.

Murray’s pledge to freeze the property tax, while raising the business tax and pushing the province for a slice of the PST, was perhaps the most radical idea to fix the city’s finances, although many observers and rival candidates called the idea unlikely and even irresponsible.

Gillingham and Loney both proposed to raise the property tax — by 3.5 per cent and 3.7 per cent respectively — up from the 2.33 per cent increase currently in the budget.

Klein reluctantly committed to keeping the 2.33 per cent increase, although he made it clear that in the future he would seek to reduce it.

Out of the four leading candidates, Moore said Gillingham’s plan was the most realistic.

Loney, who was the first of the 11 candidates to announce his plans to run, steadily amassed a large volunteer base despite never having run for political office.

With policy ideas informed by his background as a social entrepreneur, Loney appealed to voters looking for an alternative to politics as usual.

In a crowded field, he consistently out-polled many other candidates with more experience in electoral politics. He ended up fourth on Wednesday night, behind Gillingham, Murray and Klein, with 14.7 per cent of the vote.

Rana Bokhari led the Manitoba Liberal Party from 2013 to 2016, but never polled higher than single digits. She placed seventh of the 11 candidates, with three per cent of the vote.

Robert-Falcon Ouellette, who came in third in the 2014 mayoral election and served as the member of Parliament for Winnipeg Centre from 2015 to 2019, also trailed behind Loney in the polls and finished fifth on Wednesday, with 7.7 per cent of the vote.

While most campaigns usually see one or two front-runners emerge a few months in, what started out as a race dominated by a single candidate became tighter, with several high-profile candidates, said Moore. That might have had an impact on the results, he said.

“We have former leaders of provincial parties, former councillors, former mayors, and I think that’s really added a new dynamic to the selection that I haven’t really seen in other places,” said Moore.

Voters returned all but one of the incumbent councillors who ran for re-election on Wednesday, many of whom have a good relationship with Gillingham, Moore said.

Gillingham may be able to leverage that working relationship with the councillors “to start actually achieving things,” Moore said.

The fact that voters elected someone who promised to increase taxes suggests “a shift in the attitude of Winnipeggers,” he said.

“If he’s able to implement these property tax increases and they’re able to use that funding wisely, that will be to the betterment of the city,” said Moore.

“But I think he’s going to need the results to be somewhat visible in the next four years, or else people are going to start questioning the benefits of the increases.”