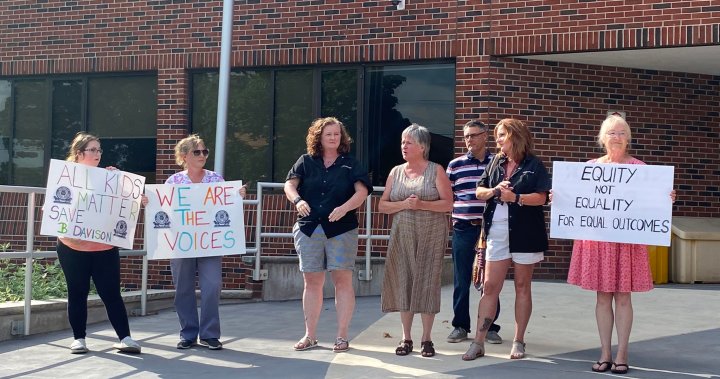 The Thames Valley District School Board approved two motions to support current students and review previous enrollment initiatives, but halted admissions has some questioning if it will make a difference.

TVDSB trustees met Tuesday night for a special board meeting to provide a public update on enrollment trends and future plans for B. Davison Secondary School in London, Ont.

The meeting comes as some parents and students allege the vocational school’s programming is quietly being shut down, with students entering Grade 9 advised not to apply.

But TVDSB staff say that’s not the case, arguing that streaming Grade 9 students into locally developed programs limits their potential at an early age, and the drop in enrollment is due to increased programs at mainstream schools.

One of the area’s only vocational schools, B. Davison offers students locally developed programs, supports and classes to help students enter the trades directly after graduating.

The first asks the TVDSB administration to present a report by September 2022 that updates a previous motion from July 11, 2013. The 2013 motion asked that “every effort be made to expand and enhance program offerings” at B. Davidson and that the board “ensure that student needs and community future employment opportunities are being addressed” as well that details about the school be sent to parents of Grade 7 and 8 students each year.

The board’s second motion called for staff to present a report by November 2022 on a “creative plan to support current students at B. Davison with fulsome programming, which includes revised budgets and special education funding.”

Parents and advocates for the school, located at 785 Trafalgar St., have said the board has actively stopped promoting the program and that students have been denied entry.

Director of education Mark Fisher denies the board has done anything to dissuade enrolment at B. Davison, attributing the drop in enrollment to a lack of student interest.

“It came to our attention last year, when we had single-digit interest in the program, that it would not be sustainable. So then we took a look at what is the actual program that is being offered there,” Fisher said. “It did not allow for the college, trade, or university pathway.”

During the meeting Tuesday, associate director of education Riley Culhane said in 2021, they only had five applications for enrollment in Grade 9, which made it impossible to offer a Grade 9 class.

“There was no communication that went out to schools that suggested that we were not accepting registrations at B. Davison and that, as I mentioned in the verbal report, the enrollment at B. Davidson has been steadily declining for well over a decade,” Culhane said.

Several trustees questioned the validity of this number and if it was due to a drop in interest or lack of access.

“I’m going to reiterate some of the concerns raised in that I’m questioning… not the integrity of the staff at all, but the validity of the number of five, because we’ve certainly received at least twice as many, if not more, concerns from community members that they were told they could not register. So there were clearly more students that were interested in registering than were recorded,” trustee Sean Hunt said.

With a class size of 19 students, advocates have criticized the lack of classes and resources for current students.

But Thames Centre deputy mayor Kelly Elliot, who has been a strong, outspoken supporter of the school, told Global News this comes too little too late. “This should have been happening two years ago when reports were first made that Grade 9 students weren’t being enrolled.”

Elliot was with a group of supporters at the meeting to advocate for the current programming at B. Davison.

“They stuck to the story that they only had five interested students. I know on the Facebook page they’ve already made a post, and they already have 11 students saying they tried to get in and didn’t,” Elliott said.

Trustee @lapizzolato points out Culhane said that students need to be in their home schools with wide range of students. She points out #TVDSB offend lots of gifted + targeted programs. Why not Davison.

How one London, Ont. teacher is promoting authentic learning by ‘ungrading’

Despite previous speculation, the TVDSB said that the school would not be closing, but that changes would need to be made.

“There is no conspiracy here. What we’re trying to do is what is best for our kids and our communities. Full stop,” Fisher said.

TVDSB Secondary School Attendance Area Review will begin during the 2022-2023 school year, and the public will have the chance to provide input.

“They have said time and time again, and they said it multiple times tonight, they are going to repurpose that school,” Elliott said Tuesday. “They are not repurposing that school to what B. Davison is today. So whether or not you are going to close the building means absolutely nothing — you are closing B. Davison Secondary School as we know it.”

Mr. Culhane states that NO communication went to staff or support staff that Davison was not accepting students. Again claims it was an organic reduction of students registering.

I have #TVDSB staff who will ABSOLUTELY disagree with this. pic.twitter.com/3vexWe40Sk

Despite doubts about the impact the meeting would have, Elliott praised trustees for the action taken.

“I think they held senior administration to the fire in a way they have never done before. They asked hard questions, and they really pushed to get answers,” she said.

“You could really tell that the public engagement that the trustees had received prior to this meeting in order to get stories from parents and students and success stories from Davison and graduates really played a key role in what happened tonight.”