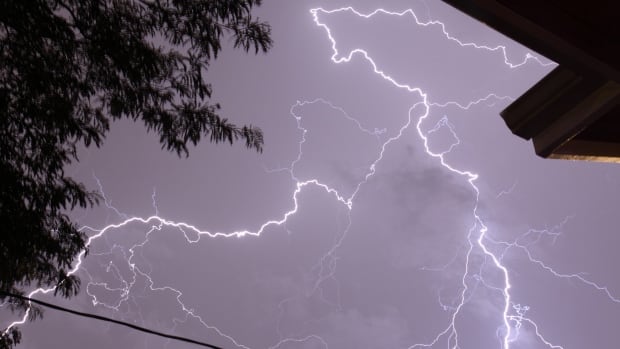 WARNING: This story contains images and descriptions some readers may find disturbing

A family from Mankota, Sask., says they lost 28 cattle to a lightning strike last Friday.

“It’s a big loss but could have been a lot worse,” Glen Briere told CBC’s Afternoon Edition.

The Briere family was not at home in Mankota, some 270 kilometres southwest of Regina, when the lightning struck. They suspect the cattle were trying to get away from the storm and came to the fence in their pasture where it happened.

There were 14 cows, 13 calves and a herd sire among the dead.

“I could not believe why these cows had their heads in the fence or half of their bodies were into the fence,” he said.

“One calf we found there was right through the fence and he was pointing 40 feet on the other side. It kind of blew him right into half.”

Glen said find his cattle in this condition was a hard pill to swallow.

“But you never ever think that you are going to lose so many at one time. It’s so shocking. Within a second, things can change like this,” she said.

“The 14 cows that are dead, they were all bred. We lost mothers and babies inside them,” Darla said.

The Afternoon Edition – Sask8:34Family from Mankota Sask. lose close to thirty of their cattle to lightening strike

This summer has produced many thunderstorms in areas across the province. Some places have seen strong winds, tornados, hail, heavy rain and lightening. Glen Briere and his wife Darla returned home to find 28 of their cattle had died because of a storm. Glen and Darla joined the show to tell us more.

She said the family was fortunate to have insurance on the cattle, but the lost calves also mean they will be short of animals for their sale next March.

On top of the financial hit, having to dig a hole and bury the animals took an emotional toll.

“I was dragging them out of that awful fence to the hole. It was quite the disgusting smell.”

This summer has produced many thunderstorms, strong winds and 15 tornado touchdowns so far in Saskatchewan.

Chris Vagasky, meteorologist and lightning applications manager at Vaisala, a company that assess patterns of environment, said they detect 2.5 billion lightning events around the world every year.

Vagasky said there are five major ways lightning can kill or injure a person or an animal, with direct lightning strikes not always being common.

“In this case, all the cattle were standing against the fence and the fence was struck by lightning,” Vagasky said.

“The electric charge ran down the fence and hit each of the cattle that was standing against the fence and that’s called conduction.”

Vagasky said animals are harmed by conduction relatively frequently across the world.

“Any type of animal is at greater risk of lightning because their four legs are further separated than human legs,” he said. “When lightning strikes, it goes through one set of legs, crosses their body and then out through the other pair of legs.”

Vagasky said there has been a lot of lightning across the Prairies recently.

“We have detected thousands of lightning strikes across southern Saskatchewan just over the weekend when these cattle were killed,” he said.

He advised seeking shelter when a storm is brewing.

He said not to touch any plumbing or anything plugged into the wall when lightning is striking.