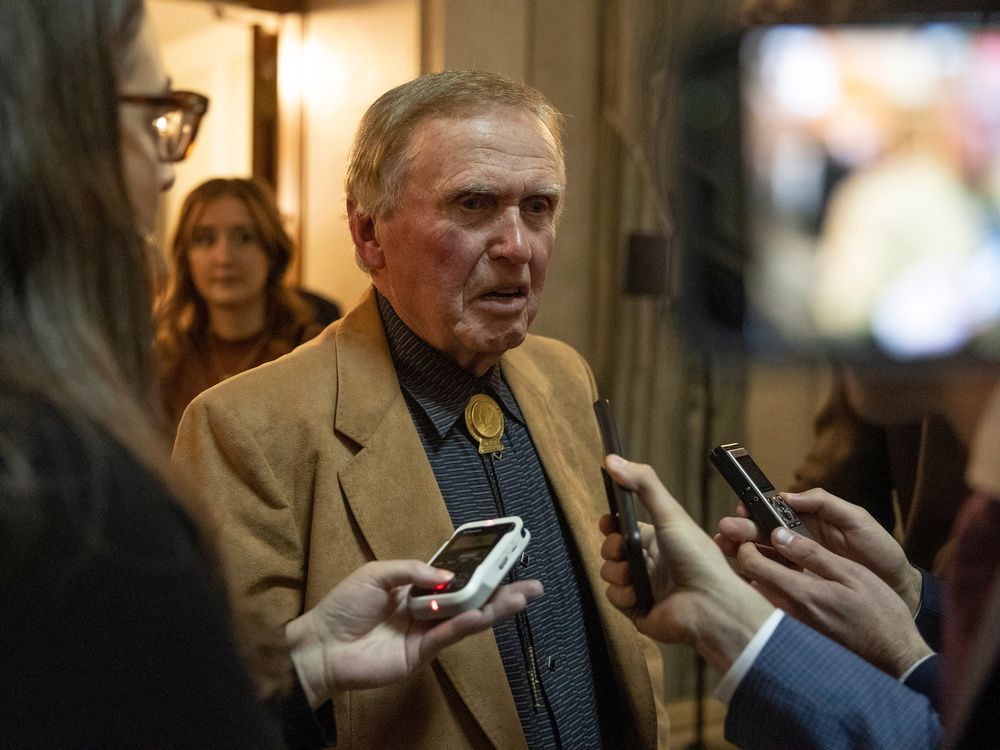 “In retrospect, this was an error in judgment as his presence was a distraction from a very positive and forward-looking Throne Speech, which included a number of new initiatives to keep Saskatchewan families safe in their communities,” Stewart said in a written statement issued Thursday morning.

After he left the chamber, Thatcher, a one-time MLA and former Tory cabinet minister, told reporters he was invited by Stewart, the Lumsden Morse MLA, to attend the annual ceremony.

Thatcher was convicted in 1984 of first-degree murder in the death of his ex-wife, JoAnn Wilson, after she was beaten and shot in the garage of her Regina home in the midst of a protracted custody and divorce battle.

“We are old friends,” Thatcher said when referring to Stewart, while he stood beside one of his acquaintances after the speech. “We are happy to come down.”

He declined to take further questions.

On Wednesday, Stewart described the invitation to Thatcher as “my decision alone.”

Stewart, a former Saskatchewan agriculture minister, has also been involved in addressing the province’s economic autonomy concerns. Reporters had asked to interview him, but he was not made available.

Tell was asked whether Thatcher’s invitation appears problematic given the province has one of the highest intimate partner violence rates in the country.

Statistics Canada data from 2021 shows the province’s domestic violence rate is more than double the national average. Advocates have said more programs are needed to help people feel safe in their communities.

Tell again said that while Thatcher was found guilty, he went through the court system and is now a “free citizen.” She described him as “infamous.”

Noting the province’s high domestic violence rate, NDP Leader Carla Beck told reporters she believes people will be shocked to learn an invitation was made.

“I’m not out here to defend their reasons for inviting Mr. Thatcher. I do think that is remarkable, again on a day when the government is talking about getting tough on crime,” she said.

“I would ask the government to hold themselves to the same standards, be a little less hypocritical on (domestic violence) and frankly dig in and actually deal with the issue of domestic violence.”

— with files from Jeremy Simes and Barb Pacholik