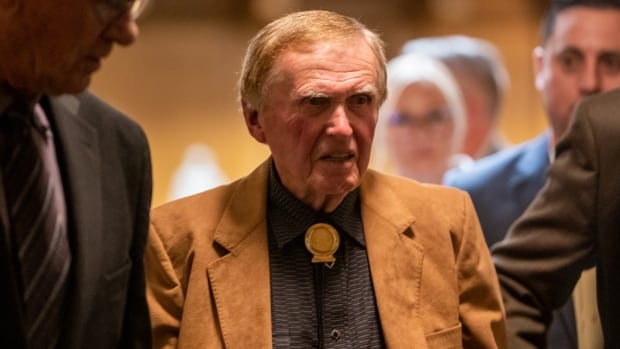 Thatcher was found guilty in 1984 of the first-degree murder of his ex-wife JoAnn Wilson, who was found beaten and shot to death in the garage of her home the previous year.

Thatcher was sentenced to life in prison with no parole for 25 years. He was granted full parole in November 2006.

Stewart released a statement Thursday morning on his decision to invite Thatcher to the speech.

“Each MLA is given the opportunity to invite a number of guests to the Throne Speech. It was my decision alone to invite Colin Thatcher, who is a constituent and long-time friend. In retrospect, this was an error in judgment as his presence was a distraction from a very positive and forward-looking Throne Speech, which included a number of new initiatives to keep Saskatchewan families safe in their communities,” Stewart said.

Thatcher, 84, was a cabinet minister under the Grant Devine government. He resigned from cabinet four days before Wilson was murdered.

The Canadian Press questioned Stewart after the speech Wednesday.

“Colin was a longtime MLA, and he’s a constituent of mine and a friend of mine and that’s why I [invited him] and I’m happy that I did,” Stewart told The Canadian Press.

“If anybody has a right to be here, it’s Colin Thatcher.”

Stewart said Thatcher was, “a fine individual” and has had a tough life because of his time in prison.

Opposition calls for an apology in question period

During the first question period of the fall sitting Thursday, the Opposition NDP called on Premier Scott Moe to apologize for having Thatcher attend the throne speech.

“Saskatchewan has the highest rates of domestic violence in the entire country, more than double the national average it is a crisis. What message does it send to the women of this province when the province extends the honour of a throne speech to a convicted killer?”

“The rates of interpersonal violence in this province are a tragedy. They are numbers and rates we must do everything we can to stand together to bring it down, and we take this extremely seriously. We’ve invested in early intervention and prevention,” Eyre said.

On Wednesday, Minister of Corrections and Policing Christine Tell was asked about Thatcher’s presence, given the throne speech having a tough-on-crime theme. Tell said he had served his time.

“He has a right to be here just like anyone else. He is a free citizen,” Tell said.

Support is available for anyone affected by intimate partner violence. In Saskatchewan,www.pathssk.org has listings of available services across the province. You can access support services and local resources in Canada by visiting this website. If your situation is urgent, please contact emergency services in your area.