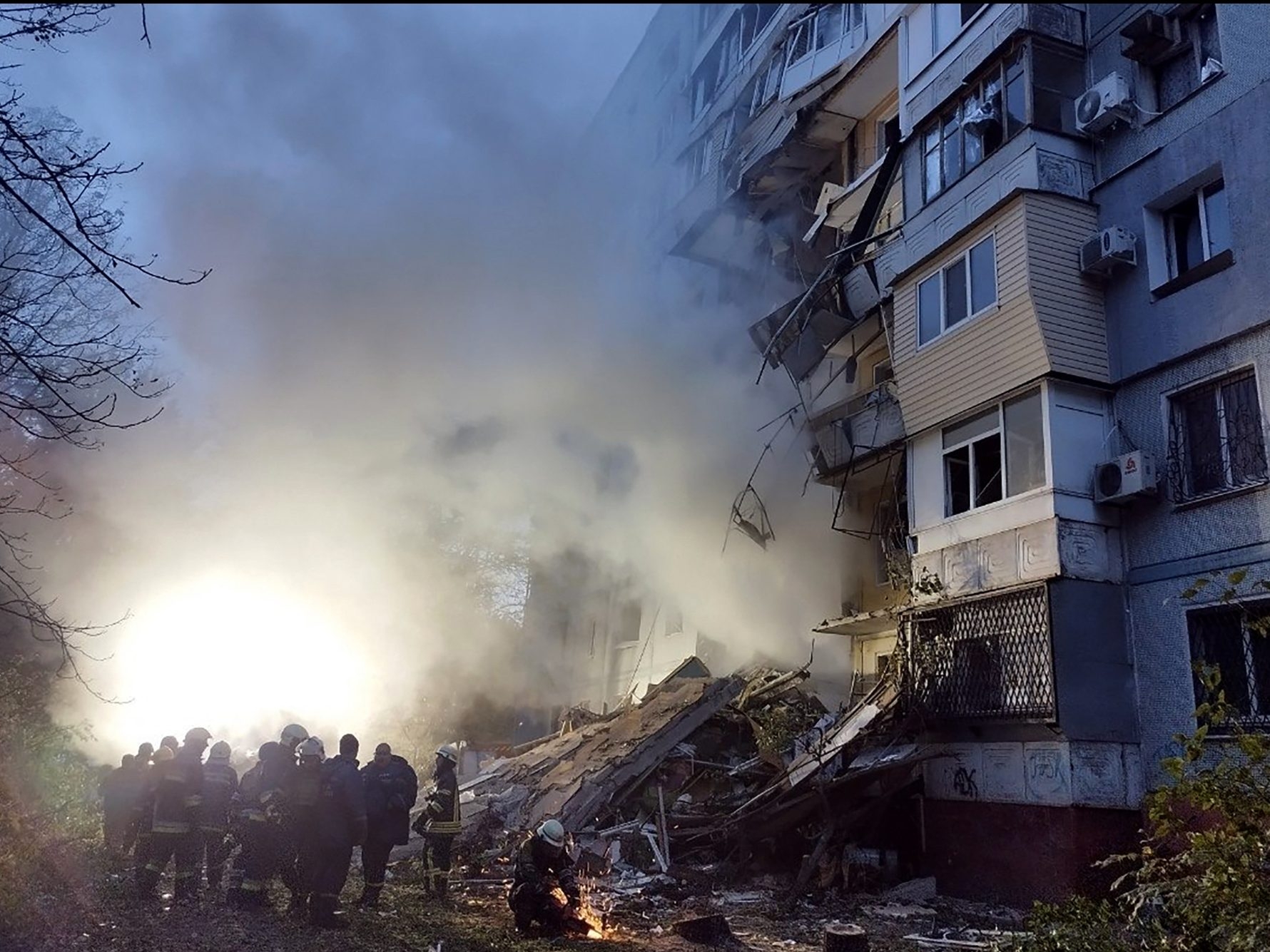 KYIV — A Russian missile attack early on Sunday struck an apartment block and other residential buildings in Ukraine’s southeastern city of Zaporizhzhia, killing at least 13 people and wounding 89 others, Ukrainian officials said.

Rail services and partial road traffic meanwhile resumed a day after a powerful blast damaged a bridge linking Russia to Crimea that is a key supply route to Moscow’s forces battling in southern Ukraine and an imposing symbol of its annexation of the peninsula.

Saturday’s explosion on the bridge over the Kerch Strait prompted gleeful messages from Ukrainian officials but no claim of responsibility. Russia did not immediately assign blame for the blast, which images showed blew away half of a section of the bridge’s roadway, with the other half still attached.

The pre-dawn strikes on Zaporizhzhia on Sunday were the second such attack against the city in three days.

At least 13 people were killed and 89 others were wounded, 60 of whom were hospitalized, Ukrainian officials said. The wounded included 11 children.

Ukrainian President Volodymyr Zelenskiy condemned the attack as “absolute evil” by people he called “savages and terrorists,” vowing those responsible would be brought to justice.

Zaporizhzhia city, about 52 km from a Russian-held nuclear power plant, has been under frequent shelling in recent weeks, with 19 people killed on Thursday.

Emergency workers and firefighters cordoned off the nine-story building and dug for survivors and casualties in the smoldering rubble of a massive central section that had collapsed.

Most of the Zaporizhzhia region, including the nuclear plant, have been under Russian control since the early days of Russia’s invasion in February. The capital of the region, Zaporizhzhia city, remains under Ukrainian control.

The White House declined direct comment on the explosion that damaged the Crimea Bridge on Sunday but said the United States would continue to arm Ukraine.

“We don’t really have anything more to add to the reports about the explosion on the bridge,” White House national security spokesman John Kirby told ABC’s “This Week” program.

“The situation is manageable – it’s unpleasant, but not fatal,” Crimea’s Russian governor, Sergei Aksyonov, told reporters. “Of course, emotions have been triggered and there is a healthy desire to seek revenge.”

Russia’s transport ministry said freight trains and long-distance passenger trains across the bridge were running according to schedule on Sunday. Limited road traffic resumed on Saturday around 10 hours after the blast.

“Only passenger cars will use the road section of the Crimean bridge until a special order is issued. The railway line will operate as normal. Buses of all types and heavy vehicles will be transported by ferry,” Aksyonov wrote on the Telegram messaging app.

It was not yet clear if Saturday’s blast was a deliberate attack, but the damage to such a high-profile structure came amid battlefield defeats for Russia, and could further cloud Kremlin reassurances that the conflict is going to plan.

Ukraine has recaptured more than 1,170 square kilometres of land in its southern Kherson region since launching the start of its counterattack against Russia in late August, a military spokesperson said on Sunday.

Ukraine achieved lightning success with its offensive in the north-east, but its drive in the south to wipe out a Russian foothold on the west bank of the vast Dnipro river has been less rapid.

Aksyonov has said Crimea had a month’s worth of fuel and more than two months’ worth of food. Russia’s defense ministry said on Saturday its forces in southern Ukraine could be “fully supplied” through existing land and sea routes.

Russia seized Crimea from Ukraine in 2014 and the 19-km bridge linking the region to its transport network was opened with great fanfare four years later by President Vladimir Putin.

Kyiv demands that Russian forces leave the Black Sea peninsula, as well as Ukrainian territory they have seized in the invasion Putin launched in February.

The bridge is a major artery for Russian forces in southern Ukraine and for the port of Sevastopol, where the Russian Black Sea fleet is based.

Russia’s federal anti-terrorism agency said on Saturday that a freight truck blew up on the bridge’s roadway. It said two spans of road bridge had partially collapsed, but that the arch spanning the channel through which ships travel between the Black Sea and Azov Sea was not damaged.