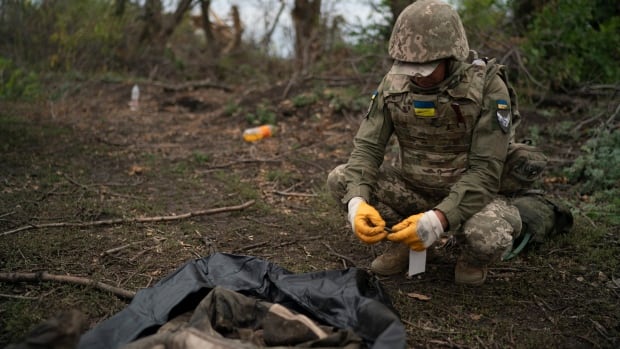 Russia has widened its strikes on Ukrainian civilian infrastructure in the past week following setbacks on the battlefield and is likely to expand its target range further, Britain said on Sunday, as a Russian music icon launched a fresh critique of the war.

Ukrainians who returned to the northeastern area retaken in Kyiv’s lightning advance earlier this month were searching for their dead while Russian artillery and air strikes kept pounding targets across Ukraine’s east.

Five civilians were killed in Russian attacks in the eastern Donetsk region over the past day and in Nikopol, further west, several dozen residential buildings, gas pipelines and power lines were hit, regional governors said on Sunday.

Britain’s defence ministry said Russian strikes at civilian infrastructure, including a power grid and a dam, have intensified over the past seven days.

“As it faces setbacks on the front lines, Russia has likely extended the locations it is prepared to strike in an attempt to directly undermine the morale of the Ukrainian people and government,” it said in a intelligence update.

Latest Defence Intelligence update on the situation in Ukraine – 18 September 2022<br> <br>Find out more about the UK government’s response: <a href=” <a href=” 🇺🇦 <a href=”https://t.co/j7bINlhTKp”>pic.twitter.com/j7bINlhTKp</a>

The U.K’s latest assessment comes as Alla Pugacheva, the queen of Soviet pop music, on Sunday denounced President Vladimir Putin’s war in Ukraine which she said was killing soldiers for illusory aims, burdening ordinary people and turning Russia into a global pariah.

Since the Feb. 24 invasion, Russia has cracked down on dissent, with fines for artists who make anti-war comments. State TV casts critics as traitors to the motherland.

Pugacheva, 73, a Soviet and then post-Soviet icon who is probably Russia’s most famous woman, requested Russia also class her as a “foreign agent” after her husband, 46-year-old TV comedian Maxim Galkin, was on Sept. 16 included on the state’s list.

“I ask you to include me among the ranks of foreign agents of my beloved country because I am in solidarity with my husband,” Pugacheva said on Instagram which is banned in Russia.

Pugacheva said her husband was a patriot who wanted a prosperous country with peace, freedom and an “end to the death of our boys for illusory aims.”

Such penetrating criticism from one of Russia’s most famous people — known across generations for hits such as the 1982 song Million Scarlet Roses and the 1978 film The Woman who Sings — is rare, and potentially dangerous, in modern Russia.

It also indicates the level of concern within the broader Russian elite about the war.

On Saturday, Ukrainian President Volodymyr Zelenskyy said in a video address that authorities had found a mass grave containing the bodies of 17 soldiers in Izium, some of which he said bore signs of torture.

Residents of Izium have been searching for dead relatives at a forest grave site where emergency workers began exhuming bodies last week. The causes of death for those at the grave site have not yet been established, although residents say some died in an air strike.

WARNING: This story contains distressing details. Ukraine has exhumed more than 400 bodies at a mass burial site in the reclaimed city of Izyum. The bodies are those of soldiers, civilians and children, with some showing signs of torture.

Ukrainian officials said last week they had found 440 bodies in the woodlands near Izium. They said most of the dead were civilians and the causes of death had not been established.

The Kremlin has not commented on the discovery of the graves, but in the past Moscow has repeatedly denied deliberately attacking civilians or committing atrocities.

Making his way between graves and trees at the forest site where exhumations were underway, Volodymyr Kolesnyk was trying to match numbers written on wooden crosses with names on a neatly handwritten list to locate relatives who he said died in an air strike in the early days of the war. Kolesnyk said he got the list from a local funeral company that dug the graves.

“They buried the bodies in bags, without coffins, without anything. I was not allowed here at first. They [Russians] said it was mined and asked to wait,” he told Reuters on Saturday.

Oleksandr Ilienkov, the chief of the prosecutor’s office for the Kharkiv region, told Reuters at the site on Friday: “One of the bodies (found) has evidence of a ligature pattern and a rope around the neck, tied hands,” adding that there were signs of violent death causes for other bodies but they would undergo forensic examination.

Izium’s mayor said on Sunday that work at the site would continue for another two weeks.

“The exhumation is underway, the graves are being dug up and all the remains are being transported to Kharkiv,” Valery Marchenko told state television.

In the village of Kozacha Lopan, some 45 km north of Kharkiv and just five kilometres from the Russian border, a Reuters reporter was taken to a squalid cellar with rooms fitted with iron bars, which local officials said had served as a makeshift prison during the occupation. Local district mayor Vyacheslav Zadorenko said the rooms had been used as a “torture cellar” to detain civilians. Reuters was unable to verify those accounts.

Elsewhere in the region, residents of towns recaptured after six months of Russian occupation, were returning with a mixture of joy and trepidation.

David Scheffer, a former diplomat who served as the first United States Ambassador-at-Large for War Crimes Issues, discusses the mass grave site found in Ukraine and what the discovery might mean for the ongoing investigation into potential war crimes.

“I’ve still kept this feeling, that any moment a shell could explode or an airplane could fly over,” said Nataliia Yelistratova, who traveled with her husband and daughter 80 km on a train from Kharkiv to her hometown of Balakliia to find her apartment block intact, but scarred by shelling.

“I’m still scared to be here,” she said after discovering a piece of shrapnel in a wall.

Putin has not responded to the accusations, but on Friday, he brushed off Ukraine’s swift counteroffensive and that Moscow would respond more forcefully if its troops were put under further pressure.

Such repeated threats have raised concerns he could at some point turn to small nuclear weapons or chemical warfare.

U.S. President Joe Biden, asked what he would say to Putin if he was considering using such weapons, replied: “Don’t. Don’t. Don’t. It would change the face of war unlike anything since World War Two.” A clip of comment in an interview with CBS program 60 Minutes was released by CBS on Saturday.

Moscow and Kyiv have accused each other for shelling around the plant that has damaged buildings and disrupted power lines needed to keep it cooled and safe. The plant was reconnected with the Ukrainian electricity grid after one of its power lines has been repaired, the United Nations nuclear watchdog said on Saturday. It warned, however, the situation at the plant “remains precarious.”

During a visit to the U.K. on Sunday, Prime Minister Justin Trudeau said Ottawa remains “steadfast in its support of Ukraine” and would continue to provide aid to the country.

Trudeau, in London for the funeral of Queen Elizabeth, is scheduled to meet Ukraine’s Prime Minister Denys Shmyhal on Sunday evening.