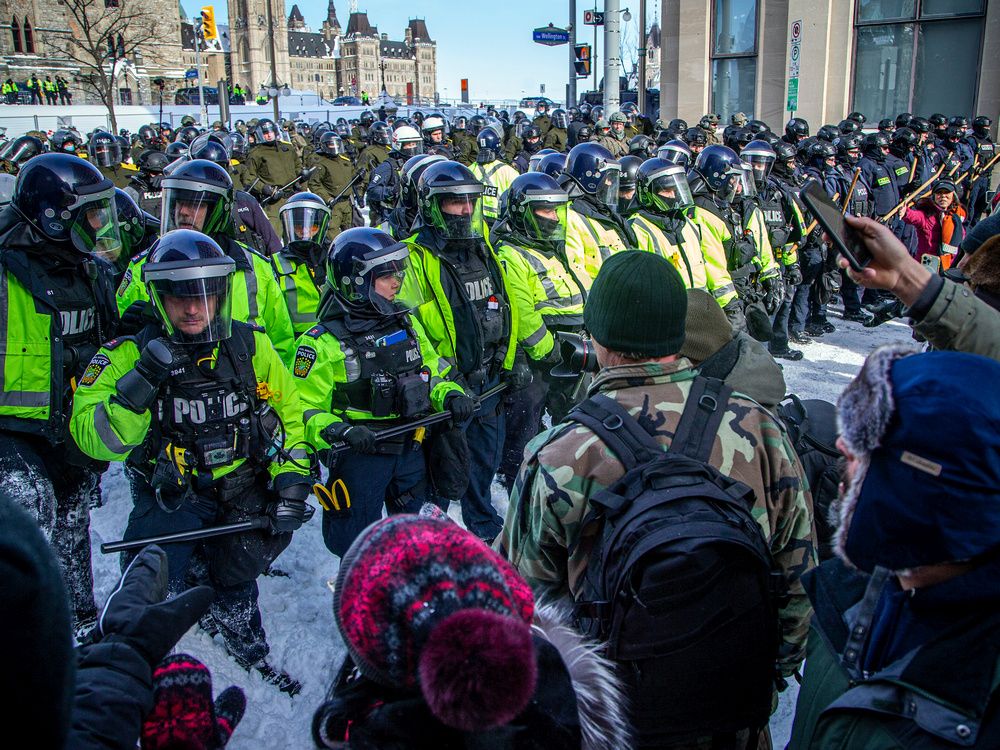 Standing on Wellington in Ottawa in front of the Parliament buildings, it’s hard to imagine that it’s the same place that was the epicentre of the freedom convoy.

Tourists are taking pictures of the eternal flame: a class of children is inside the fence around Parliament — closer than the protestors got — the kids scattered unevenly and sitting on the grass, being handed colouring books by a guide.

There are four kids bunched in front of the Terry Fox statue, being chided repeatedly by their mother to stand closer together for a photograph. They keep spontaneously separating again, almost instinctively seeking their own space.

Terry Fox isn’t wearing the baseball cap and Canadian flag cape that the convoy protestors put on him, and is no longer holding an anti-vax mandate sign tucked under his arm. “Closer!”, the woman says loudly. Obediently but briefly, they shuffle together.

Wellington is still blockaded with concrete blocks, with only limited traffic allowed. Walking the route where the protest was pushed back and dispersed, you can put your feet exactly where the riot squads formed up, where the mounted units pushed into the crowd in front of the Fairmont Chateau Laurier.

You can pass the War Memorial, where protesters urinated into the snow, you can stand for a moment where individual reporters and camera crews were harassed and attacked for simply doing their jobs.

It seems very, very far away: mobs of protesters have been replaced by office workers in sneakers, heading to lunch or back to work, by lawyers talking on cellphone headsets, by a woman stopping and scooping the leavings of her small leashed dog.

Next to the prime minister’s office, parked in a tow-away zone at the top of Metcalf Street, one lone convoy car — a charcoal Honda Civic bedecked with slogans and torn, faded flags — has drawn the attention of the Ottawa police.

Eventually, a small woman dressed in black gets out and hangs a small red gas can on the driver’s side mirror, all of it more like an art installation than a protest.

Two Ottawa police officers stand across the street with their thumbs hooked into their protective vests, watching. They walk away to get coffee, come back again.

A man pulls a wagon full of protest display gear, with a small dog on a leash. He knows the driver of the protest car: he sits on a concrete step and loudly announces into a flip phone that Ottawa bylaw officers have violated his constitutional rights by seizing parts of his display.

Tourists stream by: a busload of walking Asian tourists give the car no attention whatsoever, while individual walkers occasionally editorialize: “It’s over, dude.” “Go home already.”

A third police car drives by, its driver calling something to the protestor on the phone: the protestor shouts back an obscenity. “Same cop that hassled me before,” he yells into his phone. “Same one.”

Nearby, an inquiry is going on into the use of the federal Emergencies Act to halt the February convoy protest. Ontario’s premier has gone to the courts to try to keep from being called as a witness. And a variety of police services are looking downright foolish for their poor handling of the event.

Are the issues that caused the convoy still there, bubbling under the surface? Are there still Canadians who feel unheard and unrepresented? Certainly there are.

Are there also people for whom the threatening nature of the convoy has left a permanent mark? Some people I work with in Ottawa can’t help but tell me about how threatened they felt by the convoy every time I see them.

But on the ground in Ottawa, the convoy has gone from a menace to a side-street sideshow.

That happens. Sometimes, that reverses as well.

But, for now, it’s no different than the two nearby members of a religious group, trying to hand out flyers that everyone is avoiding taking.

Russell Wangersky is the editor in chief of the Regina Leader-Post and the Saskatoon StarPhoenix. He can be reached at [email protected]