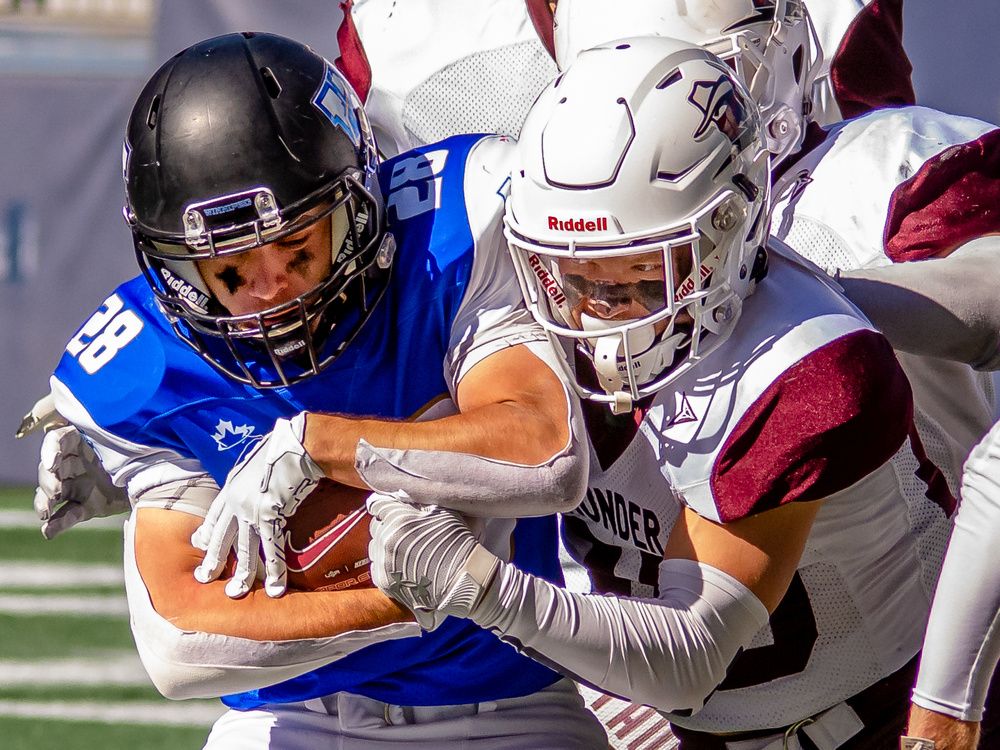 • The Regina Thunder will have to win another championship or three before being mentioned in the same light as their forerunner on the local junior football scene, the Regina Rams. However, the Scott MacAulay-coached Thunder is trending nicely in that direction, having won 19 consecutive PFC regular-season games. And, at 7-0, they are poised to post a perfect regular-season record for the second year in a row. Such feats were once synonymous with the Rams under head coaches Gordon Currie, Jerry Zbytnuik and Frank McCrystal.

• Of course, the brakes should be applied until the Thunder can capture a league title for the second time. Nine years have elapsed since MacAulay capped his first season as the head coach by guiding the team to PFC and CJFL championships. Since that time, the Saskatoon Hilltops have enjoyed a virtual stranglehold on both crowns. Saskatoon, remember, avenged two regular-season losses to Regina in 2021 by defeating the Thunder 29-9 in the PFC final. But this year does have a different vibe, especially when you consider that the Hilltops have lost (gasp!) three games for the first time since 1993. Never count out Saskatoon, but the Thunder should soon be presented with a delicious opportunity to make local sporting history — just like the Rams used to do.

• Fast fact: Thunder players are 1-2-3 in the PFC in receiving yardage, with the separation between first and third being less than a first down. Rylan Sokul leads the way with 582, followed by Isaac Foord (574) and Isaiah Woodley (573). Sokul paced the loop in catches (38) and receiving yardage (621) last year en route to being named the PFC’s outstanding offensive player.

• The Rams, a university team since 1999, could fail to register another first down this season and Mark McConkey would still be favoured to win Canada West coach-of-the-year honours. McConkey has taken a team that went 1-5 last season and transformed it into a 4-1 force that has already clinched a playoff spot.

• The Rams have enjoyed an exponential improvement even though their projected starting quarterback, Josh Donnelly, has yet to play a down this season due to concussion-related issues. Noah Pelletier had not thrown a single pass in the Canada West ranks until this year’s regular-season opener. It really is quite the story.

• Next up for the Rams is an Oct. 15 showdown with the University of Saskatchewan Huskies, whose closest call to date was an 11-10 victory over the U of R at Mosaic Stadium on Sept. 17. The Huskies prevailed even though their formidable offence, piloted by Hec Crighton Trophy candidate Mason Nyhus, was held without a touchdown.

• Here’s the first of today’s two shout-outs to RMF executive director Len Antonini, who continues to tirelessly devote his time to making our sporting community a better place. Len routinely scours the stands at Leibel Field, selling 50-50 tickets. Please remind me to bring my wallet on Saturday, when four RMF pee wee playoff games are to be held. (Note to self: Nobody likes a cheapo sports columnist.)

• Player to watch: Marcus Adams, a game-breaking tailback with RMF’s pee wee Mustangs. His father, also named Marcus, was a Roughriders defensive lineman from 2003 to 2010.

• While saluting football in its various forms, due recognition must be given to the stars of the high school ranks. It was a great pleasure earlier this week to meet the Balfour Bears’ Reid Massier, who amassed 358 all-purpose yards in a 26-22 Regina Intercollegiate Football League victory over the Thom Trojans on Sept. 30. Massier scored on both of his receptions, from 93 and 45 yards, and that was just part of his evening.

• Not to be outdone, Owen Mazur amassed 381 yards to help the LeBoldus Golden Suns defeat the Winston Knoll Wolverines 38-21 on Sept. 30. Mazur’s shortest touchdown: 55 yards. His other TD run covered 57 yards. Oh, and he also scored on a 101-yard reception. Six days later, he ran for two touchdowns (scoring from 44 and 14 yards) in addition to catching a 25-yard TD pass and returning a kickoff 92 yards for a major in a 55-21 victory over the Campbell Tartans. All-purpose yardage: 258.