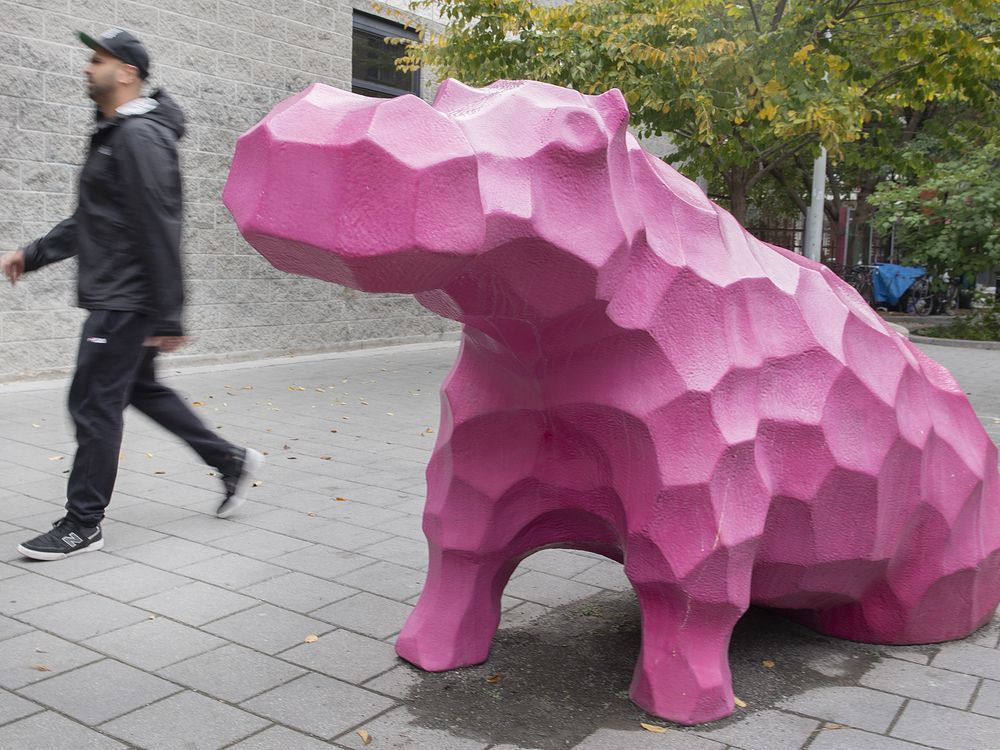 Long before the Plateau-Mont-Royal became one of Montreal’s trendiest neighbourhoods, the area was home to a 19th-century botanical garden and zoo where Montrealers marvelled at the sight of hippopotamuses, acrobatic circus acts and a live whale in a tank.

This piece of history has resurfaced in recent weeks thanks to an archeological dig that unearthed what is believed to be part of a fountain marking the former site’s entrance.

Jonathan Choronzey, an archeologist with the firm Ethnoscop, said the fountain was discovered during roadwork taking place on Pine Ave.

“I don’t know if there’s a tourist attraction today that would compare,” Choronzey said in a phone interview. “It was as much English as French, rich and poor who could go there to admire the exotic animals and the shows.”

Historical records suggest the fountain base was part of one of the city’s first botanical gardens, which was founded by Joseph-Edouard Guilbault in the 19th century.

Choronzey said Guilbault was originally a horticulturalist who moved his garden several times before landing near what’s now Pine Ave., around 1860. At the time, the area was still largely rural, which gave him plenty of space to expand and include an exotic animal menagerie and space to host travelling circuses.

Justin Ber, a board member of the historical society for the Plateau-Mont-Royal neighbourhood, said Guilbault started out selling exotic plants to the rich but soon branched out to other forms of entertainment.

A poster from 1862 advertised the arrival of the Hippozoonomadon circus, featuring the “largest elephants the world,” a hippopotamus, as well as horse riding and comedy shows.

The Montreal Herald, meanwhile, provided a glowing account of a tightrope walker named Farini, whose high-flying antics were so daring that “not a few of those who silently watched him appeared awestruck at his temerity,” the reporter wrote in 1864.

Newspaper accounts from the day suggested the entrepreneurial Guilbault even hired someone to capture a white whale — probably a beluga — which he planned to transport to the zoo site in a tank by train.

“The monster is, we are told, as large as any one has ever attempted to transfer from one place to another,” read a Montreal Herald article from May 1863. The 19-foot animal was “larger than the one exhibited by Barnum, and by which he realized such immense profit,” the article continued, in reference to P.T. Barnum, founder of the American travelling show Barnum & Bailey Circus.

The garden on the outskirts of the city included green space in the summer, an indoor skating rink in the winter and the travelling circuses. Other historical sources reference a circus school, as well as picnics, balls and theatre shows.

Bernard Vallée, a historical tour guide who has studied the gardens, described Guilbault as a “Canadian Barnum” who understood people’s need to escape their tough lives.

“There was a visionary side to this entrepreneur who saw that citizens in a growing city need hobbies, need nature and, as neighbourhoods develop and a certain urban misery exists, they need an escape,” he said.

Choronzey said that so far, the fountain is the only item that has been brought up during the dig that can be definitively linked to Guilbault Gardens.

Other than a nearby public square named after the founder, which features diving pink hippopotamus sculptures, there is little trace of what was once one of the city’s first great amusement parks.

However, Choronzey said the dig has also brought up items typical of Victorian life, including dishware, home foundations and old latrines. He said there is still plenty to discover under Montreal’s streets, including traces of ancient Indigenous inhabitation, the French regime or Victorian life — depending on the area.

“There are always quite a few surprises hidden under our feet,” he said.