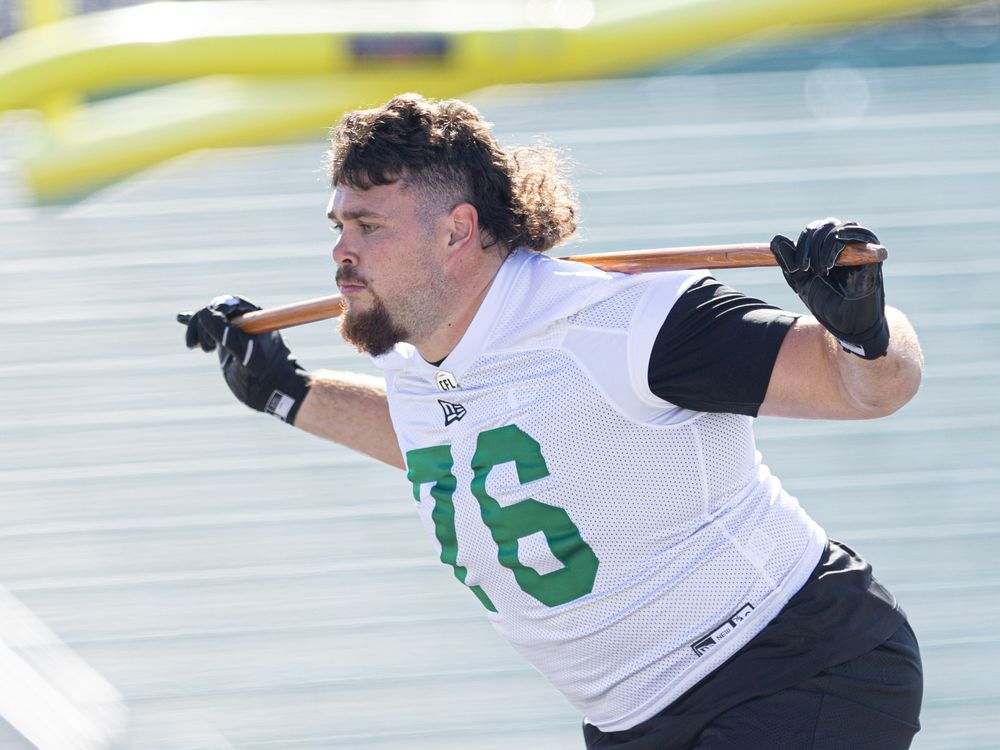 Kooper Richardson has settled in at right offensive tackle with the Saskatchewan Roughriders.

“I’m loving it,” Richardson said after Wednesday’s closed practice at Mosaic Stadium. “I’m having a blast and I’m loving it up here. I can’t think of a better place to play and I love the group of guys. I’m very lucky,”

Kooper, who hails from Folsom, Ca., was activated for the Riders’ 54-20 loss to the Winnipeg Blue Bombers on Sept. 10. He was in the same position when the Riders surrendered eight sacks in a 26-24 loss to the Edmonton Elks on Sept. 16.

He was the starting right tackle in Friday’s 31-13 loss to the host Blue Bombers. The beleaguered offensive line played better than it has during the team’s four-game losing streak.

Richardson feels the improvement was due to the returns of centre Dan Clark (ankle), left tackle Terran Vaughn (shoulder) and guard Logan Ferland (back) from injury.

“Just having everyone back has been great,” said Richardson, who is expected to start in Friday’s game against the host Hamilton Tiger-Cats. “Having everyone working and coming together has been a big piece for us.”

Richardson bided his time while waiting for an opportunity to contribute. He spent 12 games on the practice roster before getting his first CFL start against the Blue Bombers on Sept. 10.

“I think everyone can use extra time to develop and I was able to use it to my advantage,” said Richardson, 24.

Richardson, 6-foot-5 and 295 pounds, used his time in the practice roster to add a few more pounds and increase his strength.

“I feel like my strength has definitely improved along with my speed,” Richardson said.

Richardson feels that the Riders’ offensive line has remained close despite its struggles this season. The Riders have allowed a league-high 59 sacks this season while dealing with injuries and performance issues.

“It’s something when you can just lean on each other,” Richardson said. “It’s a great group and I can’t imagine being in a better place.”

Dickenson confirmed Wednesday that Shaq Cooper will start at tailback against the Tiger-Cats.

Cooper has been activated due to injuries to Jamal Morrow (hand), Frankie Hickson (wrist) and Kienan LaFrance (knee).

“I just want (Cooper) to take good care of the football, do a good job of pass protection and run like he’s capable of,” Dickenson said. “He’s still in pretty good shape and he looks like he’s ready to go.”

Cooper was initially released by the Riders after training camp as they went Morrow and Hickson.

Cooper re-signed on July 17, but was released on Aug. 10 after appearing in one game — a 32-17 loss to the visiting B.C. Lions on July 29. Cooper had one tackle on a kickoff return in the Riders’ loss. He was re-signed prior to Friday’s game against the Blue Bombers.

Returner Mario Alford is expected to serve as Cooper’s backup. Alford has recovered from an ankle injury that he suffered in Friday’s loss to the Blue Bombers.

“His ankle was enough to keep him out of (Monday’s practice), but he’s pushing through it and I think that he’ll be all right,” Dickenson said.

The Riders will be without slotback Duke Williams (ankle) and defensive tackle Anthony Lanier II (concussion). Williams and Lanier have been sidelined for the last five games by their respective injuries.