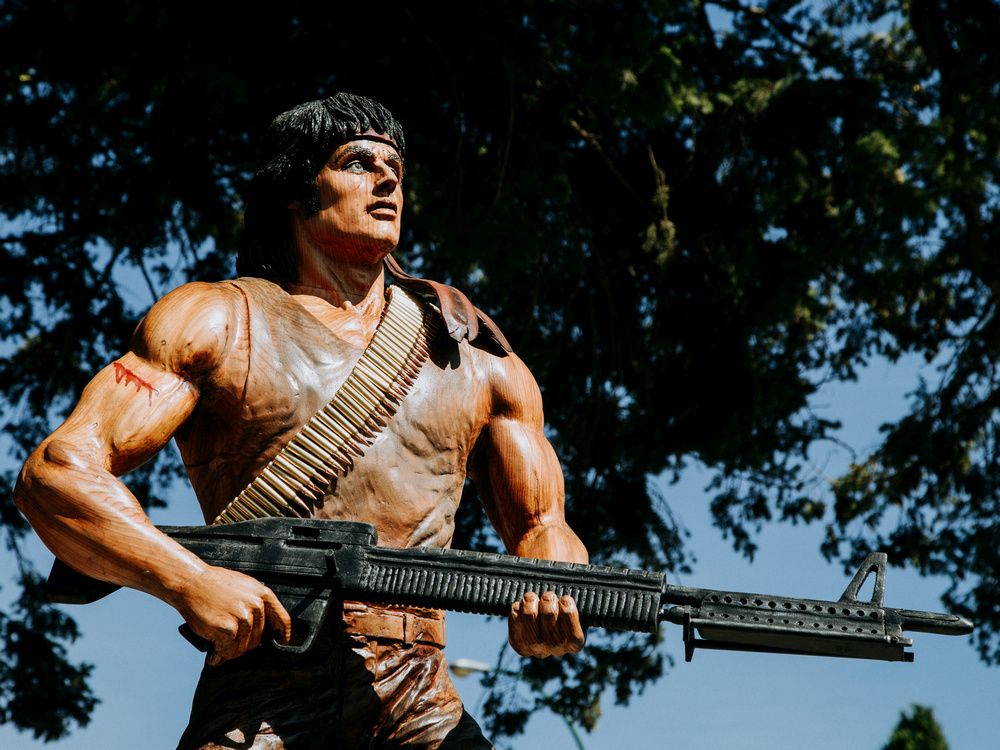 Rambo-mania has taken over the B.C. community of Hope, which is celebrating the 40th anniversary of the first Rambo movie, First Blood.

The film became a Hollywood blockbuster and spawned a franchise, including four sequels, an animated television series, and a comic book series.

It shot in and around Hope, the setting for the fictional town of Hope, Wash. and released in 1982. Forty years later, thousands of Rambo fans are flocking to town to get their fix.

“It’s crazy,” said organizer Brian McKinney with Tourism Hope Cacades and Canyons. “We are flooded by First Blood fans from literally all four corners of the planet. They’ve come here from England, Tokyo, Germany, California, from coast to coast.”

The weekend is likely going to be the busiest for tourism for Hope, a small town of 6,700 in the Fraser Canyon, said McKinney, who estimates up to 3,000 will participate in the four-day festivities.

Hope’s visitor centre gets about 15,000 inquiries a year on anything to do with First Blood.

The Othello Tunnels, a popular locale for a Rambo pilgrimage where many of the film’s action sequences were shot, remain off-limits due to damage sustained from last year’s storm. But there’s still plenty of locations in town to please avid Rambo fans.

There’s about 11 locations in the downtown core that “haven’t changed a bit,” McKinney said, reeling off a list that includes 3 Avenue, Water Avenue, and Wallace Street. “It’s pretty much the same exact view to the lens in 2022 as it was to a camera lens in 1981.”

In a video message to fans actor Sylvester Stallone, who played the iconic role of Vietnam vet John Rambo, thanked fans for “carrying the torch.”

“The memory and magic that happened in Hope still burns brightly in my mind and the fact you all still celebrate this miraculous movie,” which no one expected to be big,” he said.

“It’s humble, heartfelt affection I have for you all. Keep fighting the good fight.”

McKinney was 13 when First Blood was filmed in Hope in November and December 1981. At the time, Hollywood North was in its infancy, and to a young boy, watching the making of the movie was a dream.

“It was a cool, cool place to be,” he said. “What’s not cool about seeing a bunch of buildings blow up, motorcycle chases, and stunt car chases?”

Since its release, the movie has established a cult-like following, and the legions of fans, it seems to McKinney, are growing and only getting younger.

The town celebrated the film’s 25th anniversary and threw similar celebrations for the 30th and 35th anniversaries due to popular demand. This year they’ve pulled out the stops.

The weekend’s events include a ceremony Saturday for the late Brian Dennehy, the actor who played Sheriff Will Teasle, which his family from the U.S. will attend.

A screening of the film will be held Saturday night at the historic Hope Cinema, and there will be autograph signings on Saturday and Sunday with Patrick Stack, who played the role of Lt. Clinton Morgan, who led the search for Rambo, and Stephan Chang, who played a Viet Kong commander.

And of course, a Rambo weekend wouldn’t be complete, said McKinney, without a 52-tonne tank driving over parked cars on Wallace Street in downtown Hope from 10 a.m. to 1 p.m. on Sunday.