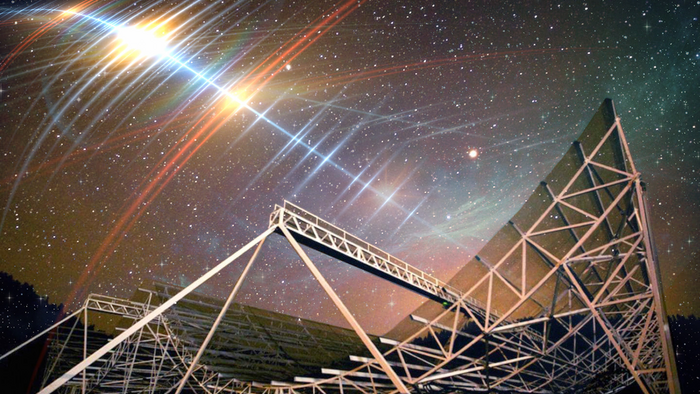 A signal consisting of fast bursts of radio waves in a clear pattern has been detected emanating from deep space — and astronomers believe it could be used to measure the expansion of the universe in the future.


This radio “heartbeat,” detected by a special radio telescope in British Columbia, is described in a new paper published Wednesday in the journal Nature, which explains that this phenomenon is called a fast radio burst (FRBs).


FRBs are sudden bursts of strong, consistent radio waves from space that have no clear source but are detectable across huge distances.


One of the things that makes this new signal stand out is that most FRBs last only a couple of milliseconds when they come to life. However, this new signal, labelled FRB 20191221A, can persist for up to three seconds at a time, during which, astronomers observed it emitting bursts of radio waves that repeated every 0.2 seconds in an obvious pattern.


It is the longest-lasting FRB to date, around 1,000 times longer than the average FRB.


“There are not many things in the universe that emit strictly periodic signals,” Daniele Michilli, a postdoc in MIT’s Kavli Institute for Astrophysics and Space Research and one of the study’s authors, said in a press release.


“Examples that we know of in our own galaxy are radio pulsars and magnetars, which rotate and produce a beamed emission similar to a lighthouse. And we think this new signal could be a magnetar or pulsar on steroids.”


This particular FRB was first detected in December of 2019. Back then, Michilli was a researcher at McGill University, scanning the incoming data of the Canadian Hydrogen Intensity Mapping Experiment (CHIME), a radio telescope in B.C. made up of four large reflectors.


He noticed immediately when CHIME picked up a new signal of a potential FRB.


“It was unusual,” he explained. “Not only was it very long, lasting about three seconds, but there were periodic peaks that were remarkably precise, emitting every fraction of a second — boom, boom, boom — like a heartbeat. This is the first time the signal itself is periodic.”


That day started the in-depth analysis that led to the paper released this week.


Michilli and a team of astronomers looked at the signal and found that it bore similarities to emissions from radio pulsars and magnetars — both specific types of neutron stars — within our own galaxy.


Their current theory is that this radio signal came from a distant radio pulsar or magnetar that normally releases less intense waves, and ejected this rare, huge burst of waves for an unknown reason in a three-second window that CHIME was able to catch.


“This detection raises the question of what could cause this extreme signal that we’ve never seen before, and how can we use this signal to study the universe,” Michilli says. “Future telescopes promise to discover thousands of FRBs a month, and at that point we may find many more of these periodic signals.”


If future bursts from FRB 20191221A can be caught by CHIME, it could help astronomers track the rate of the expansion of the universe, astronomers say.


CHIME’s unique configuration — unlike most telescopes, it does not move, and has a high mapping speed due to its large, consistent field of view — makes it optimal for discovering FRBs, along with observing hydrogen gas in distant galaxies. The extremely brief lifespan of an FRB means you have to be extremely lucky in pointing your telescope at the right part of the sky at the right time, unless you’re looking with CHIME.


The first FRB was detected in 2007. But in CHIME’s first year of operation after opening in 2018, it detected more than 500 new FRBs.


“CHIME has now detected many FRBs with different properties,” Michilli says. “We’ve seen some that live inside clouds that are very turbulent, while others look like they’re in clean environments. From the properties of this new signal, we can say that around this source, there’s a cloud of plasma that must be extremely turbulent.”


By mid-2020, CHIME had detected more than 1,000 FRBs. Scientists hope that soon, we’ll be able to pinpoint not only where each one comes from, but all that these deep space flashes can tell us about the universe.