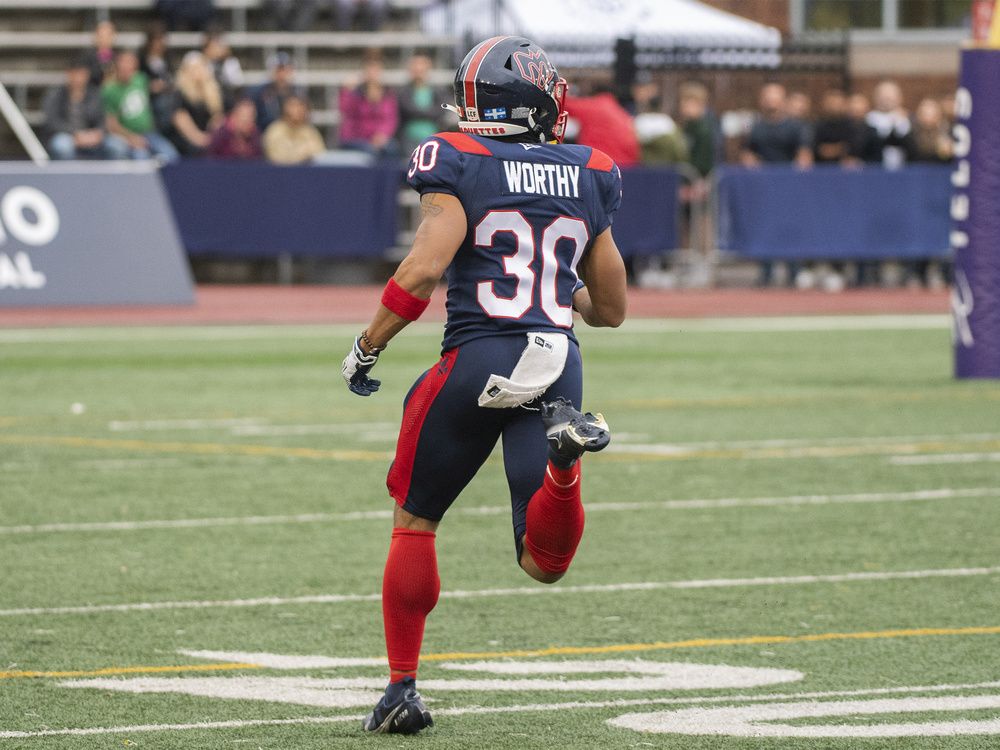 If Trevor Harris solidified his spot as the Alouettes’ starting quarterback, the team also discovered a new return-specialist in Chandler Worthy.

The veteran Harris, making his first start of the season ahead of Vernon Adams Jr., passed for one touchdown in Montreal’s convincing 37-13 victory over the Saskatchewan Roughriders Thursday night in the team’s regular-season home debut at Molson Stadium before 16,027 spectators.

Worthy, replacing the injured Mario Alford, returned the opening kickoff 88 yards for a touchdown and was effective on punt returns as well. Safety Marc-Antoine Dequoy returned an interception 21 yards for another score while David Côté kicked five field goals.

Brett Lauther kicked a pair of field goals for Saskatchewan before Duke Williams scored a late touchdown on a five-yard pass. It was the Als’ first win of the season following two narrow defeats. Saskatchewan is now 2-1.

It’s always a good sign when your team’s leading before the offence takes the field. And that was the case after Worthy took the opening kickoff, made a move to his right, cut back to the left sideline and returned the opening kickoff for the electrifying run after only 15 seconds.

It was the longest kickoff return for a score in team history since B.L. Thompson’s 106-yarder against Ottawa in October 1962.

The Als increased their lead to 10-0 on Côté’s first field goal, from 21 yards, at 7:56. Coincidentally, that was the distance from which Côté missed a potential game-winning field goal last week, at Toronto. He increased the lead to 13-0 with a 48-yarder at 11:39 of the opening quarter.

Worthy set things up with a 24-yard punt return.

The Riders cut into the lead with Lauther’s 41-yard field goal on the opening play of the second quarter, but Saskatchewan undoubtedly believed it would come away with more than three points after it drove to the Montreal 23-yard line. But following an incomplete pass, quarterback Cody Fajardo was hit for a 12-yard loss by Michael Wakefield.

But the Als responded on the next play, Harris connecting with Kaion Julien-Grant for the long pass-and-run touchdown. The Canadian receiver beat cornerback Nelson Lokombo on the play, providing the Als with a 20-3 lead and taking the momentum away from the visitors.

The Als engineered a 10-play, 68-yard drive midway through the quarter and drove to the Saskatchewan 6, only to settle for Côté’s 16-yard field goal. Nonetheless, Montreal went to its dressing room at halftime nursing a healthy 23-3 lead.

The Riders began the second half in impressive fashion, engineering a time-consuming 14-play, 54-yard drive that took eight minutes. But at the end of it all, Saskatchewan only had another field goal to show for its efforts — Lauther’s 20-yarder. And that wasn’t nearly enough.

The dagger came late in the quarter, when safety Dequoy intercepted a pass that deflected off Duke Williams and returned it to the end zone for his first professional touchdown and a commanding 30-6 lead.

Worthy returned a punt 73 yards for a touchdown late in the quarter, although the play was nullified by a penalty. Jones challenged the play, but it was upheld following a video review.

Nonetheless, the Als weren’t deterred. Harris connected with Canadian rookie receiver Tyson Philpot on a 65-yard play. But Montreal was unable to finish the drive and settled for Côté’s fourth field goal, a 17-yarder, on the opening play of the fourth quarter.

Fajardo threw his second interception, this one pilfered by cornerback Mike Jones, before being replaced by backup Mason Fine midway through the period.

These two teams meet again one week from Saturday in Regina.