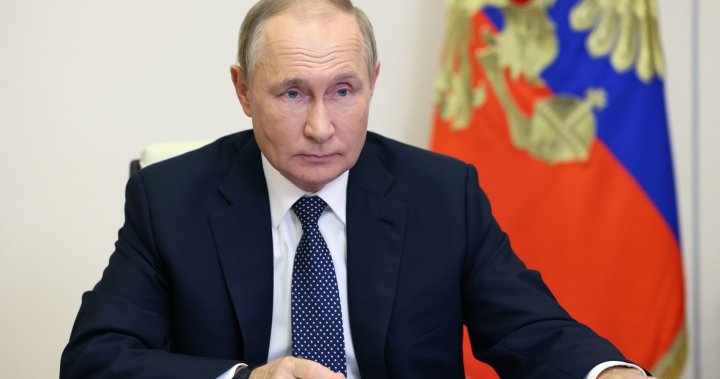 Ever since Russian President Vladimir Putin raised the possibility of using nuclear weapons to escalate the war in Ukraine, a major question has been how Western allies would respond if that threat was carried out.

But experts say that question is the wrong one to ask. Instead, they say the West must see Putin’s threat for what it likely is — an empty one — and continue to proactively push back on Russia economically while helping Ukraine win the war.

“Putin wants the threat to remain a threat because he wants to scare the Americans and the Ukrainians to the negotiating table,” said Andrew Rasiulis, a fellow at the Canadian Global Affairs Institute who spent decades with Canada’s Department of National Defence.

“He doesn’t want to actually use it … because he’s not suicidal.”

The threat of nuclear weapons being launched in Ukraine has been swirling around the war ever since it began in late February. Russia is home to the world’s largest stockpile of nuclear warheads, a fact Putin has repeatedly reminded the West of.

But concern has intensified as Russia’s military faces one setback after another, each of which has led the Kremlin to escalate its aggression. When Russian forces were pushed back from Kyiv in March, for example, Russia responded with increased missile and shell attacks on Ukrainian cities, killing thousands of civilians in an effort to diminish morale and force a surrender. The strategy didn’t work.

Last month, as Ukrainian forces successfully began retaking occupied territory in the east and south, Putin ordered a partial mobilization of up to 300,000 Russian reservists and declared plans to annex four regions of eastern Ukraine.

During his announcement, he said Russia would “use all means available to us” to defend itself if its territory is threatened, including “various weapons of destruction.”

Even though Putin didn’t explicitly mention the nuclear arsenal at his disposal, world leaders quickly filled in the blanks, condemning “nuclear threats” while warning of the consequences if a strike was launched.

On Thursday, U.S. President Joe Biden went even further, warning Putin was “not joking” and that the risk of nuclear “Armageddon” was the highest level since the Cuban Missile Crisis of 1962. The White House quickly walked back the comments, assuring they had no intelligence suggesting Russia was planning a nuclear attack in Ukraine.

Comments like these play right into Putin’s hands, said Aurel Braun, a political science professor at the University of Toronto, and threaten to legitimize Putin’s “scare” tactics.

“This is the wrong approach,” Braun said in an interview before Biden made his latest comments.

“Any nuclear threat needs to be taken seriously … but having done that, we also need to contextualize it. And we have to ask the right question: not ‘how will we react’ … but rather ‘how do we prevent this from happening?’”

As Putin ramps up nuclear threats, how world reacts to ‘sham’ referendums is key: Joly

Ukrainian President Volodymyr Zelenskyy has called on Biden and the West to impose more sanctions on the Kremlin and supply more weapons to Ukraine to help its forces on the battlefield. He has also warned against adopting a reactive posture.

“Waiting for the nuclear strikes first and then to say, ‘what’s going to happen to them?’ No,” he told the Sydney-based Lowy Institute in a speech through an interpreter on Thursday. “There is a need to review the way the pressure is being exerted.”

Braun agrees: “It’s not as if the West is helpless here. … But the more we talk about it, the more we allow this kind of blackmail to work.”

‘All sorts’ of damage Russia could do before going nuclear

On the slim chance even a small-scale, tactical nuclear strike were to be launched in Ukraine, Rasiulis says the U.S. and NATO would likely respond with a “conventional counterforce strike” against the Russians, echoing similar comments made by former CIA director David Petraeus last week.

“They would still avoid going nuclear … but would (bomb) everything they can see, including the Black Sea fleet,” he said.

Russia also has those conventional forces like B-52 bombers, he adds, meaning such a campaign by the West would also spark a response in kind — which could barrel toward nuclear warfare.

Because Putin wants to avoid that outcome, Rasiulis says the Russian president’s “various weapons of destruction” comment likely means unleashing his military’s own force of conventional bombers on the front lines, a move he has yet to take.

“The conventional bomb is not linked to mutually assured destruction. You cannot destroy the world with conventional weapons,” he said.

A devastating bombing campaign could serve to appease the nationalist hawks within Putin’s inner circle calling for Ukraine’s destruction by any means necessary.

“Putin right now is stuck between some (advisors) who are basically saying, ‘let’s cut our losses and get out of this,’ versus the others, like Chechen Leader Ramzan Kadyrov, who are literally calling for tactical nuclear weapons,” said Marcus Kolga, a senior fellow at the Macdonald-Laurier Institute and study of Russia.

“I’m sure it’s not very comfortable for him because his objective is to stay in power as long as possible. And neither of those choices are really attractive if that’s his objective.”

Those two arguments have also played out on Russian state TV, where pundits sway between lamenting the mounting military defeats and fantasizing about Ukrainian cities being wiped off the map.

Some have even threatened the West with nuclear attacks if Russia is pushed “into a corner,” which they insisted was the original intent of Putin’s warning last month.

There was palpable frustration in the Russian media that many in the West misunderstood what Putin said⁠—he was threatening the West, not Ukraine, with nuclear strikes. And so, droves of propagandists have been sent out to tell the West: push us into a corner and everybody dies. pic.twitter.com/quXcMZd7SE

Kolga says until Putin is defeated, there are plenty of other moves for him to make that can prolong destruction and death in Ukraine, as well as damage Western infrastructure.

He pointed to the blasts that damaged the Nord Stream natural gas pipelines between Germany and Russia, which NATO allies have implicitly suggested was an act of sabotage by the Kremlin to escalate the energy crisis in Europe.

“Russia has been developing its undersea capabilities to cause destruction like that for quite some time,” he said, adding underwater communication cables could also be targeted.

“He can cause all sorts of additional destruction without going nuclear to try to pressure Western leaders to grant some concessions.”

Many European leaders have made clear that the only way the war will end is for Putin to admit defeat and pull out of Ukraine. That resolve, along with continuing to isolate Russia economically and financially, is the only way to deter Putin from doing the unthinkable, experts say.

“You can’t negotiate with an executioner,” Braun said. “The West needs to be proactive, not reactive.”