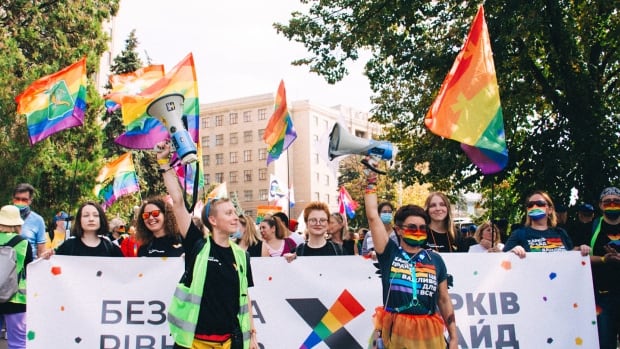 People in the LGBTQ community in Kharkiv, Ukraine’s second-largest city, have reasons to be hopeful

Over the next week, they’ll mark Pride — a time of celebration, mourning and soldiering forward in their own fight for equality — in the midst of war.

And while the city and surrounding areas have endured relentless assaults since the Russian invasion began in February, the Kremlin has now been forced to pull back from the region following an aggressive Ukrainian counter-offensive.

The danger from Russia isn’t over yet, but the team of people working to put on KharkivPride 2022 are pushing ahead with their plans, and they say a show of equality, diversity and unity is needed as much now as ever before.

“Pride is not a holiday,” said Ruslana Hnatchenko, a member of Sphere, a feminist lesbian organization which coordinates KharkivPride.

“Yes, it’s a celebration of identity and it’s pride in who we are but … [It’s] about struggle, [it’s] about resistance.”

Like other Ukrainians, LGBTQ people have stood up for their country, fought on the front lines, and many have been injured or killed in Russian attacks. But in a country that doesn’t allow same-sex marriage or recognize same-sex partner rights, some LGBTQ people are facing additional obstacles while living through the ongoing conflict.

“If queer Ukrainians can die for this country, they can also have equal rights in this country,” Hnatchenko told CBC News in an interview from Budapest, where she is a Master’s student.

This year’s Pride events, which began Saturday and culminate with a march on Sept. 25, will include a renewed call for marriage equality, something Hnatchenko says has become an even more important issue for the LGBTQ community since the war began.

Without it, she explained, LGBTQ people don’t have the right to see their loved one in hospital or to take care of personal affairs for their partners while they are away fighting the war.

According to KharkivPride, LGBTQ Ukrainians are also being prevented from making decisions about an injured partner’s health; caring for the children of a partner who is away fighting, or injured or killed in battle; and they don’t have the right to make funeral arrangements for a partner killed in action.

If a soldier dies, Ukraine’s Defence Ministry must inform a family member or spouse, but there is no obligation to contact a same-sex partner.

Last month, President Volodymyr Zelenskyy asked his government to examine the possibility of legalizing same-sex partnerships, but he said redefining marriage as something other than a union between a man and a woman is not something that would happen during the war.

In the middle of Kharkiv’s Pride week, there will be a memorial for LGBTQ lives lost in the war.

“It’s something for us to pay tribute to the LGBT people fallen during the war … because we all know that Russia doesn’t only threaten Ukraine as a state, but also specifically the vulnerable groups in Ukraine.”

KharkivPride will also be mourning one of its own volunteers who died in a March missile attack on the city centre, 21-year-old law student Elya Schemur. She was volunteering to organize humanitarian supplies at the time.

“[Schemur] was very close to us and she was at all of our Prides,” Hnatchenko said. “Because it happened so early in the war, it sort of was very telling for us of how close [the war] was and how, you know, how this war can take people who are very close to our organization.”

There are serious concerns about what a prolonged Russian occupation of Ukrainian territory could mean for queer and gender-diverse people.

Russia has strict legislation targeting the LGBTQ community, limiting what it calls the promotion of non-traditional sexual relationships to minors. Some Russian lawmakers have made efforts to further expand the country’s so-called “gay propaganda” law to essentially outlaw any discussions of sexual orientation and gender identity in the media or online.

This law is in force in Russian-annexed Crimea, and it “certainly doesn’t bode well” for LGBTQ people in Russian-occupied territories, warns Rachel Denber, Human Rights Watch’s deputy director for Europe and Central Asia

“Any kind of manifestation of non-conformism in these places makes you very vulnerable to harassment, violence [and] detention,” she said.

Russian President Vladimir Putin and members of his inner circle, including high-ranking people in the Russian Orthodox Church, have used LGBTQ rights and Pride celebrations as a “wedge” to mobilize “conservative and reactionary parts of Russian society, explained Denber.

“They like to argue that the West has stolen Ukraine’s identity from it and one of the symbols they like to use for that is, you know, LGBT issues.”

The truth about Kharkiv: Cracks in Putin’s propaganda machine

For the first six months, the Kremlin effectively controlled the message about Russia’s ‘military operation’ in Ukraine. But in the face of new facts on the ground, even Putin loyalists are having trouble following the party line, refusing to parrot propaganda that this week’s rout of Russian forces was a ‘pre-planned tactical withdrawal.’

KharkivPride’s organizers have helped unite and support the city’s LGBTQ people throughout the war.

“When the situation becomes hard, and there is, for example, heavy shelling of the city, we always ask each other to just drop a line in the group chat to let the rest know that everyone is OK,” wrote Anna Sharyhina, vice president and program director of Sphere, in an email from Kharkiv.

The NGO has also organized mental health support groups, as well as assistance for people affected by power and water outages following Russian assaults on infrastructure.

Hnatchenko thinks it all may be helping to break down some social barriers in Ukrainian society.

“The attitudes towards LGBT people have only improved during the war because of the sense of unity and belonging together,” she said.

“We’re all in this together. Everyone is fighting and everyone is resisting and hopefully persevering in the end.”