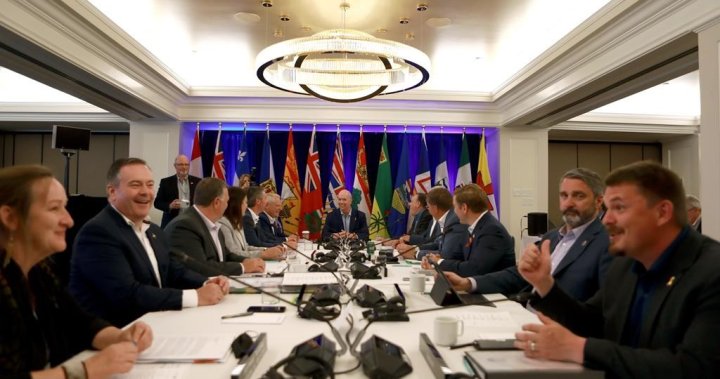 Canada’s premiers have wrapped a second day of meetings in British Columbia, but they failed to secure a meeting with the federal government to speak about provincial health care needs.

Quebec Premier François Legault called on Prime Minister Justin Trudeau to come to the table, instead of sending ministers to speak through the media, he said.

“We need to have a meeting,” Legault says. “It’s a real problem, it’s the most important problem in Canada; so I don’t understand why Mr. Trudeau doesn’t want to meet us.”

On Monday, the minister of intergovernmental affairs told CBC it would be “absurd” to increase federal health transfers.

Dominic Leblanc added Canada does not expect the money to be used to run up surpluses or send cheques to people on the eve of an election.

Leblanc’s comment didn’t sit well with the rest of the premiers either.

“There’s nobody here who is trying to scrimp on a healthcare budget and divert it somewhere else, that’s not happening,” said Nova Scotia Premier Tim Houston. “The only thing that’s stopping that progress on that is the federal government’s willingness to sit down and talk to us. That’s all we’re asking.”

Premiers met up in order to demand more money from Canada in health transfers.

They want an increase from 22 per cent to 35 per cent.

The premier blamed increasing costs in an ageing population and trying to keep up with emerging technologies.

Quebec vows to overhaul its beleaguered health-care system by 2025

While Legault says they have enough funding to execute the plan, they have an issue with sustaining it long term.

“Currently, Quebec has put in place the necessary gestures for our health care reform. We are able to finance it but there is a deficit in Quebec,” Legault told reporters in British Columbia.

“The problem we have is that Mr. Trudeau has given us non-recurrent money. We used a portion of that money to hire new nurses but if we want to pay these nurses long time, we need a partner.”

Legault says sitting down with the prime minister is essential to discuss those needs and the rest of the provinces.