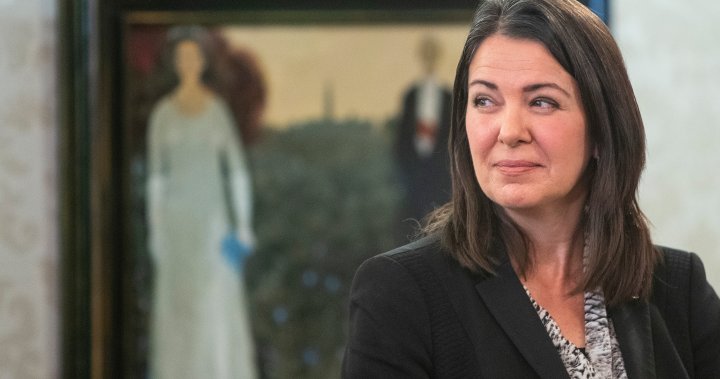 Premier Danielle Smith is asking Alberta ministers to “present a united front in all negotiations with the federal government.”

In a memo dated Oct. 27 with the subject line “Federal Engagement,” Smith said one of her priorities as premier is to “ensure Alberta’s freedoms and interests are protected from federal intrusions.”

She said Alberta may “seek to opt out” of federally funded programs if they don’t serve Albertans, put an unfair burden on the province or “undermine the constitutional responsibility of provinces in key areas such as resources development, health and social programs.”

Smith also said that Alberta is treated subordinately by Ottawa, “with unilateral federal decisions that land lock our resources, undermine our prosperity, and make life less affordable for Albertans.”

She said the UCP government will be discussing a “push back strategy” on major policy issues, like the federal emissions cap and the federal gun buyback program.

“The Alberta Sovereignty Act is a critical part of that strategy,” Smith said.

2:01Growing frustrations from premiers in prairies as they push for sovereignty


But in the meantime, she asked Alberta ministers to be united in their dealings with the federal government.

The premier said when dealing with the federal government, ministries should consider:
– Respecting the constitutional division of powers
– Equal orders of government (Alberta treated as equal and not as a stakeholder)
– Accountability to citizens
– Respecting jurisdictional diversity

In the letter, Smith added that Alberta will ask the federal government to provide “early open and transparent engagement with Alberta” on proposed policies, like national dental care.

Smith said the office of intergovernmental relations will coordinate ministries’ activities with the federal government.

A University of Alberta law professor said any province can decide not to participate in a federal program.

“That’s open to any province and Alberta can make that choice. Whether the public is interested in Alberta making those choices, that will be the kind of thing we see at election time.”

Adams said Smith and the Alberta UCP can certainly opt out of federal programs, but they can’t stop the federal government from spending money.

“The spending power is a constitutional reality that the courts have confirmed in our constitutional law that the federal government can spend its money — and it can even spend that money in areas outside its jurisdiction.

“It’s open to provinces to participate in those programs and to accept that funding or to reject it,” he said. “What I don’t think it’s very likely to ever accomplish is for a province to say: ‘We want the federal government to stop using its spending power,’ or two: ‘We want the federal government to simply hand over dollars, in effect, to provinces for us to decide how we want to spend it.’


Adams said provincial governments have been pushing for more autonomy in delivering federal programs and services for a long time.

“It’s just a question of how sharp the elbows are or whether they’re delivering those messages in public or at the negotiating table. That’s always part of the back and forth of a federation like this one.”

He also pointed out that provinces often claim they have exclusive jurisdiction over health care, which isn’t the case.

“That’s not actually what the constitution says and it’s certainly not what our courts have held in a number of cases. It’s a shared area of jurisdiction. Provincial jurisdiction over hospitals, yes, that’s outlined in the constitution, but health care generally is an area that both areas of government have some constitutional authority.”

Smith’s mention of the Alberta Sovereignty Act in the letter to ministers stood out to Adams.

“And it’s really gravitated to the centrepiece of her political identity. And there it is front and centre in this letter to her ministers — that the Sovereignty Act is part of this fight.

“I suspect that she’s had some feedback that, at least in her political constituency, this is a popular position and so she’s really doubled — maybe tripled — down on this idea.”

Smith’s letter “signals a childish approach to federal relations, one that will only result in stalled investment, increased bureaucracy, and economic disaster for our province,” NDP energy critic Kathleen Ganley said Thursday.

0:45Trudeau ‘looking forward’ to working with Alberta’s Danielle Smith on range of issues


Marie Renaud, NDP critic for community and social services, said this letter is combative, when instead Alberta should be trying to find common ground.

“We need mature, strategic, intelligent negotiation; not a temper tantrum,” she said.

“It worries me a great deal about what this provincial government will claw back under Danielle Smith.

“This UPC government does not have a positive history of working strategically with the federal government to benefit Albertans and this is one more example of it, and it seems to be escalating and getting worse.”

The Sovereignty Act, as originally proposed by Smith, would allow the province to refuse to follow federal laws and court rulings it deems to be not in Alberta’s best interests and an illegal intrusion into its duly delegated spheres of influence under the Constitution.

It was denounced by five of Smith’s six UCP leadership rivals, and by former premier Jason Kenney, as a profoundly illegal and dangerous plan doomed to ignite economic chaos as Albertans, investors and businesses wouldn’t know which laws they were to follow.

Our government will be holding our ground when federal policies threaten Alberta’s interests.
I have sent all Cabinet Ministers the memo below to ensure we are presenting a united front in all dealings with the federal government.#abpoli #cdnpoli pic.twitter.com/QKqmQ56kGi