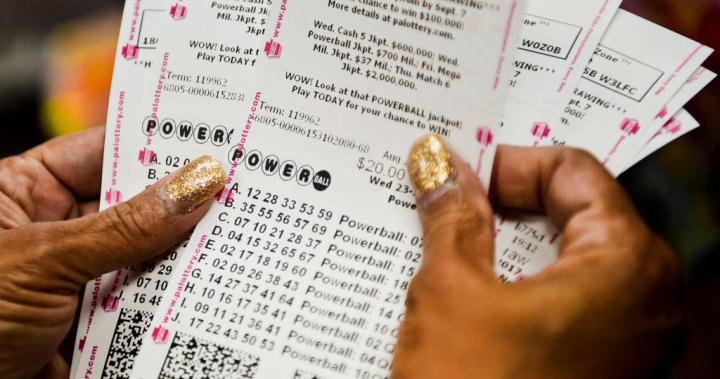 After three months and 36 consecutive drawings without a winner, the Powerball jackpot has swelled to an estimated US$800 million — the second-largest prize in Powerball’s history, according to a news release from the lottery.

The growing Powerball jackpot was even amassing headlines earlier this week after rising to $700 million, but since no one matched all six numbers during Wednesday night’s draw, it continues to rise.

‘This is incredible’: Milton, Ont. man wins two $1M prizes in just over a year

In a news release, Powerball said that its current prize of $800 million is the fifth-largest jackpot in U.S. lottery history. Powerball holds the world record for the largest jackpot ever after it paid out a grand prize of $1.586 billion in 2016.

The next Powerball drawing is on Saturday and the odds of winning the jackpot are 1 in 292.2 million, the lottery said.

Powerball winners have the option of claiming the full prize through an annuity, paid annually over 29 years, but most winners opt for the cash option paid out immediately. For the $800 million prize, the cash option stands at $383.7 million.

The dark side of winning the lottery: lucky ticket can cause new troubles, past winners say

Powerball players do not need to be U.S. citizens or residents to enter the lottery, meaning Canadians are more than welcome to throw their hats into the ring.

There are a number of techniques for Canadians to get U.S. lottery tickets but the simplest method is travelling across the border and buying one in the States yourself.

Canadians can also ask friends or family members in America to buy a ticket on their behalf — provided they trust them not to run off with the winnings!

Yes, Canadians can enter the US$1.1 billion Mega Millions lottery. Here’s how

If those two options are out of the question, there’s one more way Canadians can score a ticket.

There are a number of third-party services that will buy lottery tickets for a fee, and they’ve been shown to work in the past.

In 2015, a man from Iraq won $6.4 million from an Oregon lottery using an online agent, The Lotter.

This practice is typically not encouraged by lotteries who warn that using third-party sites can come with risks of scamming.

Lottery earnings in the U.S. are subject to a 30 per cent federal tax, but the Canadian government doesn’t additionally tax foreign lottery winnings.