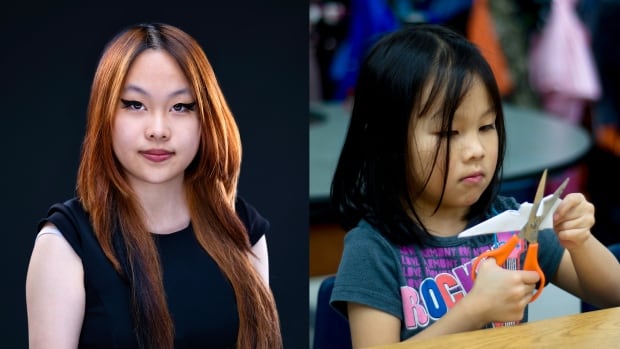 An end of year portrait project is giving a group of grads from Cameron Heights Collegiate Institute in Kitchener, Ont., a stronger sense of self as they set off into the next chapter of their lives.

The photos are side-by-side images: portraits taken in the last months of Grade 12 and ones taken a decade earlier when the students were in Grade 2.

It came together after teacher Conrad Stark learned that students in his Grade 12 photography class had been the subject of a field trip to an elementary school back in 2012.

At the time, he had taken another class of Grade 12 students to Williamsburg Public School to take photos of the students in his wife’s Grade 2 class.

“We went there — just for the day — just to teach my students about photojournalism, kind of working on-location photography,” he told CBC Kitchener-Waterloo.

“Jump ahead to this year, earlier in the year, I discovered some of students were actually in my Grade 12 photography class now,” he said.

“So it was really this full-circle moment that, very serendipitously, presented itself.”

Anne-Katherine Le, 17, doesn’t remember the photographers in her class, but she does remember the activity she was doing on the day the photos were taken — and the look of determination on her face as she makes a craft.

Many of the students enjoyed marking the similarities and differences between then and now, like 18-year-old Nardos Felefele.

“I usually don’t get box braids, but recently I’ve been on a bit of a kick,” Felefele said. “And it happened to coincide perfectly for when we were taking the photo for this. And I was wearing black as well, and I look exactly like my younger self.”

Le also reflected on her hairstyle.

“Honestly, I don’t think I’ll ever get bangs ever again,” Le said. “I kind of rocked them in second grade. I feel like I’m so similar and so different at the same time.”

The side-by-side portraits also gave Stark and his students a chance to explore the idea of core memories, identity and personality.

“The more I looked through the photos, and in talking with the students that were in front of me, I started realizing they had grown a lot but their core identity was still intact: the same energy, if you will, a similar smile, a head tilt, a calmness,” Stark said.

Both Le and Felefele said they see their personalities shine in the photos from 10 years ago.

For Felefele, she can spot the sass that she says continues to be a big part of who she is today. Le can see seeds of her interest in fashion and design beginning to sprout.

“I did care a lot about how I looked: even that shirt — it says ‘rock star’ on it. I used to throw a huge fit about my hair in the mornings before I would go to school in the morning, as a kid. So now, with the dyed hair, being into makeup and fashion as a whole: I can see it,” Le said.

As part of the project, Stark asked his students to write a message to their younger selves. The messages were largely positive and he was happy to hear echoes of what he’s been trying to impart as a teacher over the years.

“As a teacher you’re not too sure if it connects, but that’s what I hope for them: that they just keep having that positivity,” he said.

Message to younger self

Felefele’s says the message she would send to her younger self is to feel secure in standing up for herself.

“Especially as a woman, and as a woman of colour — I wish that I had of known earlier that standing up for myself would be the most important lesson, and that’s how I’m going to get ahead in life: making sure my voice is heard, and not expecting anybody else to do the talking for me,” Felefele said.

Le, meanwhile, would give an extra dose of courage to her 7-year-old self.

“Growing up, was really, really, really scary to me. Every year that I went up a grade I would be so scared of everything, and so anxious all time,” Le said. “Growing up isn’t so scary. Change isn’t that bad and change is sometimes for the better. Even though some change is horrible — but you do grow out of it.”

Oh, and one more thing:

“Don’t ever get bangs again.”