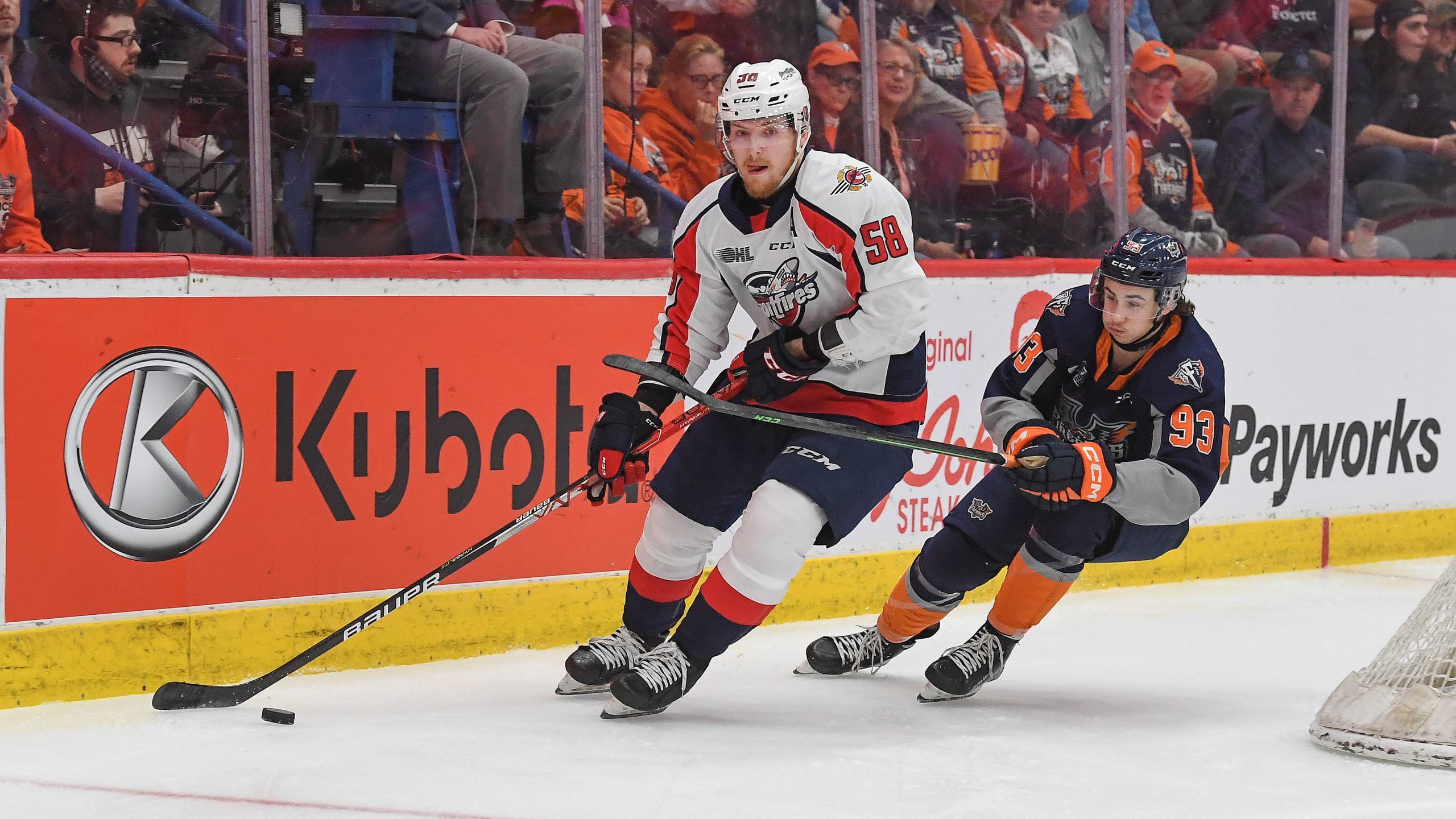 On the brink in so many ways, the Windsor Spitfires caught a breath of life on Tuesday.

Facing elimination on the road and trailing in the third period, the Spitfires rallied for a 3-2 overtime win over the Flint Firebirds before 3,206 at the Dort Financial Center.

Overage defenceman Andrew Perrott scored with 78 seconds left in the first overtime to keep the Spitfires alive in the series.

“It’s not over yet, but that felt good,” Spitfires’ head coach Marc Savard said. “We were in control the whole overtime.”

With the win, the top-seeded Spitfires evened the best-of-seven Western Conference final against the third-seeded Firebirds at 3-3. Game 7, to decide the series, is Wednesday at the WFCU Centre at 7:05 p.m.

“One more game here and we just have to be ready,” Savard said. “This is what we’ve worked so hard for to have home ice.”

For the fourth times in this series, the Firebirds carried a one-goal lead into the third period of game in this series. However, for the first time, the Spitfires were able to crack the wall of the Flint defensive approach to drop five players back, dump pucks and accept any icing calls and lean on goalie Luke Cavallin failed to produce a victory.

“We talked about what we could do differently and we responded well,” Savard said. “We dug deep and never cheated. We’ve told them when you do that, you’ll get rewarded and we finally did.”

The highest-scoring offence in the league during the regular season, Windsor got to extra time by scoring the team’s first goal in third period of the series when trailing after 40 minutes.

Originally, the Spitfires looked to have scored the equalizer just under six minutes into the into the final period. Josh Currie hit the post and the puck ended up in the net, but officials ruled Perrott had kicked the puck in.

However, overage forward Daniel D’Amico responded by pushing him a rebound off a shot from Alex Christopoulos just before reaching the midway mark of the third period.

“D’Amico had an unbelievable game for us,” Savard said.

It has been a frustrating series at times for the series, who held a lead in the first five games of the series and could just as easily wrapped this series up before Tuesday.

Windsor has outshot the Firebirds in five-of-six games, including Tuesday’s 57-33 advantage, and 263-197 overall in the series.

“Their goalie’s been fantastic and we’ve run into (good goalies) all playoffs,” Savard said.

However, too often an untimely Windsor miscue opened the door for the Firebirds to get back in a game.

On Tuesday, penalties proved to be problematic for the Spitfires, who twice fell behind by a goal.

A cross-checking call on Windsor rookie Christopher O’Flaherty less than three minutes into the game turned into a power-play goal by Flint’s Ethan Keppen to open the scoring.

Windsor responded just 12-seconds later when Jacob Maillet dropped a feed to D’Amico to get the Spitfires even after 20 minutes.

But the Spitfires, who boasted the third-best power play in the OHL in the regular season, had three manpower chances to take the lead after tying the game and failed to convert. Windsor has converted just four-for-23 (17.3 per cent) in the series for a unit that struggled throughout the playoffs.

“We had looks,” Savard said.

Flint used a two-man advantage for 51 seconds to take the lead after 40 minutes. Firebirds’ head coach Ted Dent used his timeout to get his stars rested and back for the two-man advantage after D’Amico and Wyatt Johnston were both handed slashing calls. Riley Piercey whipped a shot in from the faceoff circle to give Flint the lead.

Windsor failed to convert a carryover power play into third period and Flint once again tried the chuck-a-puck defensive approach only to see the Spitfires pull even on D’Amico’s goal to force overtime and set the stage for Perrott’s winner.

“We never panicked,” Savard said. “It was just a total team effort.”

Goalie Matt Onuska, who left Sunday’s game with an injury, was unable to return to action for Tuesday’s game. Xavier Medina made his playoff start for the club and made 31 saves with rookie Kyle Downey serving as the backup. Onuska is listed as day-to-day.

Forward Pasquale Zito, who was hurt in the third game of Windsor’s second-round series with Kitchener, remained sidelined on Tuesday. The Detroit Red Wings’ draft pick took the pre-game skate on Sunday, but missed his eighth-straight game on Tuesday.

The 21-year-old Staios, who was Windsor’s first-round pick in 2017, was the league’s top-scoring defenceman this season with 66 points in 59 games.