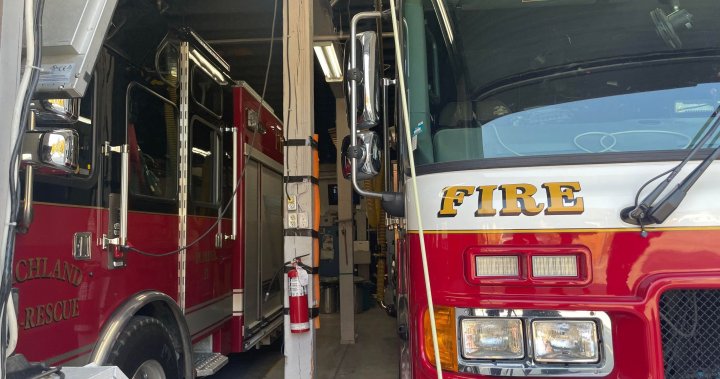 In just under two weeks, Peachland, B.C., residents will be able to vote on whether they want to borrow up to $17.5 million for a new protective services building and pay the tax increase.

The current fire hall is over 60 years old, and the Peachland fire chief, Dennis Craig, says the department has outgrown the building.

Crews have to maneuver through tight spaces while gearing up for calls. The garage has little to no room for crew members to walk around the trucks or open engine doors all the way.

During the day, the fire chief and deputy chief as well as an administrative emergency services clerk are in the hall with a complement of 40 paid on-call firefighters.

“It’s well outlived its useful service life. It was never actually built as a fire hall, it was built as a park or public works building. There’s no room for expansion and the building’s not really rendered suitable just to make it fit our needs going forward,” said Craig.

“The floor areas for firefighters to get dressed, to change, to respond to calls — it’s very, very tight and very crowded.”

He went on to say that there isn’t space in the current hall for the necessary upgrades to help keep crew members safe.

“We currently have no decontamination areas for the fire hall. When our members come back from a structure fire and they have the carcinogens on their clothing and on their bodies, we don’t have shower facilities here.”

Meanwhile, the project proposes to relocate the fire hall to an already district-owned property at the corner of San Clemente Avenue and 13th Street, away from the downtown core.

“Our community is growing, and response times are critical,” said Craig.

“We’re currently located right in downtown; we’re sandwiched between two playground zones on either end of us and we are fully paid on-call fire department.”

The new facility will house the fire department and may include other community safety services.

“We have been in consultation with BC Ambulance. They’re down the road from us in a very dilapidated building as well,” said Craig.

“We’re looking at moving BC Ambulance inside the fire hall, too, which will provide some source of offsetting the cost through a lease agreement.”

He went on to say that the project includes plans for a classroom for training. And when the space is not being used, community groups will have an opportunity to use the room.

According to Craig, the project has been in the works for several years and during the process, an advisory committee made up of nine residents was formed to provide input.

Members came from a variety of backgrounds. Some have fire hall experience, architectural experience, or project management experience.

“City council and the fire chief decided that it would be wise to have a select committee,” said Peachland Firehall Advisory Committee chair Gary Bale.

“The committee’s role certainly was to approach all the nuances of a new fire hall and provide some scrutiny and some due diligence to ensure that if a referendum was to proceed and go forward later on in the year, which is where we are today, that the due diligence would be put in place.”

But the proposed project does come with a hefty price tag and an approximately $125 tax increase for Peachland residents.

“I know the community is concerned with additional costs,” said Bale.

“I believe that, given the value of the project, given the fact that counsel and staff have the means to be able to reduce those costs to $125, in a year is super responsible. And I think the practical approach and the reason why it should proceed.”

Residents will be able to vote in the referendum alongside the civic elections on Oct. 15.