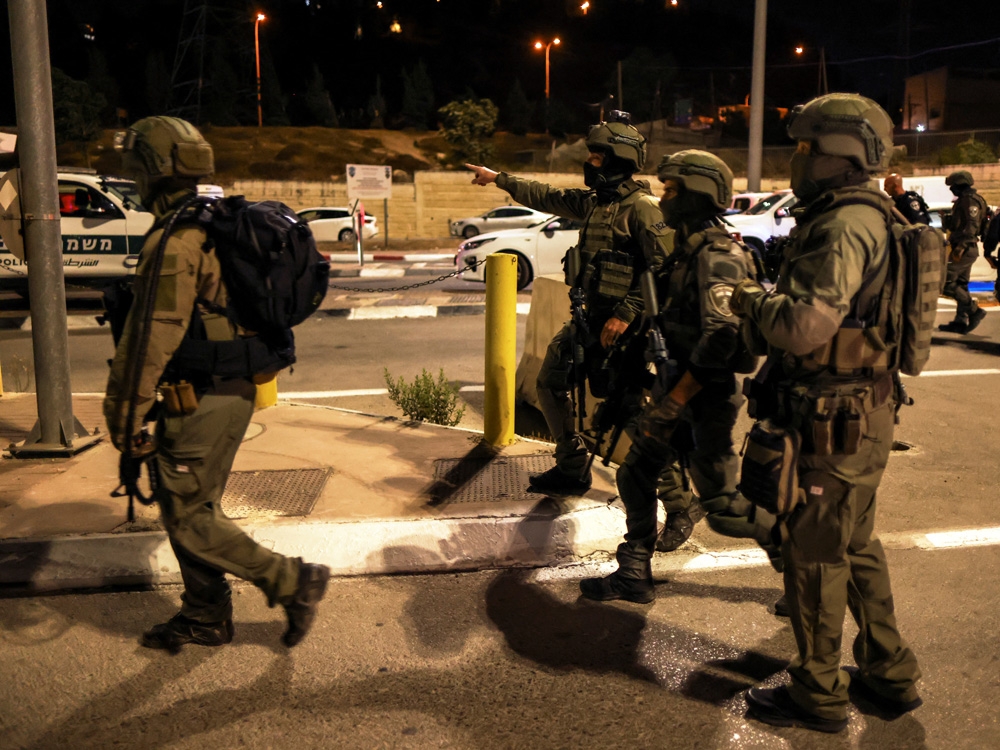 The attack came hours after a pair of Palestinian teenagers were killed during an Israeli military raid in the occupied West Bank.

It was the latest bloodshed in the deadliest round of fighting in the area in seven years. It also came less than 24 hours before Israel was to begin celebrating the weeklong Sukkot holiday, a time when tens of thousands of Jews visit the holy city.

Saturday night’s shooting occurred at a checkpoint near the Shuafat refugee camp in east Jerusalem. Police said the assailant got out of a car and opened fire, seriously wounding the female soldier and a security guard before running into the camp. The army announced early Sunday that the woman, who was 19, had died.

Police said they were searching for the attacker, with special forces and a helicopter involved in the search. Police said early Sunday that they arrested one person on suspicion of involvement in the attack, but were continuing the manhunt.

“Our hearts tonight are with the wounded and their families,” said Prime Minister Yair Lapid. “Terrorism will not defeat us. We are also strong on this difficult evening.”

Israel captured east Jerusalem in the 1967 Mideast war and annexed the area in a move that is not recognized internationally. It considers the entire city, including east Jerusalem, home to the city’s most important holy sites, to be its capital. The Palestinians claim east Jerusalem as the capital of a future state.

Israel already has been carrying out daily arrest raids in the occupied West Bank since a series of deadly Palestinian attacks inside Israel. Most of the military activity has been focused in the Palestinian cities of Jenin and Nablus in the northern West Bank.

Earlier Saturday, the Israeli military shot and killed two Palestinian teens during an arrest raid in the Jenin refugee camp, the site of repeated clashes between Israeli forces and local gunmen and residents. The camp is known as a stronghold of Palestinian militants.

Palestinian officials said soldiers entered the camp early Saturday and surrounded a house. In videos circulated on social media, exchanges of fire could be heard. The Palestinian Health Ministry reported two dead and 11 wounded, three of them critically.

The Palestinian Health Ministry identified the dead as Mahmoud al-Sous, 18, and Ahmad Daraghmeh, 16.

The Israeli military said it had arrested a 25-year-old operative from the Islamic Jihad militant group who has previously been imprisoned by Israel. It said the man had recently been involved in shooting attacks on Israeli soldiers.

It said soldiers opened fire during the raid when dozens of Palestinians hurled explosives and shot at them.

Just before noontime, the Israeli forces withdrew from the area.

The killing occurred a day after two Palestinian teenagers, ages 14 and 17, were killed by Israeli fire in separate incidents elsewhere in the occupied West Bank. Rights groups accuse Israeli forces of using excessive force in their dealings with the Palestinians, without being held accountable. The Israeli military says it opens fire only in life-threatening situations.

Israel says it is forced to take action because Palestinian security forces, who coordinate with the military in a tense alliance against Islamic militants, is unable or unwilling to crack down. Palestinian security forces say the military raids have undermined their credibility and public support, especially in the absence of any political process. The last round of substantive Israeli-Palestinian peace talks ended in 2009.

The violence is also fueled by deepening disillusionment and anger among young Palestinians over the tight security coordination between Israel and the internationally backed Palestinian Authority, which work together to apprehend militants.

U.N. Mideast envoy Tor Wennesland said he was alarmed by the rising bloodshed. “The mounting violence in the occupied West Bank is fueling a climate of fear, hatred and anger,” he said in a statement, calling on the sides to reduce tensions and take steps toward reviving a political process.

Israel captured the West Bank in the 1967 Mideast war and 500,000 Jewish settlers now live in some 130 settlements and other outposts among nearly 3 million Palestinians. The Palestinians want that territory, along with east Jerusalem and the Gaza Strip, for their future state.