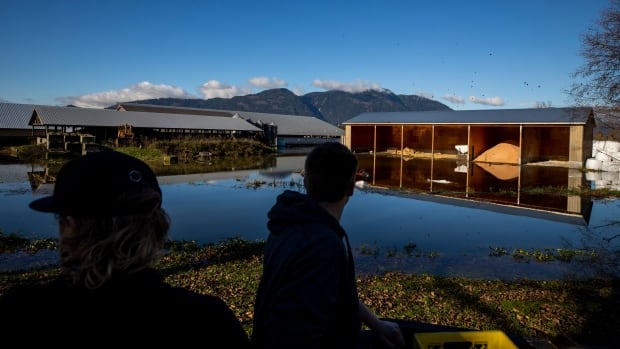 A new Senate report is calling on the federal government to work with the provincial and local governments in B.C. to create a better, more comprehensive flood relief plan to protect the Fraser Valley from disastrous flooding in the future.

The Standing Senate Committee on Agriculture and Forestry released its findings on Thursday after hearing from nearly two dozen witnesses about the disastrous effects of flooding last November and the support the province offered in the aftermath.

“There’s no time for red tape in the immediate aftermath of catastrophic flooding,” wrote Senator Paula Simons, deputy chair of the committee.

“The federal government should ensure that its agriculture and disaster relief assistance programs have enough financial and human resources to quickly support people, communities and businesses reeling from natural disasters.”

Record rainfall pushed the Nooksack River in Washington over its banks in November, spilling across the border into Abbotsford’s Sumas Prairie. The flooded area is a former lake that was drained about a century ago to create some of Canada’s most productive farmland.

In total, the report said the flooding in the Fraser Valley affected more than 1,000 farms, 2.5 million livestock and more than 150 square kilometres of land — an area equivalent to nearly half the size of the City of Abbotsford.

The witnesses spoke to the Senate committee this spring on several aspects of the flood, ranging from prevention and preparedness to survival and response.

One witness, University of British Columbia associate professor Brett Gilley said Ottawa or the province should consider the “politically difficult task of … buying people out” and moving them from the Sumas Prairie since it’s located on a flood plain — an idea Abbotsford Mayor Henry Braun has previously described as not “on the table.”

Nearly 90% of dikes not up to standard, engineer says

Another witness, hydrotechnical engineer Monica Mannerström, pointed to a 2015 study which said 87 per cent of the dikes in the Lower Mainland were “in less-than-fair condition,” while 71 were “expected to fail simply by overtopping” in the event of a flood.

Angela Foothof with the B.C. Broiler Hatching Egg Producers’ Association said it’s well known the dikes and water-pump station in the Sumas Prairie have needed major upgrades for many years.

The committee said the new mitigation plan needs to address the inaction.

“[The new, recommended] plan should include both a timeline for dike upgrades and the establishment of a committee to examine flood mitigation measures, as well as emergency preparedness and response strategies,” the report read.

In terms of cost, Mayor Braun said municipal governments don’t have enough money to cover flood mitigation infrastructure because they “receive only 8 to 10 cents of every tax dollar collected.”

“Characterizing the ‘downloading’ of infrastructure construction and maintenance costs to municipal governments as a ‘monumental mistake,’ Henry Braun argued that this downloading ‘needs to be addressed through providing municipalities with adequate financial resources,” the report said.

In April, Braun was among 28 British Columbia mayors who asked the federal government to deliver $5 billion in promised funding as soon as possible.

He said the estimated cost of bringing three dikes up to provincial standards was as high as $2.9 billion, with most of the funds expected to come from the federal government.

At the time, federal Emergency Preparedness Minister Bill Blair did not provide a timeline for when the money would be disbursed to communities but said there are some complexities in making decisions about prioritizing the spending of a limited amount of funding that will involve “difficult decisions.”

The Senate report on Thursday also found provincial and federal assistance offered to farmers in the aftermath of the flood was helpful in “certain instances” but noted some people ran into administrative problems when they tried to apply for the funding.

The report also recommended the Canadian and U.S. governments work together to address the risk created by the Nooksack River in Washington in future.