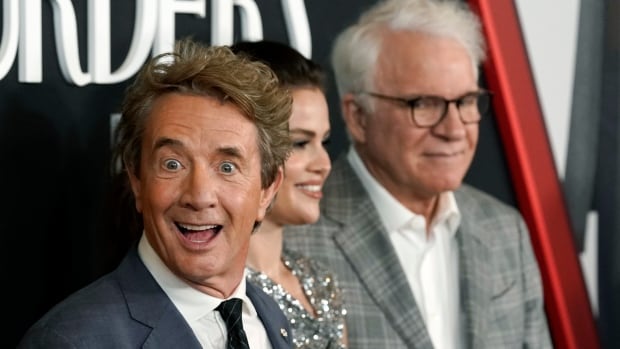 Canadian comedian Martin Short’s mind was far from the Emmys when he received a text Tuesday morning telling him he’d nabbed his 13th nomination.

He was in Ontario’s cottage country, watching American news.

“I was sitting down watching the Jan. 6 trial and I got a text from Ted Sarandos, head of Netflix, no less,” Short said in an interview from Muskoka. “Then I went to the email, and then a lot of texts came. But he was the first.”

The Hamilton-born Short landed the nod for his performance as broke Broadway director Oliver Putnam in the Hulu original “Only Murders in the Building.”

The show, currently in its second season, which Canadians can watch on Disney Plus, follows three true-crime obsessed residents of an old apartment building on Manhattan’s Upper West Side as they try to solve a murder — and make a podcast about it.

It picked up 17 nominations on Tuesday, including one for outstanding comedy series and four in the acting categories. Co-starring Steve Martin and Selena Gomez, it’s just been renewed for a third season.

Short said part of the appeal of the series is that it skewers the current cultural obsession with true crime stories. But it’s not a genre he’s particularly fond of, especially if it involves violence or graphic details.

“I think that the reason the show is popular is that it catches a wave of what people are intrigued by,” he said.

“But when it deals with, you know, bludgeoning … I’d rather see an old ‘Dick Van Dyke Show.””

While Gomez missed out on an acting nomination, she did snag one as executive producer on the show.

Meanwhile Short is nominated in the top acting category, where he’ll compete against Martin, his co-star and frequent collaborator.

“I do it all the time,” he said of going up against his friend. “On the set, in our concerts.”

Short and Martin first joined forces on screen in “Three Amigos!” in 1986, and reunited for 1991’s “Father of the Bride.”

More recently, in 2018, they co-created the Netflix original comedy special “Steve Martin and Martin Short: An Evening You Will Forget for the Rest of Your Life,” for which they received two Emmy nominations.

Jokes aside, Short said the duo’s dynamic is more collaborative than competitive, owing perhaps to his beginnings in the industry.

“I’m from ensemble,” he said. “I’m from Second City — SCTV — SNL. I’m used to sitting back and hoping that Eugene Levy and Andrea (Martin) will be as funny as they always are.”