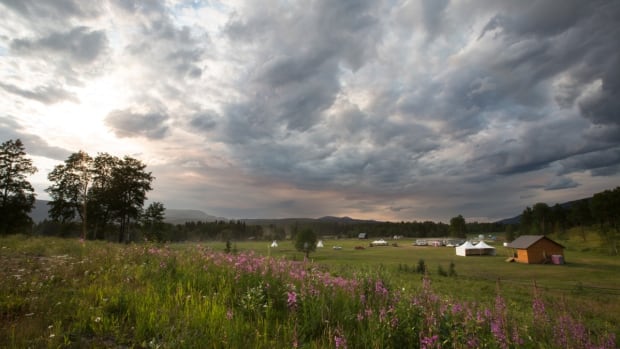 After 18 years in the making, the Doig River First Nation in northeastern B.C. is marking the beginning of a new three-hectare business hub  in Fort St. John, a development celebrated with an official ribbon-cutting ceremony Tuesday  —  National Indigenous Peoples Day.

The site is part of a Treaty Land Entitlement (TLE) agreement with Doig River and the nearby Blueberry River First Nations that hands over 52 square kilometres, or 5,200 hectares, of land in B.C. and Alberta. The reclaimed land was stripped from the Indigenous communities in the 1900s and opened for settlement.

“We’re really, really happy that people see the opportunity [to] move forward to manage our own resources.”

Oker said reclaiming the land and developing the business hub called Naache Commons — or Dreamers Commons — will allow the Nation’s 900 members to develop the land and create major business opportunities, such as building an eagerly-awaited gas station.

The TLE agreement follows a 2021 B.C. Supreme Court judgment that found years of extensive industrial development in the region violated the Treaty 8 rights of the Blueberry River First Nations. The province failed to maintain the nation’s rights to hunt, fish and trap without interference, said the landmark ruling which has helped to pave the way for new First Nations-led developments in the region.

‘Land promised but taken away’

A joint-release from the Doig River and Blueberry River First Nations says their members voted “overwhelmingly in favour” of the negotiated TLE settlements on June 15. That allows them to sign agreements with each other, the federal government, and the provinces of British Columbia and Alberta.

The Nations are both made up of descendants from the Fort St. John Beaver Band.

“Our community has been looking forward to this day since our claim was submitted to Canada in 1999,” said Doig River Chief Trevor Makadahay.

The federal government officially recognized the claim in 2004.

Makadahay said while it’s a time to celebrate, it’s also a time to “reflect on the hardships many of our elders went through over the years” at the hands of multiple governments.

Blueberry River Chief Judy Desjarlais said that after almost 20 years of negotiations, to finally reclaim the land “is a generational opportunity for our Nation.”

“Chief and council looks forward to working closely with membership to realize a community-driven vision for the settlement funds and lands,” she said.

Business hub a ‘return to our hometown’

Oker said over the past century the Nations have “definitely lost opportunities to build wealth and do business.”

“So we’re coming back to Fort St. John, our hometown, to build [our] urban reserve,” he said, noting he expects the land to be fully transferred back to the Nations by early next year.

The Naache Commons will be located across from Margaret ‘Ma’ Murray Community School, on the city’s western edge. Oker said future plans for the area include restaurants, traditional Indigenous health and wellness services, other commercial spaces and multi-family dwellings.

He said the ribbon-cutting ceremony held Tuesday included traditional prayers, dancing and food, while students from the nearby school sang in the Beaver language. Politicians and municipal officials from multiple levels of government attended.

“Everybody’s focused and … excited to get something going,” Oker said.

“We’re all ready for the challenge to build this amazing opportunity for the present and future generations.”